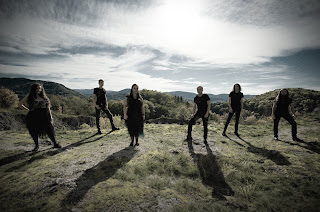 Band members answering in this interview are:

Kamil: I think Emerald Shine is a band that makes pretty unique music that is very hard to summarize. We call it fantasy metal even though sometimes it's not even metal, sometimes it's folk-metal with progressive elements but we don't usually brand ourselves like that, because it's very hard to describe it with just a few words. I'd say: "Buy a CD or go to Spotify and hear for yourself."

Kamil: Misty Tales is quite a huge leap forward in every way, also we had a lot more experience with recording and it was recorded by a line-up that suited the band perfectly.

3.The lyrics are based upon your own fantasy fiction based in Tolkien's world, can you tell us a little bit more about your interest in his work and what inspired you to write your own version of the fantasy world he created?

Leena: I have loved fantasy literature and especially Tolkien’s world for some 15 years. When I started writing my own lyrics, fantasy themes like the elves and Middle-earth often appeared in them.

And what inspired the story of the album Misty Tales – I would say it was the music itself. In the spring of  2017, when we had most songs and their lyrics for the album ready, I was wondering if they all could be joined into one larger concept… And after some time of thinking and listening, this fan-fiction-like story suddenly appeared in my mind crystal clear. All those already finished songs fitted the story very well, so all I had to do was to create the last missing parts, to write several more songs. It went very well, soon the whole story for the album was finished and I was satisfied with it.

4.What is the meaning and inspiration behind the name 'Emerald Shrine'?

Klára: First of all, you got the name wrong - it's Emerald Shine, not Shrine. But it's ok, don't worry, we're not upset. :D When Leena and Richmonde were establishing the band, they were just throwing to the ether some random ideas and one of them was Emerald Shine, but it doesn't have any deeper meaning.

Klára: We were looking for something minimalistic, simple but enlightening. The final artwork is made by the amazing artist Morgana La Fay and it tells the story of our album. Misty Tales is about a war between men and elves, how they used to live together in peace, which is being represented by the white thread in the hands of this dark character on the cover. Inside the booklet there is a similar picture, but the thread is torn and the war has begun.

Klára: I’m sure they had already played some good concerts even before I joined the band at the end of 2017, but since then, my most favorite performance was Housle, Chlast a Rock 'n' Roll in Prague, CZ.

Kamil: A concert that always comes to my mind is our show at Folk Metal Pilgrims in Ostrava, CZ. Great atmosphere, great food and drinks and most importantly – great fans.

Leena: The both above mentioned shows, as well as some other ones, were really good. I personally also enjoyed most of our concerts in Poland very much, the audiences were crazy and cool.

During our stage performance, we are, above all, simply enjoying the music, dancing during the folky parts and concentrating during those more difficult, progressive ones – but I believe it is better to see with your own eyes, either at one of our shows, or in our live videos, which are available hear: https://www.youtube.com/watch?v=lyr-KwUkMFk&list=PLoyC31M6Ef-VCDBTLIfdbRSatb8Ivui_Z

Klára: Of course! In March we are going to play at Noc Nárekov and after that we may visit Prague once again for Keltské úterý. We are planning attending festivals in the Czech republic, I think there are also some festivals in Poland and Slovakia (but not 100 % sure) and with some luck we could also visit Germany, Austria and other European countries.

Kamil: So far we don't think that we would have any benefits from labels that are available to us, but this might change in the future. We'll see.

9.On a worldwide level how has the reaction been to your music by fans of folk metal?

Klára: People have usually positive reaction when they hear/see us for the first time, because we may look like a basic folk metal band with recorders and violin, but our music is also full of interesting rhythms and harmony, unusual bar changes and generally our music is more than just four chords repeating. Especially fans from Poland accepted our music very well, but Czech and Slovak people seem to like our music as well.

Klára: I know that Elvenking and Blind Guardian were an important sources of inspiration, we are also often being compared to Eluveitie and we’ve been getting an inspiration from the band Wintersun lately.

Klára: I am an artist. When I don't do music, I like to draw and that's basically all I do in my free time.

Kamil: 90 % of my time goes to either practising or just playing music, but other than that, I like to spend time with my girlfriend or have a glass of whiskey a good cigar from my collection.

Leena: My non musical interests include skiing, hiking and fantasy literature of course. (But still, sitting in a calm place and writing music is by far my favourite activity in my life O:-) )

Leena: Thank you for this interview and for spreading the word about our band, as well as other bands in the metal scene!

Klára: Follow us on social media and listen to good music! 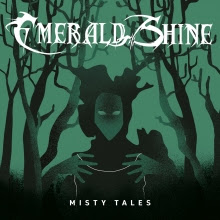 Posted by OccultBlackMetal at 1:31 AM No comments: