1-The band was founded in September 2012 by the guitarist Daniele, drummer Teo and bassist Erika. The initial idea was to create a similar product of Cradle Of Filth and Dimmu Borgir, very important bands for Cruenta LaCrymis' influences.
Daniele and Teo produce the material in a short time - in the studio of the guitarist were mixed aggressive riffs and melodic idea, together with concept of symphonic and horror.
In this moment the band must take a voice that would give meaning for the project.
After a various selection finally Elena joined the band. Elena offers a more personal style for Cruenta LaCrymis, also writing stronger lyrics.

2.So far you have released a full length and a demo, how would you describe the musical sound that is presented on both of the recordings?

2-The sound wants to be dark,melodic, powerful and aggressive.

4.What is the meaning and inspiration behind the name 'Cruenta Lacrymis'?

5.What are some of the best shows that the band ha splayed so far and also how would you describe your stage performance?

6-We're planning a promo tour in Italy for "Sweetness and blasphemy", with the intention to perform in other countries!


7.On a worldwide level how has the feedback been to your music by fans of symphonic black and death metal?

7-7-The album has just been released, but it seems to have a good response!

9-We will try even more dark and violent sonority,trying to maintain modernity in the sound and composition

11. Does Occultism play any role in your music?

Posted by OccultBlackMetal at 4:39 PM No comments: 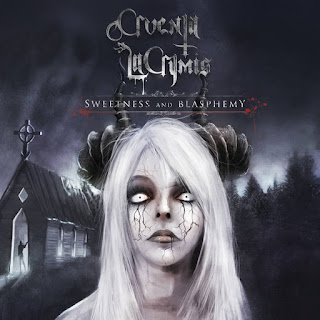 Cruenta  Lacrymis  plays  a  very  old  school  style  of  symphonic  black  metal  that mixes  in  a  great  amount  of  death  metal  influences  to  update  their  musical  style  for  the  modern  day,  the  production  sounds  very  professional  while  the  lyrics  cover  dark,  poetic  and  anti  religion  themes.

Posted by OccultBlackMetal at 4:09 PM No comments: