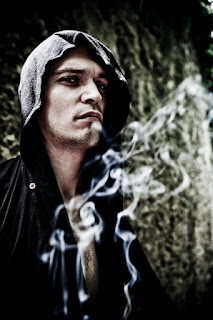 1.Can you give us an update on what has been going on with the musical project these days?
1. I haven't created new music for Golden Dawn since 2010. But I am working as producer, composer or studio musician for a handful of other bands and sometimes, when I donate really cool parts to those other projects, I think to myself something like "shit, this riff would be perfect for Golden Dawn, why are you giving it away". So maybe I will be able to keep the best ideas for myself in the future haha, then a new album could be done, but it is very hard for me to fulfill my own demands.

2.How would you describe the musical sound of the newer music?
2. To be honest, Golden Dawn should be judged on the basis of the early demos, the first and now re-released album, plus the unreleased albums "Sublimity" and "A solemn day" (hopefully they will also see a release, right now I think only a dozen of people has ever heard them). The official second album "Masquerade" was some kind of Gothic Black Metal with Power Metal influences, awfully artificial keyboards and even more awful vocals and production. The third album "Return to provenance" was mid-tempo Black Metal with some good creative moments but also some average songs without climax. Back then I wanted to write simpler songs without too much progressive touches, that could be good on stage, but out of a lack of good session musicians, a live performance never happened.

3.In between 2012 and 2017 ther has been no new music, can you tell us a little bit more about what has been going on during that time span?
3. I have my own recording studio and work as producer for a lot of bands. Also I kind of felt that I have nothing more to "say" in terms of progressive or symphonic Black Metal and I wanted to create simpler, more atmospheric and hypnotic music. This is why I started Rauhnåcht, which is my main band nowadays.

4.Some of your lyrics cover Shamanism, Sorcery and Lucid Dreaming, can you tell us a little bit more about your interest in these topics?
4. This is something I have been connected to since my childhood, I have also experienced lucid dreaming. This is when you realize that you are dreaming and start to have control over your dream. Then you can use the energy that is hidden within the dream to leave your body and take a trip to other worlds. For me, shamanism and sorcery are just ways that lead to an alternative perception of reality. We can walk this path when we understand that energy is much more important than matter and that we can control and use the universial energy with the powers of mind and soul. We are all creators of reality.

5.I know that the music project was named after the Hermetic Order Of The Golden Dawn, can you tell us a little bit more about your interest in Hermeticism and Western Occultism?
5. I read some books of Aleister Crowley and other "western sorcerers" when I started Golden Dawn, so yes, the name comes from there but for me, it is also a synonym for the state of enlightenment. Nowadays I am no longer into any kind of "system" or "teachings". I think that the core of most of this reflects a deep truth but also it is subject to man's misinterpretations and problems with our ego. The ultimate truth you can only find when you step beyond all systems and realize that they are all true and also wrong at the same time - which is in fact an "Eastern" thought out of Zen buddhism. As soon as something like spiritual truth is written down or put into systematic patterns, it loses its pureness as it can't be understood with the mind. Meditating or doing some Qi Gong moves in nature while focussing on my breathing often takes me closer to ultimate truth than anything that is written down in books.

6.At different times this band has been either a solo project of full band, can you tell us a little bit more about the decision behind forming a full line up before going back to working solo?
6. Well, I have the impression that I am quite good at taking basic ideas from others and enrich them. The results are often better than what I can create from scratch on my own. On the other hand I never found someone who really harmonizes with my way of perceiving music and also on a personal basis. Also I have to deal a lot with other musicians in my studio work, where it is my job to subordinate to their wants and needs, so I need the freedom to have projects where I am my own boss.

7.What where some of the best shows that the band had played back in the day and also how would you describe your stage performance?

8.Recently 'Casus Belli Musica' re-issued your 1996 album, can you tell us a little bit more about the newer version?
8. It is limited to 100 pieces on vinyl and has the original tape sound with only slight remastering. The cover artwork is looking really great, finally after more than 20 years this is how it should have looked like on the original. I want to express my discontent with the capitalist practises of Napalm Records here, they did the first repress on CD in I think 2001. Back then, the original label Dark Matter Records was already defunct, so they got the rights for free. Now they demanded 300 EUR for the rights to press the 100 LPs and even offered me to buy back all rights on my own for 1000 EUR. Dudes, that feels like when Nestlé takes the water from the poor and sells it back to them. When somebody out there is interested in "The Art of Dreaming", please either look for the original CD or for the new LP, but keep your hands off the Napalm release (which also has a bad remastering and artwork).

9.On a worldwide level how has the feedback been to your music by fans of black metal?
9. In the mid 90ies I got good feedback and letters from all over the world but when Black Metal turned bigger and hundreds of new bands emerged, of course Golden Dawn was not really in the focus anymore and got forgotten in the course of time. All the more surprised I was when I realized that my old demo stuff is still hunted by some collectors and all demos now finally saw a release on CD or LP. In general I think that many people are actually bored by today's Black Metal which rarely offers something fresh, also I think that today's highly edited digital fast food productions make people appreciate the older bands.

10.What is going on with some of the other bands or musical projects these days that you are a part of?
10. Actually quite a lot. With Rauhnåcht I have released a new split and plan an album (or double album) for early 2018. I am also working as "ghost writer" for a new band called The Negative Bias, the first album has been released via ATMF from Italy, in 2018 we will release a split EP with one Golden Dawn track from 2010 via Seance Records. Also I can mention the current/upcoming releases of Wallachia and Nocturne, where I also contributed arrangements and production. Then I am also about to finish a very calm Dungeon Synth/Ambient album, I still have to decide under which name and on which label it will be released. Oh, and I forgot to mention A portrait of flesh and blood, a new "international" band, the music comes from Japan, vocals from the USA and I am in the middle so to say and contribute keyboards and some additional arrangements. It will be a good mix of Symphonic Black Metal and Post Black Metal/DSBM, the first album will probably come on Zero Dimensional Records from Japan.

11.Where do you see yourself heading into as a musician in the future?
11. I think I will produce more calm, Synth-driven or symphonic stuff in the future but I am pretty sure that I will still feel the drive to do blast beats and tremolo guitars also. The way my music will go will reflect my personal development, so I am curious myself how it will sound haha.

12.What are some of the bands or musical styles that have had an influence on your music and also what are you listening to nowadays?
12. Definitely Bathory was a major reason for me to start making music, both the "Viking era" and the old albums. Also the advent of the second Black Metal wave with especially Emperor, Darkthrone, Burzum and Satyricon influcended me a lot. But I was also listening a lot to Doom and bands like Tiamat or My Dying Bride, which can also be recognized in my early demos. Apart from Metal I was a big fan of Dead can Dance and also listened to Ambient as well as Synth pioneers like Jean-Michel Jarre. I think that it was this big range of influences that made "The Art of Dreaming" a really diverse record. I must say that nowadays I still listen to many of the stuff I already liked as a teenager. Admittedly I do not follow the current extreme Metal scene very much.

13.What are some of your non musical interests?
13. I love to take trips through nature and do hiking or mountainbike tours in my local mountain areas. This is my way to set me free from all stress or daily routines. But music is part of nearly each and every of my days.

14.Before we wrap up this interview, do you have any final words or thoughts?
14. Thank you for your support and the opportunity to share some of my thoughts. To the people out there, even though Black Metal is an extreme style and most bands sing about negative or nihilistic topics - don't forget that music is art and there is no art without soul.

Posted by OccultBlackMetal at 11:21 AM No comments: 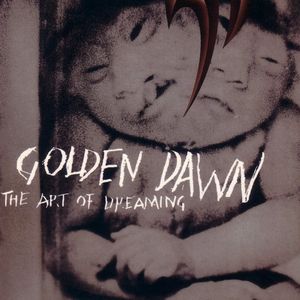 A  very  heavy  guitar  riff  starts  off  the  album  while  folk  instruments  can  also  be  heard  at  times  along  with  the  riffing  also  getting  very  melodic  at  times  as  well  as  the  music  mixing  the  symphonic  and  heavy  parts  together  and  acoustic  guitars  are  also  added  into  certain  sections of  the  recording.

Vocals  are  mostly  grim yet  high  pitched  black  metal  screams  while  the solos  and  leads  are  done  in  a  very  melodic  fashion  along  with  some  operatic  female  and  male  vocals  being  added  into  certain  sections  of  the  recording  and  when  the  music  speeds  up  a  great  amount  of  tremolo  picking  and  blast  beats  can  be  heard.

Golden  Dawn  played  a  musical  style  on  this  recording t hat  mixed  melodic  and  symphonic  black  metal  with  goth  and  medieval  folk  music  to  create  something  very  original  for  that  time  period,  the  production  sounds  very  professional  while  the  lyrics  cover  dreaming,  sorcery,  existence  and  other  dimension  themes.

https://www.youtube.com/watch?v=3vcO3-199sI
Posted by OccultBlackMetal at 6:54 PM No comments: