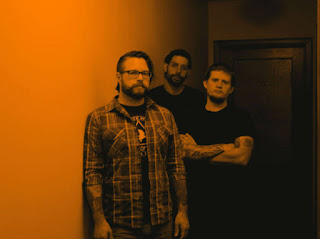 We are three friends who get together to enjoy music. We come from different musical backgrounds - Flood Peak is the product of it all.

2.In February you had recorded your first album, how would you describe the musical sound that is presented on the recording?

Religious beliefs and how they can be blinding. Hopelessness of living life while blindfolded.

4.What is the meaning and inspiration behind the name 'Flood Peak'?

One of our members, Peter, lived through some flood peaks growing up in Portland, OR. This made an impression on him, and he felt it was a good name for the project.

5.What are some of the best shows that the band has done so far and also how would you describe your stage performance?

Our second show (with Old Iron, Year of the Coyote, and Berator) was really fun. Our stage performance is heavy, energetic, and loud.

We’ve talked about it with friends from Lament Cityscape and Sól, but nothing is set in stone at this time.

We’d love to have a label to support us in the future. So far we haven’t been contacted by any labels, so DIY is where it’s at until further notice.

8.On a worldwide level how has the feedback been to your music by fans of black and sludge metal?

90-95% of the feedback has been positive. Two reviews were negative - one reviewer actually said our music taste sucked. Regardless of their words, I appreciate that they listened to Plagued By Sufferers and wrote about it.

I (Pierre; bassist) have my own solo project (Juracán; modern composition; ambient) and play bass for Vohké (post-rock, progressive rock).

It’s hard to tell. It really comes down to the writing process: members involved, flexibility, and openness to experimentation.

Amenra, Yautja, Celeste, and Mare are bands we respect greatly.

I (Pierre) am all over the olace: from Nils Frahm to Mare; from This Will Destroy You to Juan Luis Guerra.

Dylan loves comics, camping, video games, his dog, and sports (hockey for sure... but football too, maybe?)

We all love hanging out with family and good food.

I’d like to end by saying that music has been a part of our lives since we were teenagers. It doesn’t matter where we play music - our practice space, a recording studio, or a venue - we always have a good time.

If you catch us live, we will do our best to transmit the same energy and feel we put into our record.

Posted by OccultBlackMetal at 5:06 PM No comments: 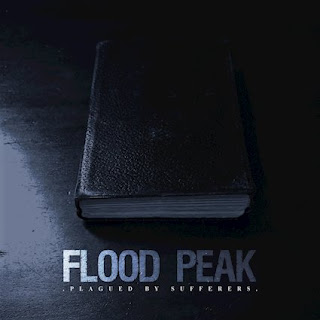 Atmospheric  sounding  synths  start  off  the  album  before  going  into  more  of  a  heavier  and  melodic  musical  direction  while  the  vocals  are  mostly  angry  sludge  style  screams  along  with  all  of  the  musical  instruments  having  a  very  powerful  sound  to  them  and  most  of  the  tracks a re  very  long  and  epic  in  length.

Flood  Peak  plays  a  musical  style  that  takes  black,  sludge,  doom  and  post  metal  and  mixes  them  together  to  create  a  sound  of  their  own,  the  production  sounds  very  professional  for  being  a  self  released  recording  while  the  lyrics  cover  bleakness  and  hopelessness  themes.