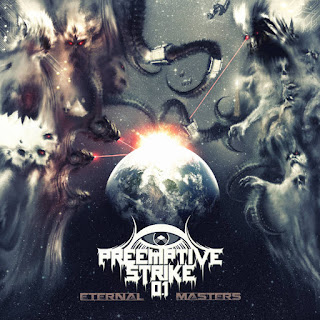 On  this  recording  PreEmptive  Strike  0.1  goes  for  more  of  a  blackened  style  of  electro-industrial  metal,  the  production  sounds  very  professional  while  the  lyrics  cover  science  fiction  themes.

https://www.facebook.com/PreEmptiveStrike0.1/
Posted by OccultBlackMetal at 7:41 PM No comments: 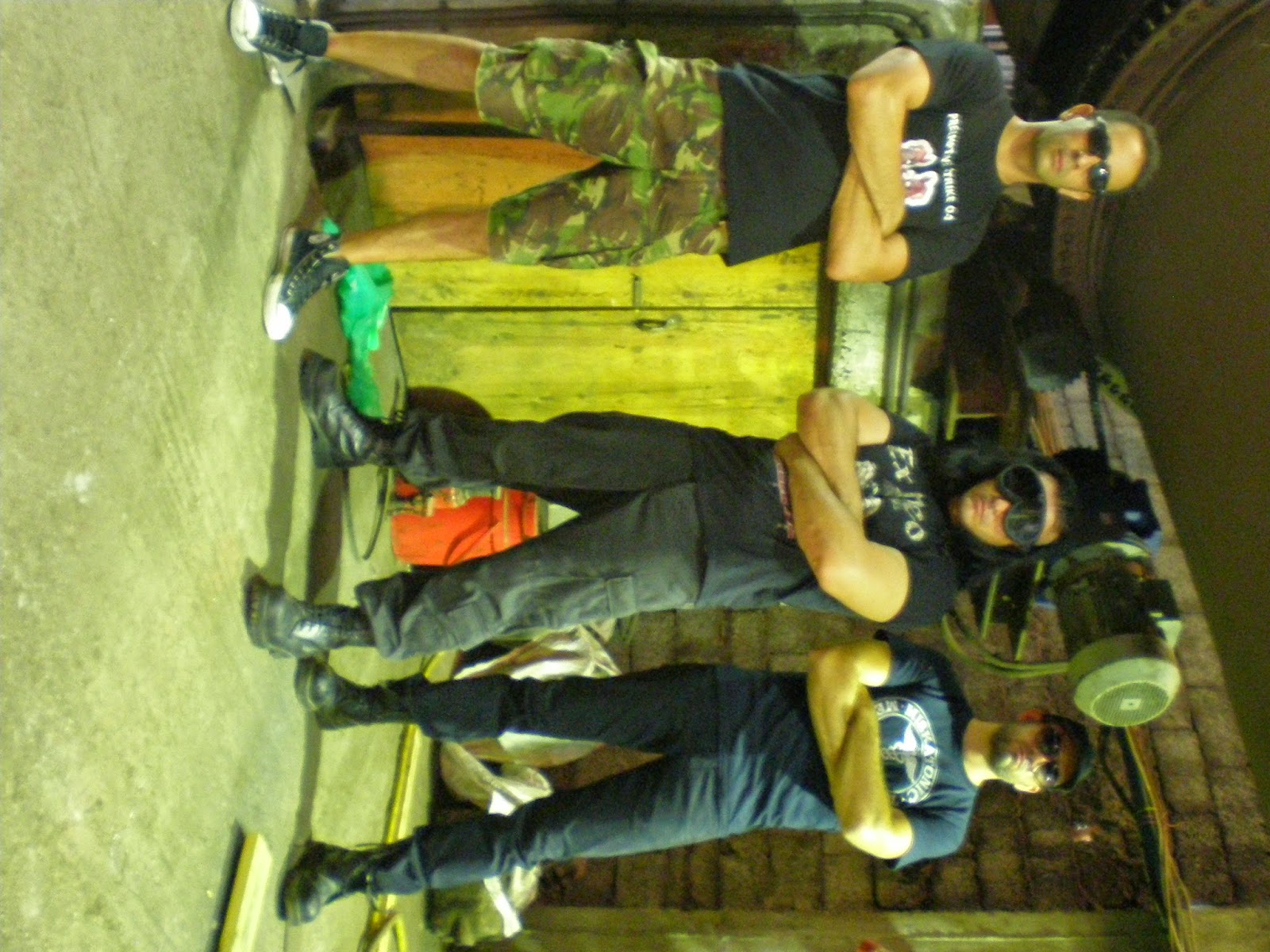 1.Can you give us an update on what has been going on with the band since the recording and release of the new ep?
JIM: We have just finished our new pure electronic CD(the 5th one) that will be released by the famous electronic label INFACTED RECORDINGS once again. But we will have a collaboration with the Polish old school black metal band BLACK ALTAR. This will be a hard, guitar-driven track that will surely interest the extreme metal fans that read this interview. Besides this we have done a cover of a well-known song of the power metal band SABATON!

2.Recently you have released a new ep, how would you describe the musical sound that is presented on the recording and also how does it differ from the stuff you have released in the past?
JIM: Well our sound can be describe as dark electro with hard guitars and a combination of distorted industrial vocals and death/black metal growls! Note that we avoided using danceable beat (except on the last track that is a remix) even though we have drum programming. In the 2 exclusive tracks of the vinyl we used real drums including a blastbeat. Surely as a whole the mcd and the vinyl differ a lot of our 4 previous dark electro cds, but it is close to the remix mcd that we did last year with AD HOMINEM. On each of our last 2 cds we had a collaboration with an artist from the extreme metal scene or some guitar driven tracks. So the original PIERCE THEIR HUSK is taken from our 4th cd‘’TALOS’’ and one alternative version of INTERSTELLAR THREAT can be found on our 3rd cd :”THE KOSMOKRATOR’’.

3.This is the first recording to be released in the past 2 ½ years, can you tell us a little bit more about what has been going on during that time frame?
JIM: During these 2 1/2 years we did a remix mcd for AD HOMINEM named SLAVES OF GODS TO THE GALLOWS but unfortunately their label (DARKER THAN BLACK) didn’t promote it as it should so many people thought that we were inactive during this period.

4.What are some of the themes and concepts you bring out with your musical sound?
JIM: Generally sci-fi themes that have to do with the sci-fi b movies of the 50s. So we have written about all the possible ways that aliens can invade the earth! With spaceships, with flying saucers armed with deathrates, with burried capsules that wait aeons to function again, as beings that have morbid plans to resurrect the dead on earth, as microorganisms, as plants, as insects mutations, as human replicants and with any possible way that these legendary movies have described! I could write many pages about my lyrics that have to do with alien invasion! My favorite of all is the battle of earthlings with alien insects about which I have written 3 tracks so far…. Apart from this, we have also written about horror themes and on our 2 latest cds about Greek mythology.

5.What is the meaning and inspiration behind the name 'PreEmptive Strike 01'?
George: A preemptive strike is a tactical military surprise attack with the aim to destroy the enemy’s ability to respond or retaliate. We chose it because it is fitting for the sci-fi themes our lyrics usually refer to. It was a cool and unusual name, memorable too, and noone had used it before so we went for it.

6.What are some of the best shows that the band has played over the years and also how would you describe your stage performance?
JIM: The answer to this is very easy: We did 2 great shows in May of 2007 one in Edinburgh in the Dark City festival and later one show at the famous WAVE GOTHIC TREFFEN in Leipzig in front of 1500 people.

7. Do you have any touring or show plans for the future?
JIM: Yes we have plans but first the organizers should book us to play....It is really sad that since 2007 we haven’t played outside Greece. Probably we have to find a tour manager or agency to book us for some shows abroad. So if a promoter is read this interview....We ask only for the tickets and the accommodation for 2 persons...

8. On the new album you had a few quests, can you tell us a little bit more about what they contributed to the ep?
Jim: Yes definitely, Niklas Kvarforth of Shining sung on some of our songs specifically on the vinyl.(PIERCE THEIR HUSK, THE WAR AGAINST THE BUGS, INSECT INTRUDE) Then Kristoffer Oustad and Eddie Risdal from the Norwegian Death metalers V28 contributed some vocals and guitars on our song INTERSTELLEAR THREAT. Then we did together with AGGREASH and Nephastus(ex BELPHEGOR,ex DEBAOUTCHERY ,ex ZOMBIE INC) from the German black/death industrial metal band LYFTHRASYR the song ‘’THE NEW ERA OF IMMORTALITY. Regarding the remixers, the guys from SKILTRON NV101 are members of the black metal bands ENSHADOWED and VULTURINE. Behind the remix from NYNE is PSY CON NYNE the guy that plays live guitars for SEPTIC FLESH when they tour worldwide. VIGILANTE is one of the biggest names in the industrial metal scene and finally the last remix is done in collaboration between the dark electro bands NANO INFECT and DEGENERATED SEQUENCES

9.The new ep was released by Sonic Hell Records, can you tell us a little bit more about this label?
Actually it is a sub label of the serious and elitist Polish black metal label ODIUM RECORDS. Shadow, its owner, has decided to establish Sonic hell in order to release more dark electro, industrial and ambient stuff. We made the start and we are hoping he does not regret it and releases cds from other bands too. His promotion work is the same as the one he does with his main label so his bands have worldwide promotion and distribution to the metal audience and fans.

10. On a worldwide level how has the feedback been to your newer recording by fans of harsh electronic music and extreme metal?
It is positive so far but it is still too early. I was afraid that this release possibly is too metal for the dark electro fans and too electronic for the extreme metal fans but we received very good reviews from both and we managed to enter the German electronic web charts - something that we didn’t expect! I think of course that the name of Niklas Kvarforth played its role ;)

11.Where do you see the band heading into musically during the future?
This year we added a new member to the band (YIANNIS DESEQ) that contributes with synths and production aspects. He adds a ‘’more epic’’ touch to our sound so we will continue to release dark electro releases via INFACTED RECORDINGS and on each release we will have at least one collaboration with artists from the extreme metal scene. If we collect again a number of such collaborations we will gather them on a cd and possibly we will release it via a metal label as we did this year.

12. What are some of the bands or musical styles that have had an influence on your newer music and also what are you listening to nowadays?
Jim: Well I think that our sound is unique in general especially in our last 2 cds. Initially we were influenced by S.I.T.D., DECODED FEEDBACK, GOD MODULE but this is past now. But I can easily tell what I am listening to nowadays as I follow and buy new music in cds and vinyl continuously.
From the dark electro/ebm scene (that is 70% of my purchases) I like: FEINDFLUG, FUNKER VOGT, E-CRAFT ,TYSKE LUDDER, HEIMATAERDE, HOCICO, DECODED FEEDBACK, SUICIDE COMMANDO, FRONT LINE ASSEMBLY, FGFC 820. From the metal scene (that is the other 30% of my purchases) I like RED HARVEST (My favorite metal band ever), SUMMONING, RAMMSTEIN, FEAR FACTORY, ALESTORM, SEPTIC FLESH, EX DEO,SAMAEL, FINNTROLL, AMON AMARTH, MINISTRY,ROB ZOMBIE. Btw the best cd that I have listened to in 2014 so far is ‘’TITAN’’ by SEPTIC FLESH!
George :S.I.T.D,E-CRAFT,DECODED FEEDBACK.ASSEMBAGE 23,FRONT LINE ASSEMBLY from the dark electro/ebm scene and I also listen to various genres of metal and even trance/edm

13.What are some of your non musical interests?
Jim: For 20 years now I have had the same interests! I am into hard body building (which is where the nickname JIM ‘THE BLASTER’ originates) and I also playing football and I am really fanatic with my football team and with this sport in general. Besides sports I am always buying tons of CDs and vinyls and I watch sci-fi and horror films.
George:My hobbies are reading and comprtitive gaming

14.Before we wrap up this interview, do you have any final words or thoughts?
Thank you very much for the interview. Even we have given tons of interviews to the printed or the web magazines that belong to the dark electro/ebm scene this is the first interview that we have done with a web magazine from the extreme metal scene so we are really glad about this. And we finish this interview with a statement: “Dark music is one, whether it is extreme metal or dark electro. That is a fact’’.
 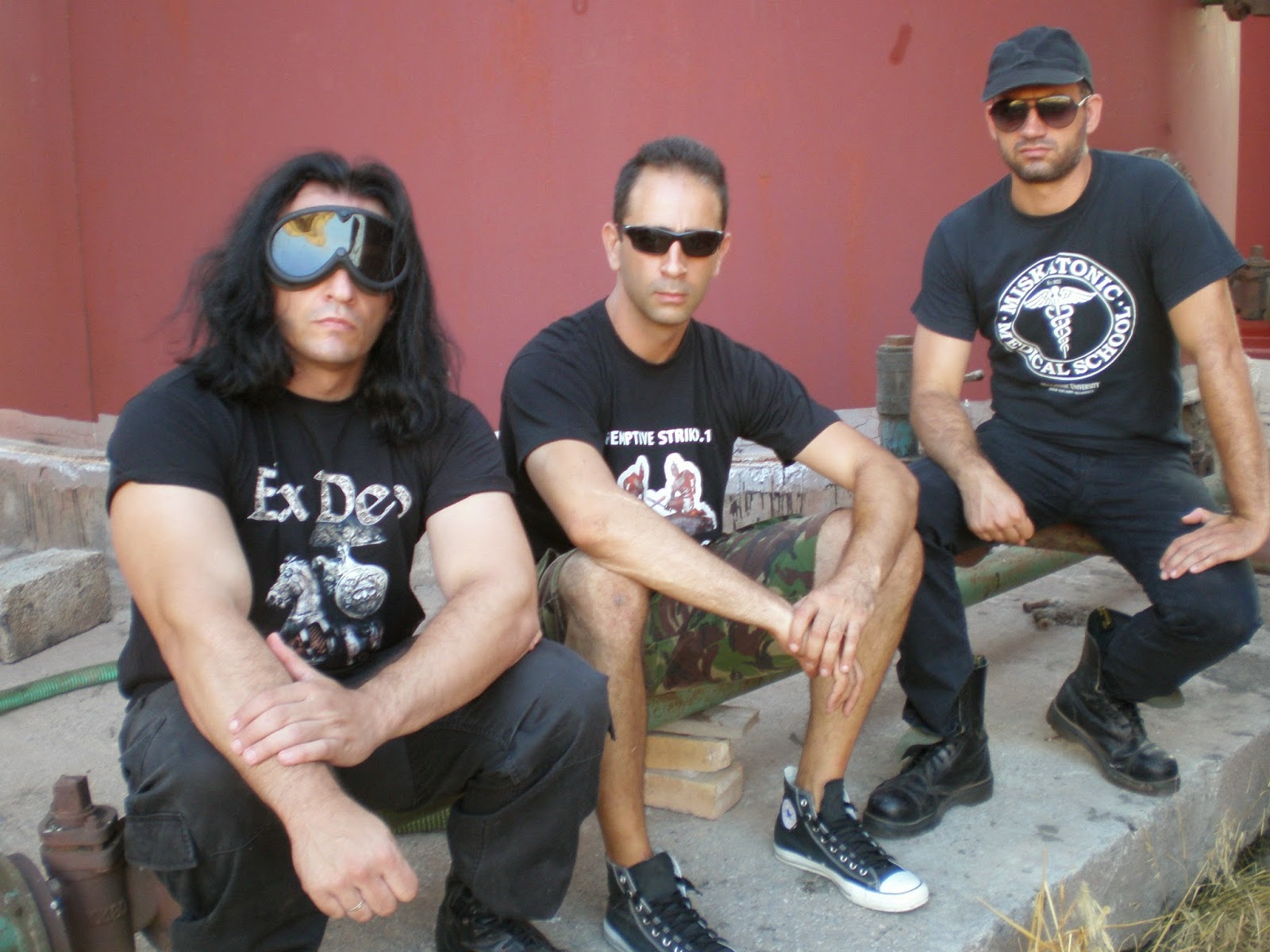 https://www.facebook.com/PreEmptiveStrike0.1/
Posted by OccultBlackMetal at 11:48 PM No comments: 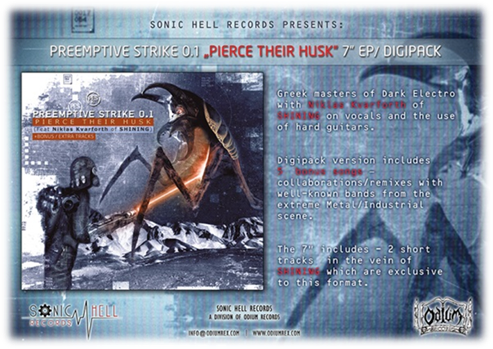 PreEmptive  Strike  takes  a  harsh  and  dark  form  of  electro/industrial  and  brings  in  heavy  guitars  and elements  of  black  metal  to  create  a  sound  of  their  own  and  the  album  also  has  Kvarforth  of  Shining  doing  some  quest  appearances  on  a  couple  of  the  tracks,  the  production  sounds  very  professional  while  the  lyrics  cover  violent,  hateful,  political  and  war  themes.