Rise Of The Stateless Wolf Interview

A. - The R.O.T.S.W. project start in 2019. At that time all of us are involved in our strictly esoteric black metal project called Nurmur. We decided to put our force and dedication into a new entity, where our musical attitude and styles will not be caged into a specific genre/scene. The mission: explore meditative sound and turn them into furious vehemence.

2.So far you have released an ep, can you tell us a little bit more about the musical style you went for on the recording?

A. - A dark mixture of our influences/style put together to match the lyrical concept. Crust/d-beat drum pattern and Black-Death metal riffs to give a violent ripetitive-obsessive texture and furious, low and not so clean vocals.

3.What are some of the lyrical topics and subjects the band has explored so far with the music?

A. - The main lyrical topic is simple yet ambitious: the eternal climb to the one's self Holy Mountain, and the risk of failure that a quest like this can involve.
In fact, this EP is dedicated to Emilio Salgari, a famous Italian writer of the past century who has write hundreds of book describing in details places and territory he never visited. A man with a powerful and limitless mind. In the same powerful way he ended his life with Seppuku. The ritual suicide.

4.What is the meaning and inspiration behind the name 'Rise Of The Stateless Wolf'?

A. - After thousands of years of migration under persecution, the wolf is indeed a stateless animal. Driven by his instinct of survival, that made him the antithesis of the modern man...let's celebrate him, he didn't surrender!

A. - The Elephant's head with a broken tusk...will forever be our animal guide. In the induistic tradition he represent the instinct of survival, destruction of obstacles, equilibrium, an archetipe full of simbolic meanings. To put him on our first cover art was more mandatory than natural.

6.Has the band had any opportunities to do any live shows yet?

F. - We had to do our first concert in May, but due of Covid-19 virus that is scourging our country, everything is postponed.
We will be ready when the time comes.

7.The ep was released on 'Italian Extreme Underground', can you tell us a little bit more about this label?

F. - Italian Extreme Underground is my DIY label/distro. Born in 2014 as a Facebook page (still active), it turned into a label/distro a few years later and has a dozen releases.
For info: https://www.facebook.com/italiaextreme / http://ieudistro.altervista.org / https://italianextremeunderground.bandcamp.com

8.On a worldwide level how has the reaction been to your music by fans of black, sludge metal and hardcore?

F. - We are trying to get our music out of Italy, at the moment we don't have much feedback from abroad. But those few we have, they have been positive.

9.When  can we expect a full length and also where do you see the band heading into musically during the future?

F. - After this EP is it worth considering the idea of doing a full-length? We do not know this.
When we meet after this quarantine period we will think about the path that our project will take.
Musically we set no limits. We take every source of inspiration and even this dark moment of our life will help us, especially for the lyrics.

A. - Musically speaking, our main influences are the Crust/D-beat fury of acts like Discharge and Wolfpack; the lyrical and atmospheric exploration of Inquisition and few other Black Metal band, the old-school thrash and death metal scene, particulary the album Schizophrenia from Sepultura and the complete discography of Bolt Thrower. Godflesh and Mysticum for the use of drum machine. And some neo folk act like Death in June and Current 93.
Speaking of new band, Mitochondrion, Portal, Youth Code.

A. - Read, study, meditate and training for the end.

A./F.- We want to thank again your 'zine for giving us this space to promote our project and for the review...OSU

https://www.facebook.com/rotsw/
Posted by OccultBlackMetal at 10:24 PM No comments: 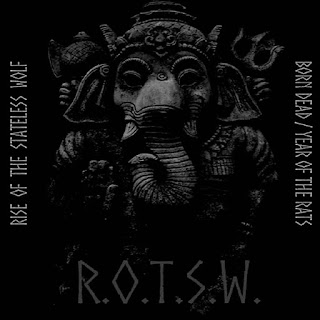 Dark  sounding  synths  start  off  the  ep  before  adding  in  a  very  powerful  sounding  bass  guitar  while  the  slower  riffing  brings  in  elements  of  sludge  metal.  Vocals  are  mostly  blackened  metal  screams  along  with  the  mid  tempo  sections  of  the  songs  showing  an  influence  of  hardcore.

Rise  Of  The  Stateless  Wolf  plays  a  musical  style that takes black  sludge  metal,  crust  and  hardcore  and  mixes them  together  to  create  a  sound  of  their  own.  The  production  sounds  very  dark  while  the  lyrics  cover  spiritual  and  death  themes.