1.For those that have never heard of you before, can you tell us a little bit about the band?
Selvans is the celebration of Italic folklore and cults -  through lyrics, music and aesthetics -inspired by the different traditions of our nation.

2.So far you have released a single, ep and a full length how  would you describe the musical sound that is presented on those recordings?
It’s atmospheric black metal with archaic and modern Italic 'folk' instruments; the lyrics – in italian, english but also middle Italy dialect and latin – are about Italian history, legends and fables from different time periods and different points of view.

3.Your lyrics cover the different ethnic groups from Italy that dwelt there before in the past, can you tell us a little bit more about this concept?
I don't consider it a concept album: as I’ve already said, I am simply attracted by 'the other side of the coin' so I chose not to tell only facts about my region or my town, by the point of view of my ancestors possibly brave and pagan (as is fashionable). I like to study topics that interessed me so I have written songs with lyrics about the mount Soracte or the river Clitunno which are kilometers far away from me, simply documenting about their role in the ancient times and visiting them to breathe that atmosphere imagining tales and facts about braves and cowards that dwelt there before me.

4.Can you tell us a little bit more about the meaning behind the masks?
They are inspired by the Hirpi Sorani myth, an etruscan legend: the priests devoted to the god Soranus could turn into wolves, probably because they were cursed. A track on the album is also named Hirpi Sorani, you can find the lyrics on our website www.templeofselvans.com

5.What is the meaning and inspiration behind the name 'Selvans'?
Selvans or Silvanus is an ancient divinity who represents nature, and particularly the woods are the perfect scenario for our stories: such mysterious and unchanged places are the only real thread among our songs.

6.Currently there are only 2 members in the band, are you planning on expanding the line up in the future or do you choose to remain a duo?
We’ll remain a duo.

7.At one time both of the members where in Draugr, is this band a continuation of your previous group?
No, it has nothing to do with that project. I gave a lot to Draugr because this is the way I am, but what I now do with Selvans is what I feel I should have done from the beginning.


8.On a worldwide level how has the feedback been to your music by fans of black metal?
Astonishing. We are very surprised by the how the foreign zines and fans are welcoming ‘Lupercale’...this is probably because even if the themes and melodies are Italian, the general atmosphere is universal.

9.Where do you see the band heading into musically during the future?
We’ll see in the future. All I can say is that some of the innovative elements you can hear in ‘Lupercalia’ will be developped in the next album.

10.What are some of the bands or musical styles that have had an influence on your music and also what are you listening to nowadays?
I listen to metal, rock, ambient, folk music and other kinds of music, that are apparently far from my works: electro, punk, italian and french songwriters, jazz...
About the influences I’d say Inchiuvatu and the eastern heathen black metal scene Nocturnal Mortum, Kroda, Negura Bunget...), but, as I told you, both Sethlans and I are influenced by everything we listen to.

11.What are some of your non musical interests?
Literature and literary essays (mostly historical and revisionist), sports.

12.Before we wrap up this interview, do you have any final words or thoughts?
Thank you for this interview! Greetings to the ADifferentShadeOfBlackMetalZine readers...check our ‘Lupercalia’, you won’t regret it.

Posted by OccultBlackMetal at 11:47 AM No comments: 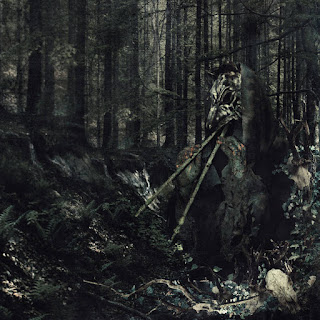 Nature  sounds  start  off  the  album  along  with  some  folk  instruments  and  epic sounding  keyboards  which  also  leads  up  to  more  of  a  heavy  and  symphonic  black  metal  style  which  also  incorporates  a  great  amount  of  melodic  guitar  solos  and  the  fast  parts  also  bring  in  a  great  amount  of  blast  beats  and  you  can  also  hear  all  of the  musical  instruments  that  are  present  on  this recording.