1.For those that have never heard of you before, can you tell us a little bit about the band?
Hello, we are “Bjarm” from Severodvinsk, the north of Russia. The band was founded in 2009 by Egor Vorobiev, Oleg Ivanov and Alexey Miroshin. Andrew White and Anastasia Angie joined us later.

2.Recently you have released your first full length album, how would you describe the musical sound that is presented on the new recording and also how does it differ from the demo you had released in 2010?
It’s hard to say, most likely the new album is a mix of several genres. The sound is now more diverse, the emphasis is on keyboards. Guitars are purposely taken away into the background, they mainly add volume. The demo was a bit simplier and more even.

3.This is the first release that has been released by the band since 2010, can you tell us a little bit more about what was going on during that time period?
We had several concerts for supporting our demo album. Also we were making the new material. After that we were recording Imminence and shooting video clip. Moreover we had photo shoot that time. The recording needed more time than we expected mostly due to the lack of experience. But as we believe, we succeeded in making Imminence.

4.What are some of the lyrical topics and subjects the band explores with the music?
As for the lyrics, the new album continues the tradition of demo-forerunner and evolves the theme of the fatalism’s grave philosophy. It’s told here about the price of life and will, immortality and omniscience. The basis consists of ancient Scandinavian myths which were rethought religiously.

5.What is the meaning and inspiration behind the name 'Bjarm'?
When we were thinking about the band's name, there were a lot of versions. Were looking for a short and memorable name. It turned out to be not so easy. After long-time discussions we have chosen “Bjarm”. "Bjarmia" was the name of our region at the Viking Age. "Bjarm" is a native of this territory.

6.What are some of the best shows that the band has played over the years and also how would you describe your stage performance?
Probably the first one was the best. We were preparing for it very thoroughly. That was the first live show for most of us. We were worried a lot but everything was great. In fact we try to make every live show better than the previous one.

7.Do you have any touring or show plans for the new album?
Yes, we planned European tour this summer, but unfortunately we could not go there due to technical reasons. We are going to have several live shows in Russia this autumn. But we are not sure about them yet. Follow the band's news.

8.On a worldwide level how has the feedback been to your music by fans of symphonic black metal and death metal?
Reaction of the foreign listeners is very positive. But in Russia this genre is not very popular, that’s why we found more good opinions abroad. Of course there are some shortcomings in our album, we will take it into consideration in our following releases.

10.Where do you see the band heading into musically during the future?
Good question! We want to create high quality music and convey it to the huge number of people. We suppose every musician wants to do the same thing.
Hope we can do it soon.

11.What are some of the bands or musical styles that have had an influence on your music and also what are you listening to nowadays?
At the first time Dimmu Borgir, Graveworm, Amon Amarth, Septic Flesh, etc. had a strong influence on us. But there are no preferences now. All band members listen to different musical genres.

12.What are some of your non musical interests?
Egor is occupied with video editing and graphics. Anastasia's hobbies are roller skating and foreign languages. Alexey likes cycling and travelling.

13.Before we wrap up this interview, do you have any final words or thoughts?
Thanks to everyone who supports Bjarm, hope to see you at our concerts soon!

Posted by OccultBlackMetal at 4:03 PM No comments: 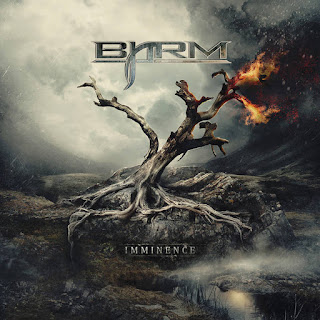 Bjarm  stick  to  mostly  a  symphonic  black  metal  direction  on  this  album  while  having  a  more  blackened  death  metal  approach  to  vocals  along  with  a  small  amount  of  gothic  elements  to  create  the  sound  that  you  hear  on  this  album,  the  production  sounds  very  professional  while  the  lyrics  cover  dark  and  metaphysical  themes.

Posted by OccultBlackMetal at 9:12 PM No comments: