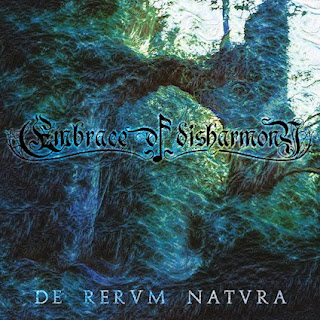 Dark  sounding  synths  start  off  the  album  along  with  some  spoken  word  parts  also  being  used  briefly  which  also  gives  the  music  more  of  a  ritualistic  feeling. At  times  the  songs  also  mix  the  avant  garde  and  heavy  parts  together  along  with  all  of  the  musical  instruments  having  a  very  powerful  sound  to  them.

Elements  of  goth  can  also  be  heard  on  some  of  the  tracks  as  well  as  some  death  metal  growls  also  being  used  in  some  parts  of  the  recording.  Some  songs  also  add  in  a  small  amount  of  stringed  instruments  and  one  track  also  introduces  acoustic  guitars  onto  the  recording.  The  production  sounds  very  professional  while  the  lyrics  cover  dark,  poetic  and  mythological  themes.

Well, not too much, since the production was finished just a few months ago! We had a brief pause, and now we are focused on preparing ourselves for promoting the album with a proper live activity.

2.You have a new album coming out in May, can you tell us a little bit more about the musical direction of the new recording and also how does it differ from your previous ep and demo?

With the album we kept walking the path sketched with the previous recordings, from which we have taken four songs out of nine. This time we improved performance and production to a professional level, and for what concerns the sound we have added a touch of theatricality. The arrangements on the album often feature the presence of a full orchestra, which was absent in the previous ep and demo.

3.This is the first release since 2010, can you tell us a little bit more about what has been going on with the band in the last 4 years?

Things moved rather slow. At first we had some serious lineup problems. In 2011 Emiliano Cantiano (Shores of Null, Noumeno) joined the band on drums and we started rehearsing the new songs. Then in late 2012 we started the production of the new album which took a whole year, mainly for reasons not depending upon us.

4.The new album has a concept, can you tell us a little bit more about the lyrics the band has on the new recording?
It’s not a concept album “tout court”, but there’s an underlying theme that permeates it and characterizes the mood of the entire work starting from its title. In ancient Greek mythology Ananke was the personification of fate and every song in our album is about human beings facing their destiny, palely surrendering to it or trying to change its course. Some of our lyrics are about fictional characters like Elric of Melniboné or the main character of Poe’s short story “A descent into the Maelstrom”, some others are not related to a specific figure but totally tied to this leitmotif.

5.What is the meaning and inspiration behind the name 'Embrace Of Disharmony'?
It has been a hard decision to make: we wanted a name that could recall both the vocal interweaves that characterize our music and the progressive and sometimes disharmonic streak of it.

We played as opening act for Haggard (December 16, 2012) and Orphaned Land (October 22, 2013). In both cases it has been an honour to play our songs with such bands that, in addition to be internationally known, are extremely important in our cultural background.

Not yet, but we will surely try to boost our live activity as much as possible in order to promote the album and the band at our best!

8.On a worldwide level how has the feedback been to your music by fans of extreme, progressive and avant garde metal?

Without a full length and a label, things that we have only now, it is difficult to be exposed to a high number of people, so this question will have a complete answer in some months. Up to now feedbacks from reviews and live reports around the internet were positive, with some peak of appreciation, hence we can consider ourselves to be satisfied.

9.Are any of the band members involved with any other musical projects these days?

Our drummer Emiliano is involved with many other bands: Noumeno, an instrumental Prog Metal band, which have just completed its second album, and Shores of Null, a Gothic/Doom band which have just released its debut album. Leonardo, our bass player, has recently joined a newborn Djent band called Alien Red.

Well, no one can tell, and that's the beautiful part of it! By making too much plans or having expectations things can come out contrived. For the present day, after finishing the parts for the album, there is slightly more attention in exploring electronical sounds rather than orchestral ones, but things may change quickly. It's just about being spontaneous and write the music that comes out from you.

In the latest years there has been one name above all: the Norwegian Avantgarde scene, so experimental bands like Arcturus, Winds, Borknagar, Solefald and so on. This musical scene has been a big influence on our approach, which met the other major reference, Progressive Metal.

12.What are some of your non musical interests?
Matteo: is writing music a non-musical interest? Hmm, maybe not. I guess the same would apply to playing guitar and collect and painstackingly listen to metal cds. So what's left? Eating fatty food, watch some movie at times, and above all making lots of dumb things with friends.
Leonardo: I enjoy passing my time in front of a computer screen and trying to make things work (rarely achieving this goal). In my spare time I work as a physicist.
Emiliano: Studying and teaching drums could be a non-musical interest? Ahahahah, ok seriously... i love reading and watching movies at the cinema whenever i can.
Gloria: I am a compulsive reader with a strong interest for videogames, crosswords and make-up artistry (although this strange mixture of hobbies apparently doesn’t make any sense).

We hope that you people can find some time and patience to listen to this album, and maybe also enjoy it. There is a very part of our souls in it.

Posted by OccultBlackMetal at 12:56 PM No comments: 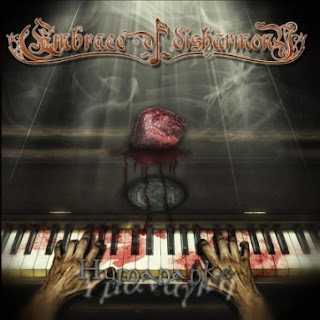 Embrace  Of  Disharmony  show  a  great  amount  of  originality  with  their  music,  having  a  sound  that  is  mostly  rooted  in  progressive  metal  while  also  having  the  heaviness  of  death  and  black  metal  as  well  as  mixing  in  a  lot  of  classical,  symphonic,  opera,  gothic  and  avant  garde  to  create  a  very  diverse  sounding  album,  the  production  is  very  professional  sounding  and  the  lyrics  cover  the  struggle  in  fate  or  circumstances,  identified  in  Ananke,  primordial  deity  in  Greek  mythology.

http://facebook.com/embraceofdisharmony
Posted by OccultBlackMetal at 3:07 PM No comments: