1.For those that have never heard of you before, can you tell us a little bit about the band?
We are a Pagan/Folk Metal band from Argentina. Our music goes from the rawest Black Metal; to the most Humpa Folk you can hear. We like to say that we are a hybrid of the genre, we don’t search to be or more blackers or more folker. We mix the thing to be delightful for everyone who likes both genres.

2.So far you have released one ep and one full length, how would you describe the musical sound that is presented on both of the recordings and also how do they differ from each other?

Our first release; The Awakening, was released on 2011, this EP could be described most like a Troll Metal album. Are 4 songs with lot of Humpa screeching rhythms guitars and accordions, and a really characteristic sharpie voices.
The album, Last Domain, is an evolution of all our music. The different kinds of rhythms and different folklores are noticed on this album. Making these release a huge evolution of the band.

3.The band has been around since 2009 but so far there has only been 2 releases, can you tell us a little bit more about the gap in between recordings?

The first album was recorded for the original members, Folter, Olek and Kryz. It was released for have some material and also the search of musicians to play this genre. The time lapses between The Awakening and Last Domain, 5 years, was because lot of members leaved the band, and was hard to have a regular formation. After many time, Folter, Kryz, Patrick and Olek recorded the album.

4.What are some of the lyrical topics and subjects you explore with your music?

In our lyrics we talk about Vorgrum world and how they want to prevent the advance of human race which want to destroy all the forest and nature from the World to build all they builds and etc. Vorgrum job is to prevent that.
We transmit a message of preserve nature and roots of each one, but this message is talked from the point of view of this creature. Which also likes to drink and dance in the forest till pass out.


5.What is the meaning and inspiration behind the name 'Vorgrum'?

To search a name for this particular creature, an ancient creature..

I (Iti) think that our best show was the show with Skiltron for the anniversary of “The Clans Have United”. The venue was full, and we player right before Skiltron, a lot of moshpits, sings of approval and a lot of fun, of course.
We describe our show as a party. We want to give people something else besides music. Is not only the execution of the instruments at the hour of give a show. You have to give something “extra” to the audience. We dance a lot, we have fun, and we make jokes to the public and between us. We think that if you want to hear only music, stay in your home and listen to the album, but if you want to have a lot of fun and drink with us, come to a show, and enjoy the party.

7.Do you have any touring or show plans for the future?
We’ll be touring around Europe on October.

8.On a worldwide level how has the feedback been to your music by fans of pagan and folk metal?

At worldwide level, we have a lot of feedback. People from lot of parts of the world write on our fb page, or Instagram. Most of the reviews of the album comes from European countries, and there a lot of bandcamps sells from different parts of the world.

We listen to all kinds of Metal, but we enjoy other types of music and we use them for Vorgrum, too.

11.How would you describe your views on paganism?

We in some kind are attracted to paganism. We don’t practice it. But we like the theme and we use it as philosophy of life, not belief. Of course, or songs had a lot of paganism and etc. But is not a concrete one, like Odinism, Wicca, or druidic. We use philosophies for all of them, and mix with magical creatures of folklores from Europe and rest of the world

12.What are some of your non musical interests?
That is a personal question. Respect me, I like to read a lot, videogames, and spend time with my dogs.
A group level, I have to said hang out for a beers or make asado (Argentinian Barbeque)

First of all, thanks for taking you time for sending this questions. We liked to answer them. Also, to all European Folks, we’ll be touring on October over Europe. So if you want to see a show, join us! We’ll be glad to know to every one of you, and meet new places.
Follow our tour at: https://www.facebook.com/vorgrum or https://www.instagram.com/vorgrumfolk
THANKS!
Posted by OccultBlackMetal at 5:24 PM No comments: 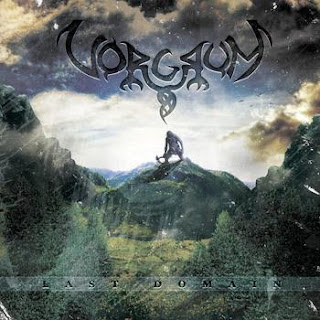 Vorgrum  plays  a  style  of  pagan/folk  metal  that  is  very  heavily  influenced  by  black  and  death  metal  while  also  having  its  melodic  and  symphonic  moments,  the  production  sounds  very  professional  while  the  lyrics  cover  high  fantasy,  trolls  and  drinking.

Posted by OccultBlackMetal at 2:44 PM No comments: