In Shadows And Dust Interview 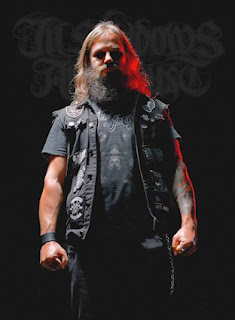 1.Can you give us an update on what has been going on with the musical project since the recording of the new album?
Since the end of te recording in mid-October I’ve been focus and gather material to promote the album and get everything ready for the release day. I also continue to records ideas for the next album and working on a Black Metal project with a French band from Paris.

2.You have a new album coming out towards the end of December, musically how does it differ from the stuff you have released in the past?
“Enlightened by Darkness” is lyrically more focused on the Darkness of my minds, life experiences and what I’ve been through/ On the music side, it’s less fast/grinded than the previous one, there are more mid paced moment but the aggressive sound still remains on each track.

3.Your music is very heavily rooted in the 90's era of Swedish black and death metal, do you feel you stand out as being different form the other bands and musical projects from your home country of France?
In. Fact I was playing this music in 97/98 with my previous bands Pelvic Bones and The Evil One, we had a HM-2 sound. When I started In Shadows and Dust back in 2014, I took my HM-2 and started riffing with it, this sound is how I love music. Its sounds indeed different from what’s happening in France on the Metal side, France is more Black Metal oriented (at least in the underground) but I don’t feel different as I just do what I want to do and not looking around to apply the French Black Metal code.

4.What are some of the lyrical topics and subjects you explore on the newer album?
As I mention a bit in a previous question, this is all about Darkness. Darkness of my own mind and my experiences in life. Everyone is going through shit in life and I am no exception, I just use my feeling and hell I’ve been through to build around with lyrics and music. I also use some external stories and past event as in Deathlike Silence (just by the name of the song you’ll guess what it’s about)

5.What is the meaning and inspiration behind the name 'In Shadows And Dust'?
“In Shadows and Dust” comes from Kataklysm song. Kataklysm are a band I really dig because they do music without compromise. They continue to play the music they love and they are true with themselves, that’s what I appreciate with this band.

6.Can you tell us a little bit more about the artwork that is presented on the new album?
The artwork is done by Manel-Song Ollé Chin (@woodcvtter_illustration) from Barcelona and drummer for “Expel the Grace” I found very cool his work around the HM-2 / Swedish Chainsaw design, I think it was a good fit for “In Shadows and Dust” HM-2 infused Metal. There are many details on the cover like a HM-2 grave designed and few other items around. I had a vision for this cover, I’ll describe it to Manel-Song and he did the work. He also did past and future t-shirt design for ISAD.

7.On the new album you recorded everything by yourself, are you still open to finding a full line up to play the songs live?
I do have friends willing to play with me live but I prefer to focus on writing new stuff for now. We already rehearsed few songs together and it’s pretty bad ass working with other people on “In Shadows and Dust” material. Live might happen, sooner or later.

8.On a worldwide level how has the reaction been to your music by fans of black and death metal?
It has been great and I’m always surprise when I send music on the other side of the world ! The first people that supported “In Shadows and Dust” are still here and lived the evolution of the music. More and more people are supporting the band by sending messages, sharing music or buying merchandising. I don’t know if they are Black Metal fans or Death Metal fans, what I know it’s the are Metal fans and appreciate the hard work and heart that I put in In Shadows and Dust music.

9.Where do you see yourself heading into as a musician in the future?
First there will be a next ISAD album out the 21st of December 2019, I already recorded stuff since October and I will continue to do so. I’m also working with another band as a singer / drummer on a very very dark Black Metal project, this will be raw and reminded me of the early Mayhem stuffs.

10.What are some of the bands or musical styles that have had an influence on your music and also what are you listening to nowadays?
Influences come from the late 90’ with bands like Entombed, Dismember, Necrophobic, Night in Gales, A Canorous Quintet, Ablaze my Sorrow and all the Swedish Death Metal wave.I listen to different favour of Metal and lately I’ve been into Obscenity, the re release of A Canorous Quintet, Unearth, Inert, Nightbearer, Organic and Revel the Flesh for example, but the list would be very long if I had to list everything.

11.What are some of your non musical interests?
Tits

12.Before we wrap up this interview, do you have any final words or thoughts?
Thank you for you support and spreading the work around, we are the Metal Underground https://redefiningdarknessrecords.bandcamp.com/album/in-shadows-and-dust-enlightened-by-darkness
Posted by OccultBlackMetal at 8:40 PM No comments: