1. Can you give us an update on what is going on with the band these days?
1. We are currently practicing our live set on a nearly daily basis. Our setlist includes songs from our first two albums in a different version. Meanwhile we have around an hour's listening experience to offer. We are also currently searching for a good booking agency (as well as management) who could book us many gigs. For the bass guitar the bassist from the predecessor album, the then 16-year-old Araisen, is responsible and the 23-year-old Mark Edwards from Birmingham is on the drums for our
gigs.

2.How would you describe the musical sound of the new album and also how does it differ from past albums?
2. In the third album we were able to connect together the first and second albums. Both the producer as well as our studio drummer Matze think that it is more "fluid" than its predecessor the Shore of Straying Souls (2003). Tears of Hate (2001) was not composed to the extent that we had planned due to our former drummer. Thus the album was "doomier".In addition, this time we took more care with the symphonic elements so that all instruments and the singing come into their own.

3.There was a 10 year gap between albums, can you tell us what was going on during that time?
3. In 2003 with our album The Shore of Straying Souls we signed a contract with Dark Music Productions (Portugal). However our album only came out in eastern and southern Europe. After a short while this company went into liquidation and our planned tour never took place. A year later Sorroth decided to take on the offer of his producer and move in with him in order to work on a couple of other musical projects. In these four years he composed the project Brandenburg, as well as the song Golden Machine (Silver Machine from Hawkwind) on one of the Perry Roden samplers that were distributed by Cargo etc... At the of 2007 Sorroth returned to Frankfurt am Main and decided with Samotha to compose a new album, which the record company Bellaphon was to release. After umpteen appointments and meetings it turned out after two years that they could not finance the production. Finally, we produced our albums ourselves in Empire Studios and in February 2011 signed with Schwarzdorn Productions.

4.What are some of the lyrical topics and subjects the new release explores?
4. In 2009 the singer Sorroth reached a low point and spent some time in the Frankfurter drug scene with his acoustic guitar, where he composed an unplugged version of the song Dying In The Corner. This song is dedicated to all the drug victims. Slur, Repayment For Committed Injustice as well as Betrayal Of Trust arose directly after Sorroth's return to Frankfurt am Main, because, alongside other reasons, there were constantly disputes with Carlos Peron (his then publisher) as to the music rights. The magazine Spiegel noted that Sorroth was being exploited. Majestic Uprising celebrates our patience and perseverance.
The strength that you feel increasingly through the dark times is there to give the listener hope. The highest form of hope is overcome despair. Seven Seasons describes the 4-year-long separation of Sorroth and Samotha through the false declarations of the so-called "creatures". Len Dopis (Just A Letter) is a "thankyou" for the tears and years of sorrow. If Sorroth had not supported me and I him, we would probably not exist anymore. Once we gathered ourselves we applied to a smaller distributerwith a pre-production (of four songs), where we were told that we should do something slightly more commercial, as it would fill the coffers. Afterwards we would then get a fitting label. Out of our defiance the
song Due Of Commercialisation emerged.

5.What is the meaning and inspiration behind the name Dark Man Shadow?
5. Already in the creation phase of the band in 1996 we asked the local fans for a fitting band name. First the name "Black Wine" was celebrated, yet as the frontman Sorroth is a very dark guy he was called Dark Man. His ambition, potential and his appearance put ​​everything in the shade for which he was also partly named Shadow. Perhaps in Englishit would be correct to write "Dark Man's Shadow", but this would carry a different meaning.

6.What are some of the best shows that the band has played over the years and also how would you describe your stage performance?
6. Until now we have enjoyed all gigs and with every appearance have collected new experiences as we do not utilise samplers or midis. This obviously also depends on the mixer who is responsible for the band. We have fond memories of the festival Rocktober in Paderborn, of the smaller gig in Salzgitter as well as the Nightmare Festival in Berlin. Even the open air festival Bretthart where we had no bassist and still received a very positive response. When we stand on the stage we insist on a good sound, as then we fall into a "trance" and can transfer this onto our audience. Oftentimes we bring the blood to the boil. We would be very pleased to deliver a show-spectacle this year.

7.DO you have any touring or show plans for the future?
7. As previously mentioned, we are currently in negotiations with management who could look for booking agencies for us. Unfortunatley nothing is certain as yet, but keep an eye on us as we are ready to perform at any time.

8.On a worldwide level how has the feedback been to the newer material by fans of black, gothic and death metal?
8. Fans from all over the world (both male or female, from 16-60) write us very positive feedback. Many were already very impatient about when the release would take place. As it is not yet released we cannot say very much about this so far; but at present most of the reviews have been very positive, about which we are very pleased. Nothing is worse for an artist, than to be destroyed by journalists in front of the whole world. We hope that the fans will like it both musically as well as the content. Our new album includes music for Death, Black and Gothic fans.

9.Are there any other musical projects going on these days?
9. We do not want to waste any more time on side-projects and want to firstly mainly concentrate on Dark Man Shadow, as it looks like there will be a lot of work coming our way. Apart from that, we have a few ideas we still want to work on.

10.What direction do you see your music heading into on future releases?
10. The direction will probably always remain the same, as the music is mainly composed by Sorroth and Samotha; the idea would be to add a few new elements and maybe to change the concept of the course of the music. At this point we do not want to give any precise comments.

11.What are some bands or musical styles that have influenced your newer music and alos what are you listening to nowadays?
11. Sorroth's idols for singing were Ian Gillan, Robert Plant, Dio,
Blacky Lawless and for guitar were Jimmy Page, Tony Iommi, Eddie van Halen and Kerry King. Samotha's prediliction for dark classical music complemented the idea, musically offering something for fans of every genre.Privately we do not listen to a metal radio station as it could influence our compositions.

12.Outside of music what are some of your interests?
12. To live our private lives, in whatever way, the main thing is it's fun.

13.Any final words or thoughts before we wrap up this interview?
13. Many thanks for your support through this interview. In addition, we hope that many new fans will be gained who don't just love the music, but also look inside themselves and think about how much further we will let inequality and injustice go on, instead of putting a stop to it.
Together we are strong.
Samotha

Posted by OccultBlackMetal at 3:10 PM No comments: 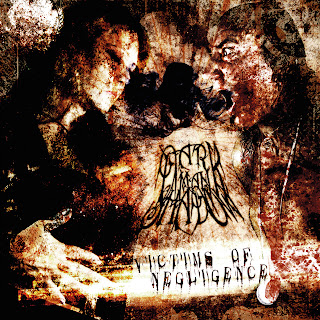 Song  lyrics  cover  dark,  depressive  and  poetic  themes,  while  the  production  has  a  very  strong,  powerful,  heavy  and  professional  sound  where  you  can  hear  all  of  the  musical  instruments  that  are  present  on  the  recording.

www.facebook.com/darkmanshadow
Posted by OccultBlackMetal at 11:40 PM No comments: