Can you give us an update on what is going on with the band these days?
Currently, our singer fulfils his army duties that are obligatory in Greece.  The rest of the band is constantly jamming and rehearsing in order to compose and create new material for future songs.

2. In April you had released a new album, how would you describe the musical sound that is presented on the recording and also how does it differ from the stuff you have released in the past?
Our previous release was an EP named “Fiend Incarnate” and was released in the band’s early stages.
In April we released our full length album named ‘’A Harrowing Atrocity’’. We think of this album as a leap from our previous work because it was exactly what we had in our minds about our sound; from the music to the lyrics, from its power, presence and length to its meaning and ability to make the listener travel via our music.
The sound cannot be easily defined or categorised and we are fine with that. We like to refer to our music as ‘majestic black metal’ as if it is a new genre that we can call our own.

3. This is your first release in 4 years, can you tell us a little bit more about what has been going on during that time span?
In Greece, where we live, there is only a small portion of the population that listens to metal or any kind of heavy music. These 4 years that passed since our last release we were on the hunt of Greek audience. We were constantly trying to book as many live gigs as possible and meet as many people as possible because we wanted to create a fan-base that could provide feedback about our work as we were working on it and because the contact with the audience is what feeds an artist’s mindset to keep up the work and channel the positivity and energy to our music compositions or lyrics.
‘A Harrowing Atrocity’ is an album that derived from what was given to us spiritually through our fans.


4. What are some of the lyrical topics and subjects the band explores with the newer music?
Main topic of the song writing are Greek Mythical characters unveiling their darkest sides through sinful tales or even imaginary entities that praise what’s dark and part of the occult and chaos. But if you let yourself think and dream, or even try to think yourself as if you were inside the stories, you can relieve past experiences  through a weird, distorted and dark feeling if you translate our lyrics’ metaphors.

5. What is the meaning and inspiration behind the name 'Dark Portrait'?
It was not an easy task to find a proper name for our Band.
We always had the vision of our music making the audience part of our lyrical stories; and we wanted to incorporate this vision to our band’s name. Our main goal was to let those who want to relate to our music create an imaginary picture of them that defines their image when being a part of our tales.
‘Dark Portrait’ is not our portrait. It is a portrait of one’s darkest and unexplored – or even unknown – self.

6. What are some of the best shows that the band has played over the years and also how would you describe your stage performance?
We joined many shows here in Greece. Metal stages and gigs are difficult to be booked and organized and we had to hunt them down. I guess our connections lead to the most renowned metal stages in Greece, opening a couple of huge names of the scene and that got us the experience needed to have a consistent stage performance.
When we are on stage, we all feel that we have the cue to bring our own Dark Portrait characters to perform. We appear as dead and weak corpses that have risen from their tombs but when the melody starts, one can feel the darkness that seems to drive us on stage.

7. Do you have any touring or show plans for the future?
We are currently working on our new album and trying to rehearse and jam as we wait for our singer to complete his army duties. When his duties are fulfilled, we have plans about touring Greece for the second part of 2017. After that, given that our second full length album is completed and released, we discuss about touring through Europe.

8. The new album is going to get re-issued on Xperiment XIII, can you tell us a little bit more about this label?
When we were in the hunt of a label to promote us, we contacted as many people as we could so that we could find what deal was the best for our band and our schedule. We found many of them wanting to sign us but we decided to sign with Xperiment XIII because we knew that Clive that runs it was a fan and supporter of our music and our band and because the deal was really close to what we had in mind.

9. On a worldwide level how has the feedback been to your music by fans of melodic and symphonic black metal?
Our music tends not to have a lot of things in common with melodic and symphonic black metal. It is an unorthodox approach to both of these genres. In our band’s early stages, we were contacting individuals from other countries via facebook in order to spread the word and gain followers from other countries and different cultures.
Feedback was our next priority.
In general, even people from countries as Finland or the Netherlands that are used to the heaviest and styles of black metal were constantly giving us positive feedback especially for ‘a harrowing atrocity’ album and after its completion we knew that this was the route that both we and the listeners loved.
People from all over the world are still curious about what we have going on

11. Where do you see the band heading into musically during the future?
Fast forward to the release of our second full length album. After that an after its promotion we will pull as many strings as possible in order to tour Europe to say the least.
Our band is all about interaction with the people, so, after providing the second album, we will try to perform on stage wherever there is an audience.

12. What are some of the bands or musical styles that have had an influence on your music and also what are you listening to nowadays?
These days, the bands that we tend to listen to the most are Carach Angren, Septic Flesh, Rotting Christ, Carpathian Forest, Cradle of Filth, Dark Funeral, Bathory, Watain, Dimmu Borgir and others.
Our influences are our inspiration and we try to create music that they could head bang to the way we do to their songs.

13. How would you describe your views on Occultism?
Occultism is all about what is there to find but the world tends to refuse its presence and functions. It is the rails that our lives roll on but no one will ever admit or accept it because darkness is an unknown place that only few want to discover or even be a part of.
For us, it is a part of one’s self that is definitive and infinite.
It influences us but we try to incorporate it to our music as less profoundly as possible and the reason for that is that we do not want to throw it into the listener’s face. We want him or her to prepare for its truth.

14. What are some of your non-musical interests?
We all enjoy having a beer or two listening to good music or hanging out discussing about our plans and views on the band.
Yeah, some of us have their own hobbies but most of our time goes into our every-day jobs and our band.

15. Before we wrap up this interview, do you have any final words or thoughts?
We want the world to know that we create the music that we would listen and head bang to. Our lyrics have many meanings and can be translated to feelings and thoughts that will give you the chance to live them.
Our music for us is not about getting famous or getting payed. It is all about touching hearts and inspires our point of view of the music’s darkness to the listener.
We would keep composing and creating even if no one listened but we are grateful that the world keeps being interested in us and supports us.
That’s the truest thing that drives us.

Posted by OccultBlackMetal at 4:58 AM No comments: 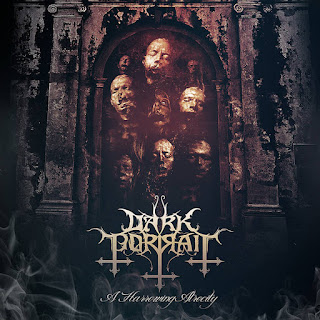 Dark  Portrait  plays  a  style  of  black  metal  that  is  very  symphonic  and  melodic  while  also  adding  in  touches  of  goth,  the  production  sounds  very  professional  while  the  lyrics  cover  Darkness  and  Occultism  themes.