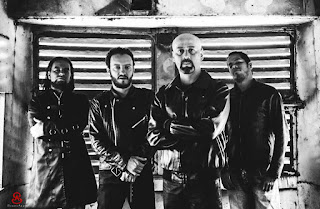 1.For those that have never heard of you before, can you tell us a little bit about the band?
1.Of course. Sinnerangel is a band from the city of Medellín, Colombia, which combines and mixes several genres of metal without established guidelines. Our denomination is the Dark Metal

2.In June you had released your first album, how would you describe the musical sound that is presented on the recording?
2.Our sound is the result of a decade of musical experimentation, we wanted to take the time to find the style that is finally reflected in the album. As we emphasized in the previous question, we never wanted to enter the studio with everything completely defined or established, and in a certain way it is what gives an identity to our music.

3.The band has been around since 2004 but waited until 2017 to release an album, can you tell us a little bit more about the first 13 years?
3.The band had an important activity at the local level for the first 5 years, at that time we did not have enough perseverance to continue with the project on the rise and each member ended up focusing on their personal projects. In 2014 we started the activities again and we started the project to what would be our debut album.

4.What are some of the lyrical topics and subjects the band explores with the music?
4.Our vocalist is the author of most of the lyrics, he takes a lot of theatrical literature and in that sense we consider that they are like short poems and writings that we try to preserve to give identity to the sense of obscurity.

5.What is the meaning and inspiration behind the name 'SinnerAngel'?
5.Sinnerangel is duality and contradiction to time. It is the profane and the sacred. In a way the name gives us a little bit to express the band's sense of not being on one side

6.What are some of the best shows that the band has played over the years and also how would you describe your stage performance?
6.In our first stage we shared the stage with important national bands of great trajectory like REINCARNATION AND NEUROSIS, I believe that these bands have international recognition, since both had at that moment more than 20 years of trajectory. Then came other minor concerts and in this new stage of the band we are preparing better with our performance, we hope to have our album launch soon with a concert that has better conditions on stage.

7.Do you have any touring or show plans for the future?
7.We are in talks with some bands and labels. But our priority for the moment is to launch the album nationally.


8.On a worldwide level how has the feedback been to your music by fans of black and death metal?
8.We receive weekly review reports on zines, websites and other media. It is encouraging to see how there are good comments on our music, keeping in mind that it is our debut. Currently there are many emerging bands worldwide and it is difficult to highlight in any way. But it's a long-term job.

9.Where do you see the band heading into musically during the future?
9.Definitely composing a new work, and advancing conversations to play at an international level.

10.What are some of the bands or musical styles that have had an influence on your music and also what are you listening to nowadays?
10.Each member has his tastes and therefore the band has this multiplicity of sounds, in general melodic death, black metal and much of the old school metal is always present in our most common tastes. Bands like Hipocrisy, old man childs and at the gates, are influences of our first stage

11.Does Occultism play any role in your music?
11.I would say that more than an occult theme we are talking about the decadent human gods, the need for approval to continue living and the constant fear of death.

12.What are some of your non musical interests?
12.Hahaha, well, no one is a mystery that few metal bands can dedicate entirely to music. We all have alternative life projects, and our areas of work are architecture, photography, couching and things like that.

13.Before we wrap up this interview, do you have any final words or thoughts?
13.A huge thank you to Qabar Extreme Music and our GRIMM DISTRIBUTION labels for the support and diffusion in this time. To all the readers I recommend to visit our channel and fan page, to acquire our album and to be attentive to the innovations that we can bring in a future! Long live the metal from Colombia!

Posted by OccultBlackMetal at 6:19 PM No comments: 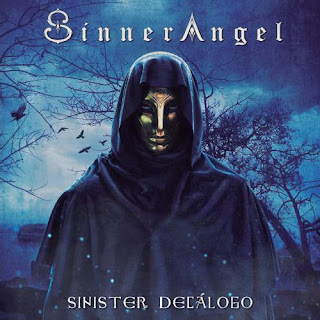 A  very  epic  sounding  intro  starts  off  the  album  bringing  in  the  atmosphere  of  a  fantasy  movie  along  with  some  symphonic  elements  and  after  the  intro  the  music  goes  into  a  heavier  direction  along  with  a  great  amount  of  melodic  riffing  and  after  awhile  black  metal  screams  are  added  onto  the  recording.

SinnerAngel  plays  a  musical  style  that  takes  black  metal  and  mixes  it  in  with  the  melody  of  melodic  death  and  power  metal  to  create  a  sound  of  their  own,  the  production  sounds  very  professional  while  the  lyrics  cover  the  sinister  side  of  human  existence.