1. Can you give us an update on what has been going on with the band since the recording and release of the new album?

Answer: We’re currently focusing on playing gigs to promote Catharsis, but we also started writing some songs for an upcoming concept album.
2.Recently you have released a new album, how would you describe the musical sound that is presented on the recording?

Answer: If we had to find a definition, it would be a mixture of melodic death and thrash metal linked with progressive elements in terms of song length and structure. But we’re not really friends of that whole subgenre thing so we prefer to just call it metal :)
3.What are some of the lyrical topics and subjects the band explores with the newer music?

Answer: The lyrical concept of five of the songs can be described as “don’t be fooled by yourself, believe in your skills, and don’t let anyone tell you what or have to do”. Songs like “Shadowmaker” tell the story of war from the viewpoint of an atomic bomb, “Emperor” is a homage to Charlie Chaplin’s speech in “The Great Dictator”, “For The World To See” deals with bullying and the worst of all outcomes, a killing spree and “To The Streets” is for all the people around the globe who risk their lives to spread the idea of equality, freedom of speech or democracy.

4.What is the meaning and inspiration behind the name 'Mandatory'?

Answer: We stumbled upon the word by accident and we just thought it sounded cool. After looking up the actual meaning we can say it’s quite well chosen: “MANDATORY is mandatory listening”! :)
5.What are some of the best shows that the band has played over the years and also how would you describe your stage performance?

Answer: Our performance is mostly built on having fun on the stage and delivering an energetic show. We always try to get that vibe across to the audience. The shows which are most fun for us to play are definitely at our yearly self-organized events called MANDAFEST,  although we have to admit that our STAR TREK gig at the open-air Maifest 2011 in Vienna’s Prater is also a candidate for the 1st place.
6.Do you have any touring or show plans for the new album?

Answer: We are currently booking shows to promote the album, but there are no concrete dates yet.
7.The new album was self released, are you open to working with another label again in the future?

Answer: Yeah, we’d be open to work with another label again because on one hand self-releasing an album is nice ‘cause we can set all the deadlines for ourselves and set plans according to our job schedule but on the other hand it is quite a workload to handle.
8.On a worldwide level how has the feedback been to the newer music by fans of extreme metal?

Answer: The feedback has been real good so far and we hope that it will even get better.

Answer: Our next plan is to work on a concept EP or Album, depending on the writing process, but musically it’ll be quite in the same Melodic Death/ Thrash métier we’re in now. Maybe the songs will get a bit more complex. We’re also trying to work with a label again that supports what we do and that can help us reach more people with our Music.
10.What are some of the bands or musical styles that have had an influence on your newer music and also what are you listening to nowadays?

Answer: Our early influences where bands like Children Of Bodom, In Flames, Metallica, Testament and a bit of Dream Theater but also more recent artists like Opeth, Darkane, Soilwork, Scar Symmetry and so on.
But  there’s so much music going on in our lives from metal to folk over classical music to jazz that ist’s quite hard to tell what influenced us on this album. We’d say all of it! :)

Answer: Some of our interests are sports, workout, design, video production, electronics, coding, family and playing computergames - just random things dudes do in their freetime. :)
12.Before we wrap up this interview, do you have any final words or thoughts?

Answer: First of all thanks for the interview and as mentioned above, dont forget: “MANDATORY is mandatory listening”!


Posted by OccultBlackMetal at 6:14 AM No comments: 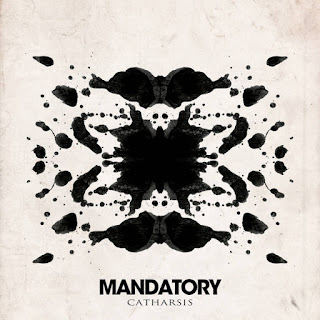 A  very  modern  sounding  and  melodic  thrash  metal  sound  starts  off  the  album  along  with  some  aggressive  vocals  bordering  on  death  metal  and  after  a  couple  of  minutes  spoken  word  parts  are  added  into  certain  sections  of  the  recording  along  with  some  guitar  solos  and  leads  that  display  a  very  melodic  and  old  school  style  of  metal  being  added  into  the  bands  modern  approach  to  metal.

After  awhile  the  music  starts  adding  in  more  melodic  elements  of  Swedish  black  and  death  metal  along  with  all  of  the  musical  instruments  having  a  very  powerful  sound  to  them  along  with clean  singing  vocals  being  mixed  in  with  the  more  extreme  parts  at  times  and  on  some  of  the  later  tracks  the  band  starts  utilizing  more  blast  beats  along  with  a  small  amount  of  clean  playing  and  after  awhile  more  progressive  metal  influences  and  a  small  amount  of  synths  become  a  part  of  the  album.