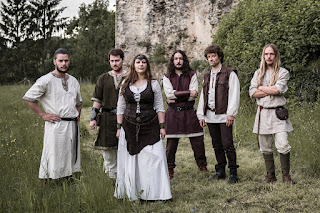 In fact, the new album was recorded quite long ago now, but we had to face the departure of our two guitar players, Sylvère and Tristan. It took a moment to find our new musicians, but now we are complete again and our guitarists Alex and Kael are ready to play all our songs, old and new !

2.In 2019, you have a new album coming out, musically how does it differ from the stuff you have released in the past?

This new album is a mix of all that the members of the band have brought : it is louder in the drums parts, with hints to pagan metal, but also closer to traditional folk, with acoustic parts and the use of flutes in addition to the violin in two songs.

3.This is going to be your first release since 2012, can you tell us a little bit more about what has been going on during that time span?

Thanks to our previous album, we had the opportunity to play in many different places and festivals, so we tried to meet new fans and audiences in France and also in Belgium and Switzerland for example. We also took time to work on new songs again and again, in order to be sure they were exactly what we wanted.

4.The new recording is a concept album based on the King Arthur Legends, can you tell us us which stories you brought from these legends into the music?

Most of the new songs refer to the stories about Arthur himself : how he was hidden by Merlin as a child (A red sun rises), how he grew up and discovered his sword Excalibur (The son of Pendragon), how he married Guinevere (Camelot) and met Lancelot for the first time (La dame du lac), how he was killed by his son in battle (Mordred)... But we also created songs about other characters of the legends : Perceval, Gawain, Morgan.

5.I know that the bands name came from 'Norse Mythology', can you tell us a little bit more about your interest in Paganism?

This interest comes firstly from our interest for history of the Middle Ages (that was my major at university) and from our love for mythology and old legends. We are into all kinds of legends (Celtic, Norse, Scottish...) but what is really fascinating in Norse Mythology and Paganism is that in fact we know very little about it, because these people did not write books, and stories about it were written later, with a different point of view. So it remains very mysterious !

This artwork, created by talented Edouard Noisette, alludes to the story of the Fisher king : Perceval meets the old man who takes him in a boat to his castle where he will see the Grail, but will not dare to ask anything about this marvellous object.

I think our best shows are often festival ones, when we discover a new audience that did not know us before, for example at Cidre&Dragon in Normandy. But shows in small pubs, close to the fans, are also  really enjoyable ! On stage we wear medieval fantasy outfits and try to take the audience with us on a journey in old legends, with energy or melancholy, depending on the songs.

The shows are being prepared right now so we cannot announce a tour yet, but it will come soon ! And we are still looking for shows to complete the tour.

9.The new album is self released, would the band be interested in working with another label again in the future?

We are open to any proposal of a label, but it depends on the conditions !

10.On a worldwide level how has the reaction been to your music by fans of folk metal?

We were really surprised to discover that people loved our music as far as in Japan or South America. As a matter of fact, there are not so many folk metal fans in France. Of course, fans of screamed vocals only may not enjoy our music that much, but we can move a rather large range of metalheads !

Our new guitar players will bring something new by writing some of the new songs. But we also want to keep our personal sound and atmosphere.

We have influences of bands such as Ensiferum or Amon Amarth for the music, but my singing has been more inspired by folk singers such as Loreena MacKennitt or bands like Faun. And the violin is more influenced by Irish trad fiddle. Personally I listen nowadays to varied styles of music, and I enjoy metal opera projects such as Ayreon.

13.What are some of your non musical interests? I practice medieval and folk dances, and medieval historical reenactment. I also read a lot of Heroic fantasy novels.

14.Before we wrap up this interview, do you have any final words or thoughts? Thanks for your questions, it is always a pleasure to expose our universe and explain our music !

Posted by OccultBlackMetal at 5:11 PM No comments: 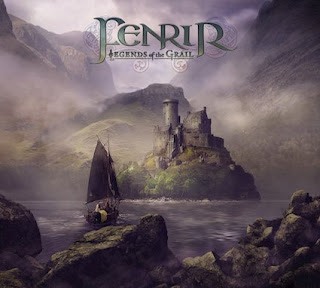 https://www.facebook.com/FenrirOfficialFR/
Posted by OccultBlackMetal at 1:05 PM No comments: