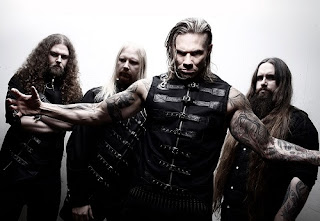 1. Can you give us an update on what is going on with the band these days?
Zorn: Right now we are preparing for our first show at Motocultor Festival in France on the 18th of August and we have just started the promotion cycle for our debut album “Where Hatred Dwells and Darkness Reigns”. There is also some work left to do on our graphic novel that will be released as the comic book edition of the album, so yeah… we are staying busy to say the least!2. You have an album coming out in September, how would you describe the musical sound that is presented on the guitar?
Zorn: To begin with we have normal tuning on our guitars. Sverker Widgren (owner of Wing Studios where we recorded) created such a thick and heavy sound for our guitars so there was no need to tune them down. Personally, I feel that if you tune down a guitar it doesn’t really add anything in heaviness if the riffs themselves aren’t heavy already. We also have Deathbucker pickups from Lace pickups that helped us get a perfect mix of new and old with the tone as well. Even though we are a “Symphonic” band, the guitar takes up a lot of space on the album. The guitar is the strong stallion that’s pulling the carriage of the orchestra and the choir.3. The main person in the band has previous experience in other bands, what is it that you feel that you are able to do different with this band that you were not able to do in previous groups?
Zorn: This band I built from scratch. When the foundation for the band was built I was lucky and found great people that shared the same vision. I think a difference with this band is that we are looking more outside of the box, we have pretty much smashed the box and rebuilt that whole idea. There is so much focused creativity pulling in the same direction. It makes the music and the ideas around the concept very powerful and more focused than I have ever experienced before.4. The lyrics on the album have a concept to them, can you tell us a little bit more about the songwriting?
Zorn: The story takes place at an asylum called Zornheim - Where Hatred Dwells and Darkness Reigns, and each song tells the story of ones of the inmates that is imprisoned there. The physical version of the album also includes each inmates’ medical record written by the head doctor Dr. Bettelheim.

Regarding the songwriting, I started mostly with writing the guitar riffs, even though with “The Opposed” I wrote the cello theme on an old keyboard with a cello sound. Then I recorded and arranged the songs in my home studio. I met up with Angst and did drum arrangements with him in the rehearsal room and later he recorded the drums. Once I got the rehearsal drums from him I did small adjustments with the guitars and the orchestra as well. When Bendler joined the band, me and him started working on the vocals together, sending ideas back and forth and then Scucca came with some vocal input before we recorded it with Sverker Widgren at Wing Studios. Once the foundation of the songs were done I sent over the orchestral score to Scucca and he arranged the ideas so that they would work and then wrote it down as notation for the string orchestra and the choir. Since each song contains over 300 channels on the album, the songwriting process was more complicated than just meet up a few guys and jam in a rehearsal room.

5. What is the meaning and inspiration behind the name 'Zornheym'?Zorn: Zornheym was my stage name when I was in Dark Funeral. The former German lead singer of Dark Funeral, Nachtgarm, came up with it. It is german and it means “home of anger”. The more I started to hear people calling me that, the more I liked the sound of it and when I started to plan to form this band I found myself with a concept that pretty much tells a story about a “home of anger”. So simply using that name felt natural. The story takes place in Germany so we decided to name the asylum “Zornheim” and the band “Zornheym” and I decided to shorten my name to Zorn, because that’s what people usually called me anyway.

6. What are some of the best shows that the band has played so far and also how would you describe your stage performance?Zorn: That’s a really hard question to answers since we have not played any shows so far, haha… Our debut show is on the 18th of August in France on the Motocultor Festival. We are playing together with bands like Bloodbath, Opeth and Candlemass, in other words we are super psyched and honoured for having this opportunity for our debut show!
7. Do you have any touring or show plans once the album is released?
Zorn: Besides Motocultor, nothing is booked yet. However plans are slowly taking form. The best thing you can do if you want to see Zornheym play in your city is to contact your local promoters and make sure that they understand that there is a demand for Zornheym in your area.8. On a worldwide level how has the feedback been to your music by fans of extreme metal?
Zorn: We have only released two digital singles and our first show is on a 20.000+ festival, I can not believe how extremely well people have greeted us. Thank you!
I think that it is really hard to break through the white noise surrounding music today. I’m getting the feeling that our extremely thought through concept is helping us with that though, but only time will tell. So far, so good!
9.What is going on with some of the other bands or musical projects these days that some of the band members are a part of?
Zorn: My other band/studio project, Aktiv Dödshjälp, might enter the studio later this year. I have almost all the songs done and I have a recording line up as well. I hope we can do it because the songs are really cool. I know that Bendler has just added a ton of great songs onto Spotify recently, and him and Facebreaker are slowly putting a new album together. Angst’s Diabolical are recording pre-productions for their next album. Scucca’s other band, Encrowned, has some killer songs in production for their debut too.10.Where do you see the band heading into musically during the future?
Zorn: I see us diving deeper into the concept that we started with “Where Hatred Dwells and Darkness Reigns” and using more and more real instruments. Our music can basically travel where the concept takes us since we are a band driven by our concept. I look forward to creating more epic symphonic compositions though!
11.What are some of the bands or musical styles that have had an influence on your music and also what are you listening to nowadays?
Zorn: To begin with what have influenced me while writing this album I would say these albums:
Dissection - Storm of the Light’s bane
Dimmu Borgir - Spiritual Black Dimensions
King Diamond - Voodoo
Blind Guardian - Nightfall in Middle-earth
Yngwie Malmsteen - Seventh Sign
Emperor - Anthems To The Welkin At Dusk
Hans Zimmer - Inception soundtrack

I don’t think we sound like any of these bands or artists exactly, but they have been a great inspiration for me while writing. When I’m listening to music at home, I only listen to the albums in my record collection, and then I would rather put on an album and let it play through. When I’m out I stream music via Spotify and then I more look for music or check out new albums. Recently I have been listening to the new Carach Angren album, Blaze new album, Bloodbath, Edge of Sanity and the new Rhapsody of Fire album. Sometimes I go into instrumental periods and just listen to soundtracks or classical music. Other times I am at the gym and just getting psyched up by Raised Fist.

12.What are some of your non musical interests?
Zorn: I like going to the movies and TV series. I also often find myself stuck watching different documentaries about historic events. I like to read a lot as well. Most of my time when I’m not working with music is invested in my 3 year old son and my girlfriend though.13.Before we wrap up this interview, do you have any final words or thoughts?
Zorn: Thank you for your interest in Zornheym and thanks to you who took the time to check out the whole interview. Please check out our debut album “Where Hatred Dwells and Darkness Reigns”. If concept albums are your poison, dive into our concept and explore, it is a new angle on the approach to concept albums and I think you will like it! Check out our singles on youtube and if you want to help a hard working band, get the physical version of the album. Either way, thanks for taking the time to check us out. See you on the road!

Posted by OccultBlackMetal at 8:28 AM No comments: 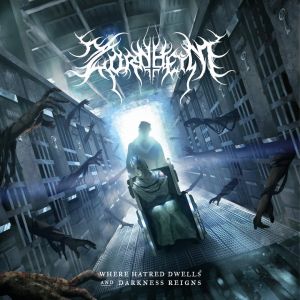 Zornheym  plays  a  musical  style  that  is  mostly  rooted  in symphonic  black  meta  while  also  mixing  in  some  influences  from  other  genres to  stand  out  a  bit  more,  the  production  sounds  very  professional  while  the  lyrics  cover  short  graphic  stories.


Posted by OccultBlackMetal at 11:02 AM No comments: