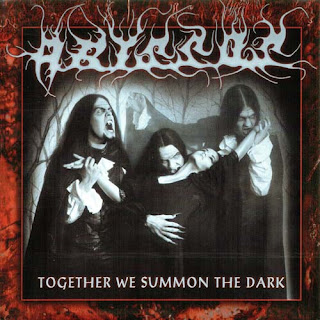 Abyssos where a band from Sweden that played melodic black metal and this is a review of their classic debut album "Together We Summon The Dark" which was released by Cacophonous Records during the year of 1997.

Drums are very fast with a lot of brutal blast beats and they slow down at times when the music goes into a more slower/heavier and melodic direction, while the bass playing has a very powerful sound with a lot of fast riffing that sounds very professional, as for the keyboards when they are used they enhance the atmosphere of the music..

Rhythm guitars are a mixture of slow, mid paced to fast black metal riffs that are very heavy and melodic, while the lead guitars are mostly melodic guitar solos that mix black and melodic death metal together.

Vocals are high pitched black metal screams mixed in with a little bit of clean singing female vocals, while the lyrics cover topics such as witch burning, vampirism, and dark witchcraft from a left hand path as well as satanic point of view as well as a small amount of anti Christianity, as for the production on this recording which was recorded at Academy Studios during the month of May in the year of 1997 sounds very professional and you can hear all of the musical instruments that are present on this album.

In my opinion Abyssos where a very talented band that was very underrated for their time and if you are a fan of melodic black metal you should check out this band. RECOMMENDED TRACKS INCLUDE "We Hail Thy Entrance" "Lord Of The Sombre Reborn" "In Fear They Left The World Unseen" and "I've Watched The Moon Grow Old". RECOMMENDED BUY.

https://www.metal-archives.com/bands/Abyssos/1454
Posted by OccultBlackMetal at 7:26 PM No comments: