Marco - Guitar: We formed back in 2009 as Folkentroll, the initial sound was a Folk Metal similar to Finntroll and Korpiklaani, bands we used to enjoy at that time. Afterwards the name has changed in “Macaria”, that in the apulian folklore means “curse sent by a witch or a person associated with evil entities.”
Our musical style is Folk Death Metal with a strong symphonic component, growl vocals and clean choirs. We try to mix ideas from different musical styles, often unusual in the metal purpose.
The band was born due to our passion for folk metal, but during years it is evolved with ourselves.


2.Recently you have released an album, how would you describe the musical sound that is presented on the recording?

Marco - Guitar: There are a lot of different styles in the album, the main components are folk, symphonic and death metal, but you can also find clean choirs, progressive riffs and unusual influences like swing. Despite this, we looked for a personal and recognizable sound that we like to define “grotesque”.

Marco - Guitar: The lyrics are based on a story written by myself. It is an allegorical criticism of the society and it talks about a puppet coming to life in the middle of the theatrical act it was used for. Suddenly all the strings it was tied to tear off and, from a situation of slavery and unconsciousness, the puppet is tossed in the absolute freedom. All that will influence its perception of the world it sees.
The various song lyrics explore his point of view about topics like the education that is imposed on us, religion, the condition of middle class workers and politics that divide us.


4.Originally the band was known as 'Folkentroll', what was the cause of the name change and also the meaning and inspiration behind the name 'Macaria'?

Davide - Guitar: The name change was caused by a will of detachment from the folk metal scene of that period, to build, without any constriction, a more personal sound and something more artistically satisfying. We chose the name “Macaria” because it has a particular meaning in our region (in our dialect it means “witchcraft”, “spell”, “sorcery”), but in the meantime it doesn't suggest a musical genre, as instead “Folkentroll” did.

Davide - Guitar: As Macaria we played some cool shows in Italy: Rivarolo Music Camp, Beerstruction and Spongstock VIII are examples. In our stage performances we focus on the execution and the audience entertainment. We do like to stage our album, wearing steampunk clothes, giving a theatrical taste to everything.

Davide - Guitar: We’re working on it. Now we’re starting to plan events in Apulia and probably we'll have some shows in other parts of Italy. Maybe we could have chances to be part of some mini tour abroad.

7.On a worldwide level how has the feedback been to your music by fans of folk and death metal?

Davide - Guitar: We had some nice reviews from different websites and we had a particular interest from the Latin America zone. A reviewer wrote this about our album: “You don’t have to listen to the album twice to like it. You do have to listen five times to come to love it”. We do appreciate it and we hope that our future listeners will think the same. Our style is not a classic folk metal, so we have two points here: people that expects us to be similar to other famous artists will be a little disappointed, instead the ones that are looking for something different and unconventional will meet their match.

Marco - Guitar: Actually only Luca (our drummer) is involved in Dreker, a thrash metal band. In the past years almost all of us were involved in other projects, I played guitar in a black/death band until the last year, but unfortunately it did not go ahead.
Me, Federico (keyboards) and Davide (guitar) often collaborate with a classical music teacher that needs support for her events.

Marco - Guitar: So often our tendency is to experience new sounds, so we will continue on this path, but we also have to wait for the audience’s feedback on the current album, in order to know how moving for the future. If the style of the concept album that we proposed will seem to work, maybe there will be another concept.

Davide - Guitar: Our major influences are Finntroll, Kalmah, Devin Townsend and Wintersun. Anyway these four names are only the tip of the iceberg, because every member listens to different musical styles even so far from metal, smoothing the sound of the band. Nowadays I personally listen to David Bowie, Gorillaz, Destrage, Opeth, Tears for Fears, Pendulum and more.

Marco - Guitar: We listen to a lot of different musical styles, everyone in the band has different influences and we try to use this variety as an advantage for the band. I currently jump from a genre to another, day by day, and I listen to Strapping Young Lad, Wintersun, Pantera, Igorrr, Decapitated, The Dear Hunter, Infected Mushroom, Those Poor Bastards and many others.

Davide - Guitar: We have different interests apart from music. I like coding and creating software; Lorenzo uses to improve himself in his hobbies like woodworking, iron working, welding, mechanics and land cultivation; Luca De Marco loves reading books and playing video games; Luca Casto usually plays five-a-side football, reading comics or watching cooking programs on tv (even if he knows nothing about it); Federico considers music his own real hobby, indeed.

Marco - Guitar: The main interests, common to all members of the band, are food and beer. Tons of pasta were consumed during the creation of this album.
Other interests are watching movies and tv series, going to the gym, practicing martial arts.

Davide - Guitar: We'd like to thank you for the opportunity and the chance of this interview and the readers for their attention. If you want, you can support the band following us on Facebook (

Posted by OccultBlackMetal at 5:09 AM No comments: 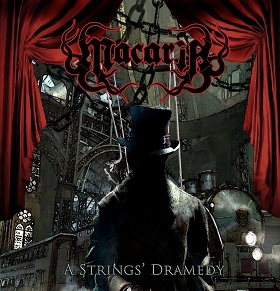 Macaria  plays  a  musical  style  that  takes  folk,  symphonic,  pagan  and  death  metal  and  mixes  them  together  to  create  a  sound  of  their  own,  the  production  sounds  very  professional  while  the  lyrics  cover  dark  themes.

Band's Facebook
Posted by OccultBlackMetal at 8:56 PM No comments: