1.For those that have never heard of you before, can you tell us a little bit about the musical project?
I started playing guitar about five and a half years ago (I was 16) . After I got better at the instrument, I started composing and recording simple songs and riffs at home (mostly rock and heavy metal) just for the fun of it. I live in a small village and starting a band was not possible. Then, in early 2012, a dear friend told me to listen to a black metal band called Taake. I had never listened to that genre of music before and its sound and imagery captivated me. That started it all. In no time, I learned about dozens of bands and genres of black metal and experimented with that sound. At about mid-summer 2012, nearly half of what would be my first album was already made.

2.In September of 2013 you had released your first album, how would you describe the musical sound that is presented on the recording?
"Dark Moonlight Forest" was kind of an experiment sound wise. It has a whole lot of elements from different styles of metal. I knew I wanted it to be melodic but raw at the same time, with slow-paced clean guitars but also fast fast heavy ones. You could call that mash up of sounds melodic black metal, ambient black/death metal, etc. I like to call it Kablo-metal.

3.What are some of the concepts and images you bring out with your musical sound?
Nature in general but especially forests. My family comes from a northern zone of Spain called Galicia, very well known for its beautiful landscapes. I've always enjoyed long walks in the forests, trying to connect with nature. That's what I would like to evoke.

4.All of the music recorded so far has been instrumental, are you planning on using vocals in the future?
I am indeed! I wasn't able to put vocals in the first record because my singing is not very pleasant, but some people have offered their voice to sing for future songs.

5.What is the meaning and inspiration behind the name 'Kablo'?
It's actually really dumb and funny. Years ago, my group of friends used to call me "Calvo" (wich means bald in Spanish) because I was the only one with very short hair. One day, one person extremely misspelled the word and wrote it like "Kablo" and everyone found it hilarious. It has been my pseudonym since that very day.

6.You record everything by yourself, are you open to working with other musicians or do you chose to remain solo?
I haven't had the opportunity to play in a band yet but I would like to someday. That being said, I don't think I would completely give up my solo project even while playing in a different band.

7.Currently you are unsigned, are you looking for a label or have received any interest?
Not at the moment. Music is still only a hobby for me. I genuinely love to produce songs by myself.

8.On a worldwide level how has the feedback been to your music by fans of black and death metal?
The album was actually very well received; a lot better than I expected considering my low experience producing music. The amount of downloads it had on bandcamp was quite high and the reviews generally good.

9.Are you involved with any other musical projects?
No. "Kablo" is my only project by now.

10.Where do you see your self heading into musically during the future?
I don't really see myself getting super serious with my musical project. I do it for fun and it helps me disconnect from my daily life. I hope to be able to keep making music and explore new genres for a lot of time, having the same amount of fun as I do now.

11.What are some of the bands or musical styles that have had an influence on your music and also what are you listening to nowadays?
Basically black metal bands like Taake, Burzum, Dissection, Emperor... but my music has been influenced by styles that go from crust-punk to death metal, and even post-rock.
Nowadays, I listen to almost everything that isn't extremely commercial or mainstream. I like lots of types of metal, rock, punk and some electronic music. I'm also a big fan of video game music.
12.What are some of your non musical interests?

I really love exploring new places and walking through forests and mountains is one of my favorite pastimes. I also enjoy basketball and video games a lot.

13.Before we wrap up this interview, do you have any final words or thoughts?
Well, I would like to thank darkdoomgrinddeath.blogspot.com for taking the time to interview me and for the great review of my album. Also all of my gratitude to the people that support me all over the internet. Expect some new material in the near future!

Bandcamp
Posted by OccultBlackMetal at 7:23 AM No comments: 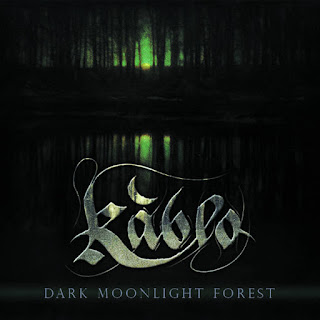 Kablo  creates  a  very  interesting  sound  with  his  instrumental  approach  to  melodic  black/death  metal  as  well  as  adding  in  elements  of  ambient  music  to  make  his  music  sound  more  original  and  the  production  sounds  very  powerful  for  being  a  self  released  recording.

Posted by OccultBlackMetal at 1:34 PM No comments: