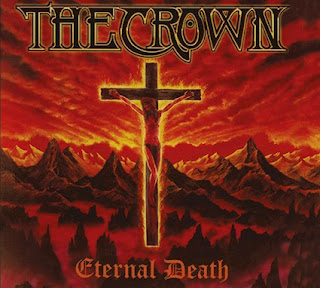 On  this  recording  The  Crown  remained  true  to  their  melodic  mixture  of  black,  death  and  thrash  metal,  the  production  sounds  very  professional  while  the  lyrics  cover  death,  darkness,  Satanism  and  anti  religion  themes.

Posted by OccultBlackMetal at 7:18 PM No comments: 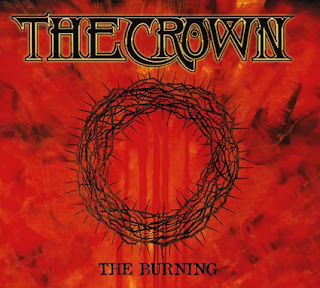 Posted by OccultBlackMetal at 5:53 PM No comments: 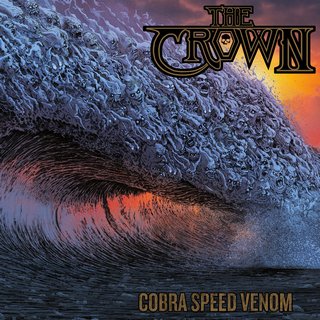 Since the recording of the album we have taken a small well-deserved rest. After more than a years intensive work in the rehearsal and studio. Also we need the time to do promotion and interviews and read all the raving reviews! The album is not released yet. It will be released 16th of march and we will celebrate this date with 2 simultanious releaseparties, one in Sweden and one in Germany. We are also planning and booking the live dates for 2018.

It’s a new album, new songs, new drummer.  I think it is more or less the same style we have been doing since Hell Is Here (98). That means a mix of different Metal elements with some punk and rock attitude. I feel we have more energy on this new album. We have done the Hard work in the rehearsal room. So it is a real band effort which I think you can hear on the final product.

3.Since 2010 there has only been 3 full lengths, can you tell us a little bit more about the gaps in between recordings?

Well there has been a lot of problems with line up which now is settled. We now have a stable and strong line up that I hope will last for a long time.

4.The band was broken up for 3 years, what was the cause of the split and also the decision to reform?

Well we started when we were 14 year old kids. After 14 years we felt that we needed to take time off and take care of personal business that had been left out. For me it was having children and getting a proper education. Because this Death Metal stuff is great but it does not put food on the table. After having taken care of that the need grow again to get back in the saddle. We have been doing this for so long that it is a Very important and integrated part of our lives.

5.When the band reformed they where known as 'Dobermann' briefly before reverting back to your older name, can you tell us a little bit more about this decision?

The Dobermann was a band project with me and Whiplasher from Deathstars that never happened. Most of the material I wrote for that ended up in another form on the Doomsday King album after I approached the other guys to be part of it again.

We have done many shows that I have found memories of f ex. Wacken , Tokyo, Gothenburg, Los Angeles. The stage performance is straight up full on. Nothing fancy. Just great music and hopefully a lot of energy. We were brought up with old Metallica and the thrash bands so we keep it real.

Yep there are some shows already booked, UK first up. More shows will be booked so keep your eyes open If you want to join in!

8.This is the first album you have released on 'Metal Blade Records' since 2004, can you tell us a little bit more about returning back to this label after all of these years?

9.On a worldwide level how has the feedback been to the newer music by fans of extreme metal?

The reviews on the up-coming album have been tremendous. Can’t wait to release it to our loyal fans!

We have put most of that aside to focus on The Crown. It’s just Henrik that does live drums for Soils of Fate now and then.

I think we have found a nice formula with lots of variety and different flavouring that we should keep doing. I think it is important that the music is honest. That you do the music you want to hear yourself. Try to Keep the passion up!  Otherwise it turns stale and boring, trying to fit into the cookie-cutter formats.

I have my musical roots in the thrash, Death, grind and black scene of the 80/90ies. Bands that have influenced me on this new album is Anti Cimex, Venom, Black Sabbath, Deströyer 666, Hellhammer etc.

13.How would you describe your views on Satanism?

We have Never had the image of being some Dark High priests or grand masters of the occult arts. That is not for us. We play Metal. That’s it. Satanism is a tricky subject. Everyone seems to have their own definition. I am interested in mythology, metaphysics and religion. It is interesting to see that when religion and the Church abolished Hell and The devil, these more terrible aspects of the divine turned up in Metal. I am not a satanist. I am a traditionalist you can say. I believe that satan is, in a way, an aspect of the divine and an important piece of the whole.

I work and I have a family. I also like reading and liftning weights.

15.Before we wrap up this interview do you have any final words or thoughts?

Thanks for the interview! Check out Cobra Speed Venom If you want to get jackhammer to the brain! 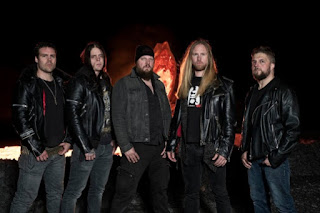 The  Crown  creates  another  recording  that  remains  true  to  their  melodic  mixture  of  black,  death  and  thrash  metal,  the  production  sounds  very  professional  while  the  lyrics  cover  apocalyptic  themes.

Posted by OccultBlackMetal at 2:53 PM No comments: