1.For those that have never heard of you before, can you tell us a little bit about the musical project?
Internal Chronicles started out as a black/doom project by my friend (and now ex-band mate) Antares and me (NoOne) in 2011. We were really into metal and wanted to write and record our own music, but it was hard to find other musicians who wanted to play this genre so we did everything ourselves. Unfortunately, we didn't have the money nor the knowledge to record a full album back then, so the whole project was put on a hold until 2017. when we finally managed to get all the recording equipment.

2.In 2019 you have a new album coming out, musically how does it differ from your previous material?
The first album (Out of Sanity's Reach) was pretty raw and slow-paced. The second album, called Crimson Storm,  coming out in January 2019.Is a little more fast-paced, more melodic (more leads, orchestrations, piano and viola parts) and the quality is better.

3.What are some of the lyrical topics and subjects you have exploredwith the duo?
Out of Sanity's Reach is dealing with the topic of alienation and estrangement that both of us felt at that time (and still feel to some degree). We both always felt that somehow we are different than most
people, so the album explores some aspects of this kind of life-style (which includes being angry and disappointed with the world, but also the problem of loosing people, whether through death or through abandonment).

4.The musical project has been around since 2011 but waited until 2018 to release any music, can you tell us a little it more about the earlier years?
We wrote the first album (guitars and lyrics) in 2011. But couldn't find anyone to play bass and drums nor did we have the money to record the whole thing, so out of frustration and lack of motivation the
whole project was paused. But then, in 2017. I met a friend of ours who was selling his drum kit so he sold the kit to us for cheap (thanks Baco!) and another guy that I knew was selling his bass
guitar. Finally we decided to just buy the recording equipment and do it all ourselves and in 2018. Out of Sanity's Reach saw the light of day.

5.What is the meaning and inspiration behind the name 'Internal Chronicles'?
Each album is (and will be) dealing with a certain topic, a certain central emotional state that I'm in at the time. In a sense it is a musical diary of my emotional life. I'm using music as "track record"
of everything that is happening to me, as sort of a chronicle. That is internal... You get it. I'm also using it as a catharsis so that once this emotions are recorded I can psychologically move one. It is a
selfish pursuit I must confess.

6.Can you tell us a little bit more about the artwork that is presented on the new album cover?
The new album is called Crimson Storm, so the artwork is literally that - a storm, that is crimson in color. It is a metaphor for love, so the album deals with all the good, the bad, and the ugly sides of
love, but ends on a positive note. It is dedicated to my one and only. It's not a popular theme in black metal, but it is what I feel so I'm not going to make any compromises just to stay "kvlt". Also, I'm
pretty sure all those angry black metallers also felt love at some point in their life haha.

7.The band started out as a duo but is now a solo project, do you feel it is a lot more easier to get things done better musically this way?
Well, since Antares quit because of lack of motivation and time constraints it is easier. I don't have to wait around for a day when he has the time and motivation to write so I get a lot more done on my
own. On the other hand, I have the final say now so it's hard to stay objective sometimes. Also his creative input was different from mine and that worked great. Because of that he still remains a session member and we still write together sometimes.

8.You also keep your identity a secret, do you feel it is a lot more important to let the music do the talking?
That is exactly right. I felt it didn't matter who I was or what I look like in real life (hence the name "NoOne"), so I created this persona that I use to push my music forward. I really don't care about
looks, live shows, what guitar I'm playing etc. The only thing that matters is the music. It must be true and have a purpose. Everything else is irrelevant.

9.The new album was released on 'Guts And Blood Records', can you tell us a little bit more about this label?
Guts and Blood is a small label form South America that releases extreme metal genres. They actually found me and asked if they could release the second album as a Compact Disk. So far, they have been great. They did all the marketing and set the whole thing up for the release while respecting my wishes and my creative freedom.

10.On a worldwide level how has the reaction been to your music by fans of black and doom metal?
It was great. A lot of sites noticed me and I did a few interviews already. The fanbase is steadily growing. I'm satisfied since I didn't expect anyone to even listen to this shit, let alone like it.

11.Where do you see yourself heading into as a musician in the future?
I want to continue recording albums (the third album is in the planning stage right now) and working with different artists. On Crimson Storm I managed to bring in Sonia who is a professional viola
player (who also played the piano and other orchestrations), a friend of mine (Djere)  who did a great guitar solo, and Klara who did some speaking vocals and who also did both artworks for both albums. On the third album I'll be working with all of them, but I'm also bringing in a female vocalist (I hope) and a professional violin player (If everything goes as planned).

12.What are some of the bands or musical styles that have had an influence on your music and also what are you listening to nowadays?
Nowadays I'm listening to almost everything. Most metal genres, jazz, rap, classical music etc. I'm searching for motivation everywhere, but the bands that influenced Internal Chronicles the most are Draconian, My Dying Bride, Dark Tranquility, Wintersun and the Norwegian black metal scene from the 90's. It's a weird mix now that I think about it.

13.Before we wrap up this interview, do you have any final words or thoughts?.
Thanks for the interview and stay tuned for the Crimson Storm in January 2019. And a lot more from Internal Chronicles because I'm just getting started. Cheers!
Cheers

Posted by OccultBlackMetal at 5:48 PM No comments: 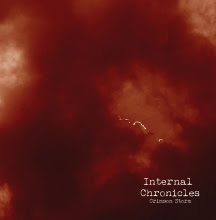 Grim  black  metal  screams  start  off  the  album  before  going  into  a  heavier  doom  metal  direction  which  also  introduces  melodic  guitar  leads  onto  the  recording  while  the  riffs  also  bring  in  a  great  amount  of  melody  along  with  most  of  the  tracks  being  long  and  epic  in  length  and  synths  are  also  used  briefly.

Internal  Chronicles  plays  a  musical  style  that  takes  melodic  black  and  doom  metal  and  mixes  them  together  to  create  a  sound  of  his  own,  the  production  sounds  very  professional  while  the  lyrics  cover  dark  themes.

https://www.youtube.com/watch?v=L9UjzrqFZIk
Posted by OccultBlackMetal at 7:30 PM No comments: