We're getting ready to go out for a 2 month run with Antagonist, Wretched, and Diskreet that starts august 26th. We're also demoing some new material as we're constantly writing.

To breathe is to live, to fill yourself with the most vital element of survival.

Florida and Texas always have awesome crowds, they are probably our favorite places to play. Our stage performance is bloody,intense, ethereal.

5. Do you have any plans to tour Europe in the future?

We always have plans to tour Europe, little things just prevent us from going. Hopefully we'll be over there early this winter

6. How has the support been from Candlelight Records so far?

It's been pretty cool, the know a lot about the business and utilize their resources well.

7. How would you describe the lyrical content of the music?

We've always strive to stay away from the cliche metal topics (some big war, Armageddon, god hating) and try to talk about things on a more poetic and meaningful level. Our current album is about the human psyche in all of it's wonder and despair.

8. How has the reception been to the newer material from symphonic black metal and brutal death metal fans worldwide?

When we wrote the "poppier" songs on this album we were kinda nervous as to how people would take it given that our last album was much heavier. But everyone seems to love Odyssey, which made us very happy that people approached it with an open mind and didn't ridicule us for not being all breakdowns anymore.

9. How would you describe your musical progress over the years and what direction do you see the music heading into on future releases?

I think that we constantly try to reinvent ourselves so that people don't really know what to expect. We just kinda write what comes out and it always seems to be different than the last. The newer stuff we're gonna experiment with some more electronics and some more clean singing which is something we've always wanted to do but have been limited in it until now. We all listen to a lot of different music to draw influence from and for me that kind of changes with each release. So i guess we'll see what comes out next time.

10.Does Occultism, Satanism or Paganism play any role in the music?

We all come from very different religious backgrounds, none of which play a direct role in our music, we do however use religious themes metaphorically to describe different things. Odyssey while being about emotion is also about the environment and nature, which some might label "paganism" but you don't have to be a pagan to love,respect and fear the earth.

11. What are some of your interests outside of music?

We are all pretty avid gamers. Most of us play lots and lots of video games haha.

12. Any final words or thoughts?
Buy our album, come checkout our upcoming tour (dates are @ www.myspace.com/tbp) Bathe in Blood........TBP
Posted by OccultBlackMetal at 8:24 PM No comments: 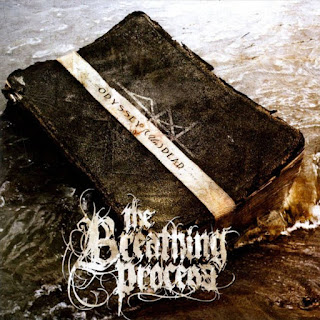 The Breathing Process are a band from the U.S with members from Connecticut and Massachusetts that mix symphonic black metal with blackened death metal and this is a review of their 2010 album "Odyssey(Un)Dead which was released as a joint effort between Siege Of Amida and Candlelight Records.

Drums range from being slow, mid paced and technical with a lot of fast playing and brutal blast beats being used, while the keyboards are very atmospheric and symphonic with some industrial elements, as for the bass playing it has a dark tone that follows the riffs that are coming out of the guitars.

Rhythm guitars are a mixture of black metal and death metal riffing with a good mix of slow and fast riffs that contain a lot of melody, while the lead guitars are very technical and melodic guitar solos that utilize a lot of skill.

Vocals are a mixture of high pitched black metal screams and deep death metal growls with some clean singing male and female vocals being thrown in at times, while the lyrics cover exile with a darkened touch, as for the production it is very professional sounding with all of the instruments having a good sound.

In my opinion The Breathing Process are a very good band and while some elements of their music might be to commercial sounding for my ears at times, this is still a talented band, fans of symphonic black metal and blackened death metal should enjoy this album. RECOMMENDED TRACKS INCLUDE "Grimoire" "Vultures" and "Decaying(Form)". RECOMMENDED BUY.

Posted by OccultBlackMetal at 6:59 PM No comments: