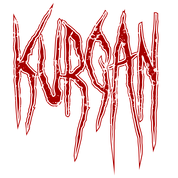 Well we're KURGAN from Denmark. We do melodic death metal in general, but it varies all the way from black metal style to classic heavy metal style.
We're basically just doing stuff we feel like. There's a lot of different influences throughout the band which makes the end result a good blend.


2.The first full length comes out during the end of September, musically how does it differ from the demo you had released in 2016?

Musically it only differs in natural evolvement which is rooted in time. I mean we as composers and musicians is always on a journey so to speak. We're the same guys doing what we do.
The full length release features the same 4 songs from the demo - rerecorded of course. And then 6 additional songs written afterwards - mostly. I feel that the full length contains the full variety off who we are as musicians


3.Some of your lyrics deal with 'Nordic Mythology', can you tell us a little bit more about your interest in this topic?

I guess it's in the blood, being vikings:) But its just a damn cool mythology really. The archetypes in it is just something everyone can relate to I believe.
Some of us grew up with the myths, stories and legends of the mythology, so its deeply rooted really. However we don't limit ourselves to a certain theme


4.What are some of the other lyrical topics and subjects you have explored with your music so far?

There's a zombie track about the powers and horror of that apocalyptic universe, called EVIL DEAD.
Also HELLSTORM revolves around the end of all things, chaos and destruction and we've even got a cold and chilling love story
on the album entitled FUR LISE.


5.I know that the band name is a loan word from East Slavic Languages, how does this name fit in with the musical style you play?

Well it means a barrow/burial mound. The vikings sailed along the rivers all the way deep into Russia so there's the viking link to the name.
And although it doesn't have any reference towards the highlander villain, he was right; there can be only one KURGAN:)

YGGDRASIL BURNS was the very first track written for the band. Or before it was even a full band. And it's a strong title.
So we wanted an illustration of the tree of life YGGDRASIL in flames. Dragan helped us out with that.

All of our shows are great:) but the local ones has been the funniest I think. We did a local festival in Asnæs and also a local celebration of metal in general in Holbæk.
We even got a self-made local show coming up in Nykøbing Sj. which our drummer Charlie has made possible - we're really looking forward to that.
Stage performance description would be 'honest' I guess. We just do what we do - having a good time, rocking out and enjoying the moment.
We don't use any theatrical tricks or do anything 'for the sake of it' - we don't pose - posers can leave the hall:)


8.Do you have any touring or show plans once the new album is released?

WE're working on that - so far we do the shows that makes sense for us.

9.On a worldwide level how has the reaction been to your music by fans of extreme and melodic metal?

Great. I mean we didn't anticipate the level of recognition we've gotten on the release.
Its clear from the streaming nowadays that our music is appreciated all over the lands:)

Again, we do what we do. Evolution will takes us wherever we need to go. We're metal guys doing melodic stuff - that's the core of it


11.What are some of the bands or musical styles that have had an influence on your music and also what are you listening to nowadays?

There's a lot of different styles, being 5 guys. I mean Metallica, Death, Amon Amarth, In Flames, Immortal and Manowar, is something that most of us enjoy I believe.
And therefore inspiration strikes. In regards of what we listen to, I can only speak for myself which currently revolves around Opeth, King and Unleashed

Thanks for the interest - stay metal! 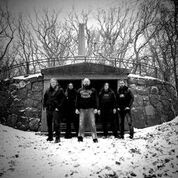 Posted by OccultBlackMetal at 11:38 AM No comments: Thunderstorm  sounds  start  off  the  album  along  with  some  classical  guitars  a  few  seconds  later  before  introducing  melodic  guitar  leads  onto  the  recording.  The  riffs  also  add  in  a  great  amount  of  melody  while  the  vocals  also  add  in  a  mixture  of  death  metal  growls  and  black  metal  screams.

Kurgan  plays  a  musical  style  that  takes  the  melodic forms  of  viking,   black  and  death  metal  and  mixes  them  together  to  create  a  sound  of  their  own.The  production  sounds  very  professional  while  the  lyrics  cover  Death,  Norse  Mythology,  Battles,  Blood,  Gore  and  Medieval  character  themes.

Posted by OccultBlackMetal at 1:20 AM No comments: