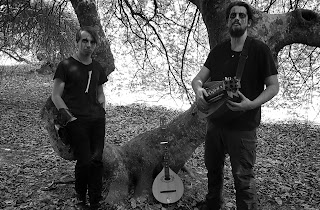 1.For those that have never heard of you before, can you tell us a little bit about the band? Twisted Mist is the result of a musical project in which we compose morceau mixing a rather brutal and primitive metal tainted with medieval sounds. Our music can be perceived as pagan or folk metal. We try to relate a tale through concept albums, which are mostly made of instrumental songs. Traditional instruments, such as the hurdy gurdy, the bombarde or certain types of flutes are featured in our albums. Our next album, Orbios, will be released in November and deals with legacy.

2.In November you have a new album coming out in November, musically how does it differ from the stuff you have released in the past? Musically, Orbios is quite different from our old stuff. With "Mortui Vivos Docent" and "Le brâme", our goal was to offer a travel throughout the album, halfway between traditional song and death metal. Even if it’s the goal behind Orbios too, the travel isn’t the same here. We wanted something more spiritual, with a large panel of feelings and tried to highlight this during the writing and composition process. However, in Orbios, we needed to emphasize the topic of the legacy, therefore we decided to sing in languages such as Latin or old French.

3.Your earlier music was instrumental while the newer music has vocals, what was the decision behind going into this direction? In our previous albums, we wanted to create an atmosphere, more than relating a tale. On this new album, it’s totally different. If it’s still important for us to make people travel through our album, we wanted above all a narration, a message behind the concept.

4.A lot of your lyrics cover Paganism themes, can you tell us a little bit more about your interest in this topic? We are fond of the Middle-Ages, Pagan legends and the History of Music more globally. It was pretty obvious for us to incorporate some pagan stuff during the writing process. That’s why Orbios is an album which deals with spiritual legacy. This topic means a lot to us so that’s why we wanted to allude to it and even present it throughout our lyrics.

5.What is the meaning and inspiration behind the name 'Twisted Mind'? Actually, we wanted to create a “misty” or “tortuous” aspect to the path taken by Twisted Mist and its compositions. We venture to music in which we experiment, thanks to a substantial collection of traditional instruments. We explore new things and we think that this name is a representation of what we create. It is not constantly the same, we don’t follow a straight path, from time to time it’s brutal, joyful, melancholic, and often spiritual… We also like to think of it as branches of a tree. We can also add that there is a forest in Verzy, near our city, Reims, in which we can gaze at Faux, trees which are naturally tortuous. So this was also an allusion to these trees, that we can also find in the logo of the band...

6.Can you tell us a little bit more about the artwork that is presented on this album cover? There are a lot of aspects to take into account. First, the colour. We chose to use mainly the red and it is scattered by black spots. On the one hand red represents life, energy and most importantly blood, the first true legacy of a parent to their child even before birth. Black, on the other hand, represents death, void and is an addition to the duality dealt with in Orbios. The hand symbolizes a mark. A mark is a visual and tangible track of somebody's passing. It corresponds to the theme of our album. Finally, there's a circle which surrounds the handprint in the centre of the sleeve and which is like the representation of the album: cyclic and without beginning or end, just like an Ouroboros

7.Has the band done any live shows or open to the idea? Considering the number of instruments played and the fact that we are a pair, even if we’ve played live on our own in the past, it’s difficult to think about a live performance for the moment because of some logistical reasons. Of course the COVID context doesn't really help us. Anyway, we’re not opposed to this idea, but we’ll need more time to think about it and more musicians to help us play all these instruments during a show.

8.The new album is coming out on Music-Records, how did you get in contact with this label? We were looking for a label that could understand the way we decided to take on Orbios and the work behind this concept album. We wanted to work with people who are passionate and ready to support our music. We were lucky enough to hear about Music-Records. We were able to talk about our album and they perfectly understood our approach.

9.On a worldwide level how has the reaction been to your music by fans of pagan and folk metal? It is too soon to really know and tell. We’ve already had good feedback on our previous compositions and they are also really positive for the first single of “Orbios”. Some listeners tell us that they “travel thanks to our music”, it is obviously heart-warming for us.

10.Where do you see the band heading into musically during the future? To be honest, we still have some difficulties imagining things that far. For the moment, we want to support, promote Orbios and share our music as much as we can. We are beginning to think about the successor of Orbios.

11.What are some of the bands or musical styles that have had an influence on your music and also what are you listening to nowadays? We often listen to traditional medieval music. We particularly enjoy some of the performances of Guillaume de Machaut’s morceau. We are interested by traditional formation such as “Les derniers Trouvères” or the Belarusian band “Stary Olsa”. We also admire bands such as Danheim or Wardruna. We really are fond of metal music: we can listen to Iron Maiden, Hypno5e, Gojira, Meshuggah, Grorrr, Sepultura, Avatar, Eluveitie, etc.

12.Before we wrap up this interview, do you have any final words or thoughts?  We would like to thank you for showing interest in our project and also thank the label Music-Record for putting their trust and helping us promote our creations ! 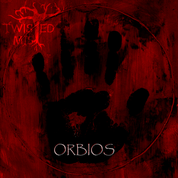 Twisted  Mist  plays  a  musical  style  that  takes  folk  music  and  melodic  pagan  black  metal  and  mixes  them  together  to  create  a  sound  of  their  own.  The  production  sounds  very  professional  while  the lyrics  are  written  in  French  and  cover  Paganism  themes.

Posted by OccultBlackMetal at 7:12 PM No comments: