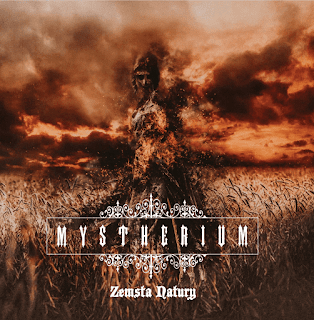 Posted by OccultBlackMetal at 9:29 PM No comments:

Hello, everyone!
Mystherium was formed in 2001 and our newest - 5th album was released in  July 2018. It’s been a very long way  with many different members, who made Mystherium what it is now. I believe, that thanks to the fact, that the lineup remains unchanged since 2011,  “Zagłada” is very mature and is our best recorded release. The reception was pretty good, we’ve received plenty of positive feedback, which gave us energy and motivation to start working on our new material.

2.Recently you have released a new album, what are some of the things you feel you have done differently musically on this recording that you where not able to do on your previous releases?

We’ve entrusted Maciej Rybicki from LSS studio Poznan with mixing and mastering the recordings and it was a really good decision, he did a great job.
.

3.What are some of the lyrical topics and subjects the band explores with the new release and also how would you describe your progress as songwriters over the years?

Miro wrote the lyrics from the very beginning and Aleksandra was the coauthor for the two newest releases - thanks to her, the lyrics are now related to paganism, the bonds between people and nature, transience of life and the self-destructive human nature. They are also referring to Polish history and poetry.

4.Some of your lyrics have covered some Occult and Slavic Paganism topics, can you tell us a little bit more about your interest in both of those areas?

All of the band members are interested in the history of the land we live in. We are reminding our listeners, that people who lived in these territories before they were called Poland, had their own rites and traditions.

5.In the beginning the band had some songs written in English, but the last few releases all of the songs have been written in your native tongue, can you tell us a little bit more about going into this direction?

Cooperation with Aleksandra and Darek gave that possibility, the previous vocalists preferred to sing in English. Polish language is more difficult to scream or growl, but allows for more adequate depiction of our feelings and ideas.

6.What is the meaning and inspiration behind the name 'Mystherium'?

Our name comes from the latin word “Mysterium”. The band was named after the title of the song from our first album “Uczta demonów”.

We are and have been cooperating with a few pagan/black metal bands (Arkona, Graveland, Taran, Horns, Moontower, Warfist....), so we can closely observe, how Polish black metal scene is developing. We have our own ideas and style. It was way more radical in the past. Nowadays bands are being formed and cease to exist, and only the strongest  ones remain.


8.Can you tell us a little bit more about the artwork that is presented on the new album cover?

It represents the destruction of nature and old beliefs induced by humans and our self-destructive nature. It was created by Maciej Zaborowski from MZproPAGANda and it’s my  fifth cooperation with him (Graveland/Nokturnal Mortum split, Horns-CZERŃ, MYSTHERIUM-Memoriał Nowy Świt, MYSTHERIUM -Zwycięstwo). We are really proud that he agreed to create the artwork for our band.


9.What are some of the best shows that the band has played over the years and also how would you describe your stage performance?

We’ve played different concerts both on various festivals and small club concerts some time ago, but we’ve been focusing on recording albums for the previous few years.

10.Do you have any touring or show plans for the new album?

11.According to the Metal Archives page the band is signed to 'Art of The Night Productions', how would you compare working with this label to the other ones you have been a part of?

The previous labels - Lower Silesian Stronghold, Eastside Records, HeidenWut Productions and Werewolf Promotions did a great job in selling our CDs, tapes and vinyls all around the world. Art of The Night Productions was responsible for our newest album - “Zagłada” and placing our previous releases on different internet platforms like Spotify or Deezer.

12.On a worldwide level how has the reaction been to your newer music by fans of black metal?

The reception was pretty good, we’ve received plenty of positive feedback. We’re very pleased to know that people from all around the world are sharing our music.

13.What is going on with some of the other bands or musical projects these days that some of the band members are a part of?

14.Where do you see the band heading into musically during the future?

We want to grow and get more recognisable. We are considering adding hurdy-gurdy.


15.What are some of the bands or musical styles that have had an influence on your newer music and also what are you listening to nowadays?


16.Before we wrap up this interview, do you have any final words or thoughts?

Support underground metal bands - thanks to your support we can release new material and play concerts. Sława!

Posted by OccultBlackMetal at 4:51 PM No comments: 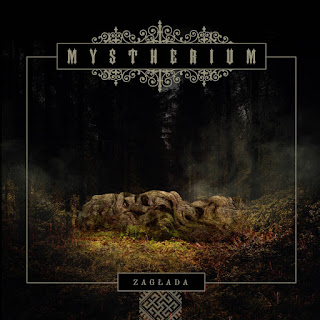 Spoken  word  parts,  stringed  instruments  and  keyboards  start  off  the  album  before  going  into  a  heavier  direction  which  also  introduces  clean  vocals  onto  the  recording  while  grim  black  metal  screams  are  also  quite  a  bit  throughout  the  album  and  the  music  is  heavily  rooted  in  the  90's.

Mystherium  plays  a  style  of  gothic  black  metal  that  is  very  heavily  rooted  in  the  90's,  the  production  sounds  very  old  school  while  the  lyrics  are  written  in  Polish  and  cover  anti  Christianity,  Patriotism  and  Polish  history  themes.