A Different Shade of Black Metal Interview with Erik Molnar from Hyperion
For those that have never heard of you before, can you tell us a little bit about the band?
Molnar: Musically, I would say that Hyperion is a band inspired by many different genres within metal and even to some extent by other styles of music as well. The main focus, however has always been to create a forceful, epic and melodic musical landscape over flooded with emotion. Our aim is to create music that is explosive, grandiose and beautiful at the same time.

Recently you recorded a full length album, how would you describe the musical sound that you wish to present on the recording?
Molnar: From a song writing point of view, that aim has already been explained in the answer to your previous question. From a production point of view, however I would say that we obviously wanted the sound to reflect and bring forth the full potential of each and every song. Our music is quite complex in the sense that we tend to have layer upon layer of guitar harmonies, orchestrations at times, complex bass lines and so on, so we wanted every instrument to be heard as much as possible without sacrificing the original atmosphere. We also did not want the album over produced like many modern metal releases, nor did we want something like say the first Bathory album (even though that album is fantastic). We wanted something in between and still have something unique. Epic I suppose is the keyword to the sound we wanted and I believe our mixing/mastering guy Sverker pulled it off.

Originally the band was a melodic death metal band but have started adding in over the years, what was the decision behind going into this musical direction?
Molnar: I guess you must be referring to the change we made with the release of the “Blood of the Ancients” demo back in 2010? Well, when we started the band we were quite young. I was 17 at the time and you naturally mature as a musician and include new sources of inspiration as time passes. I started listening to a lot of 90s Black and Death Metal and as a youngster that was incredibly inspiring for me to hear. It was wild, brutal, dark, and sinister but many of the bands still had a very melodic and melancholic touch to their music, which I felt very attracted to. Inevitably, I wanted to include these elements in my own music and my bandmates shared my enthusiasm. It was a step forward in our evolution process.

From 2010 to 2015, there was no new music released. Can you tell us a little bit more about what was going on during that time period?
Molnar: There were a lot of things going on during that particular period. We were writing a lot of material for the album that has now been completed, we played a lot of live shows, we made some small steps forward here and there, but nothing of great significance really happened, so we decided it was time to record our first full length album in the beginning of 2013. It took us almost 3 years to complete, the reason for that being mainly because we faced numerous obstacles along the way. As a band, we basically could not agree on anything at certain points and got into a lot of arguments about everything involving the recording process. I dealt with a lot of personal issues and the stress around the recording sessions made it all even more frustrating and harder to deal with, since all of us kind of lost motivation for a while. There were a million other reasons for the delay, but the tides eventually turned for the better. We now finally have the album ready for release. We are now only waiting for the printing of the album to be completed and then it can be spread across the globe!

Your lyrics cover some Occult topics. Can you tell us a little bit more about your interest in Occultism?
Molnar: We have some minor references to the occult in our lyrics yes, but it is by no means a central theme for the lyrics of Hyperion. It is impossible to play this kind of music without at least touching upon the subject, I suppose…
I used to be quite interested in the occult some time ago and still am to a certain degree. Although it is nothing I practice in my everyday life and I don’t subscribe to any particular religion. Some parts of it resonates with me, other parts are completely illogical in my understanding of it. I do strongly believe however that there are unseen forces beyond humanity’s comprehension that challenge the norm of “conventional thinking”. In short, Hyperion is not a religious band and we don’t support any kind of occult organisation, or activity as a band.

What is the meaning and inspiration behind the name 'Hyperion'?
Molnar: Hyperion was one of the great Titans of ancient Greek mythology. He was the titan of the sun before the Olympian Gods overthrew him fellow deities. The name reflects our music perfectly: It is ancient and it is epic. Some of our lyrics deal with tales from Greek Mythology, so that obviously fits in perfectly as well.

What are some of the best shows that the band has played over the years and also how would you describe your stage performance?
Molnar: There are 2 shows in particular that come to my mind at this very moment. The first one is when we performed at Snövit, a small pub in Stockholm in 2013. The place was packed, the sound was crap, but the atmosphere was fantastic. I believe there were about 70-80 people there that night, which is a lot by Hyperion standards and we were the “headlining act”. The crowd was great and we simply had a fantastic time. The second show was back in 2014 when we opened for my cousins band “Descend”. They has just released their new album. That gig was amazing and I have a lot of fine memories from that gig as well. It was magical.
Our live performances are pretty standard metal shows, I believe. We let the music speak for itself, headbang as much as we possibly can without fucking up our playing and we have a good time. I personally try to immerse myself as much as I possibly in the music. I care little for social norms, or what is considered “correct” when I’m on stage.

Do you have any touring or show plans for the new album?
Molnar: Yes, we have. We have avoiding playing live to often during the last time, since we believe that we must have something new to promote other than our old demo from 2010. There are a lot of things boiling in the cauldron you could say, but nothing booked quite yet. Time shall tell about that, but we definitely want to promote the new album and gig as much as possible when the album is released.
On a worldwide level how has the feedback been to your music by fans of melodic black and death metal?
Molnar: From those that have heard our music, the response has been great as far as I know. We have not gotten out of our way to promote our music that much to be honest since the release of our demo, but things are about to be adjusted… Our new single “Novus Ordo Seclorum” received quite a lot of airplay on metal podcasts around the globe and a lot of people have heard it on YouTube, I believe. The feedback seems to be positive so far and of course it would be nice if it continued that way when our album comes out. It is not that crucial to us, however if people appreciate our music or not. The important thing is that we do what we love and if people like it, it is certainly an immense bonus.

Where do you see the band heading into musically during the future?
Molnar: We actually have quite a lot of written material lying around. Not much has been completed yet, but I find the direction it is taking quite alluring, although it is far too early to speculate regarding that topic. Time will tell as we eventually complete the writing process for the next record.
What are some of the bands or musical styles that have had an influence on your music and also what are you listening to nowadays?
Molnar: Oh, there is a lot of stuff that inspires us. Undoubtedly there have been many Black/Death Metal and of course Melodic Death Metal bands that have influenced us, especially from the 90s. Some of the major would be: Dissection, Emperor, Marduk, Ulver, In Flames (their old material), Dark Tranquillity and At the Gates. We are also inspired by some Power and Heavy Metal acts such as Blind Guardian and Iron Maiden. Other genres tend to seep into our music as well, like classical music, gaming soundtracks, movie soundtracks… anything that catches our ears basically. We are experiment and mix influences as we see fit.
At the moment I am listening to a lot of Wintersun, some songs from Old Man’s Child and some good old Ensiferum, but I’m always on the hunt for new music to listen to.
What are some of your non-musical interests?
Molnar: I am quite interested in health, wellbeing and nutrition in particular. I like to take care of myself as much as I possibly can by eating right, getting enough of sleep, exercising as often as I can etc. Currently, I am also studying to become a system software developer, so programming and IT in general plays a significant role in my life. Other than that, I enjoy spending time with my loved ones, having an occasional drink and playing Starcraft II.

Before we wrap up this interview, do you have any final words or thoughts?
Molnar: From the bottom of my heart, I would like to thank each and every individual that has supported us thus far. Hyperion is growing slowly, but surely day by day and it feels terrific. I encourage anyone reading this interview to listen to our latest single “Novus Ordo Seclorum” and pick up the album when it comes out! Thank you for showing interest in Hyperion!

Posted by OccultBlackMetal at 4:54 PM No comments: 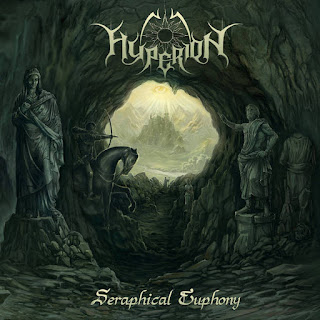 Classical  guitar  playing  starts  off  the  album  and  after  a  few  seconds  the  music  gets  more  heavy  and  melodic  along  with  some  atmospheric  synths  which  also  gives  the  music  more  of  an  epic  feeling  and  after  the  intro  melodic  guitar  leads,  blast  beats  and  high  pitched  black  metal  screams  make t heir  presence  known  on  the  recording.

Hyperion  plays  a  musical  style  that  mixes  the  melodic  sides  of  black  and  death  metal  together  to  create  some  very  dark  and  heavy  sounding  music,  the  production  sounds  very  powerful  while  the  lyrics  cover  Occultism  and  Legends.

Posted by OccultBlackMetal at 5:31 PM No comments: