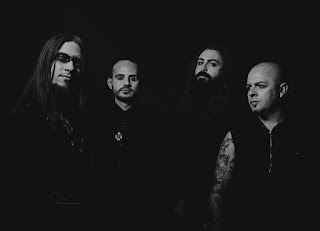 After album’s recording we started to search a new label for Elements’ Blackest Legacy .
We produced previously album Demiurge Of Shadow on nipponic Hidden Marly Prod / Zero Dimensional Records that was good for old album but now we needed for an european label . Sent promo album to a lot of labels but dutch Non Serviam Records answered us so fast and with so much interest for it  . This is great cause Non Serviam Records listened the full album and believed in our work . We knew it by occult metal band Darkend and Nazghor that personally I love . Signed for NSR and planned work and promotion . At moment we’re reading reviews and they are all excellent , working for live events and a new single composed by a cover song but prefer don’t say nothing before it come out .

Demiurge Of Shadow is our first full album with a different line-up and we were searching a sound .Past sound was very inspired by symphonic black metal albums like In The Nightside Eclipse by Emperor or Spiritual Black Dimension by Dimmu Borgir . Was my first work after ten years inside Theatres Des Vampires line-up so I wanted to get away from gothic scene and return to style close to me . Started with simple riffs and classic orchestral sound . After first album we started to write new material more heavy and less inspired , cutting orchestral sound and introducing sidereal and synth keyboards for a more cold and cosmic dimensions . It’s an album with different line-up and different attitude than years ago .

3.What are some of the lyrical topics and subjects the band explores with the newer music and also how would you describe your progress as songwriters over the years?

At beginning was very simple to fall into lyrics about norse mitology cause now is trendy but I wanted music more close to cold and dark dimension like arctic sky during the night . Exploring a frozen peak under black stars and cold steel where there is no life , no gods but only disturbing silence . Elements’ Blackest Legacy is not a concept album but try to open the door on this dimensions through its atmospheric music and lyrics . Zilath’s lyrics
try to describe these sensations of darkness and crystallizing moons .

4.Some of your lyrics also touch on Satanism, Occult and Anti Christina themes, can you tell us a little bit more about your interest in the dark arts?

I think Satanism and Christianity is the same product generated in the name of mass control. Christianity and Church used devil icons to subject people and lands for their dirty purposes replacing the old pagan traditions but a great part of men were fascinated by evil icons cause
undoubtedly witchcraft and demons are more charming than angels and holy life . They are part of darkside of our mind and I’m interested to exploring any darkside . Generally we use word occult for something that we don’t understand or have explanation and we see a sinister side but how many phenomena of nature we can see and can’t understand? Part of men try to understand through dark arts or spiritual sensations .

5.What is the meaning and inspiration behind the name 'ShadowThrone'?

It’s simple remind to Satyricon’s album The Shadowthrone . Probably for a little part that’s right but at beginning was imagining a throne into a cave inside a black mountain like in Lord Of The Rings book and decided for this name .

Elements’ Blackest Legacy artwork realized by occult artist Nestor Avalos that worked for Dark Funeral , Moonspell , Rotting Christ… It represents the pure elements of the earth like ice , fire , air and water . If you start from down to up you can see the colors change from red like fire to white/blu like ice with a flow of energy on mountain of skulls .

We done good shows last years to promote Demiurge Of Shadow . I don’t remember if there is a best show cause every show was different and different feelings . Toured with Absu , Rotting Christ , Arcturus … and honored to play in front their crowd . Our show is a simple show with dark lights  and smoke without a theatrical performance . We like to go up on stage and play our songs so people can listen our music without show distractions . I think we play like a classical heavy metal band J

At moment we are guest at Ade’s Rise Of Empire released party on November 29th and confirmed at Black Winter Fest XII with Hellhammer , 1349 , Kampfar and other bands .on November 30th . We’re planning gigs and show for 2020 so we need to wait answers .

9.On a worldwide level how has the reaction been to your newer music by fans of symphonic black metal?

Great ! Reviews are excellent and every day new fans follow the band page . Rates under the singles Path Of Decay and Black Dove Upon My Shoulder are good cause this is not like usually symphonic black metal inspired by Cradle Of Filth or Dimmu Borgir . We pushed inside new album our influences from old black metal to death metal passing for soundtrack and avantgarde atmosphere .

Francesco and Davide have their projects inside other bands like Deceptionist or Brvmak but I don’t know their upcoming events for these bands . Zilath was the singer of Etruscan black metal band called Voltumna and at moment he’s the Shadowthrone’s singer . About me I ‘ve an upcoming old black metal side-project  involved with members of two Italian black metal bands but prefer to talk about this when album will be complete .

I don’t know . I like to write new material everytime and now I’m writing new tracks .
Life can change in every moment .

I started to listen heavy metal when I went at school , very young , buying Ozzy Osbourne’s Speak Of The Devil vinyl cause the artwork was amazing . From there I started to listen the rest like Iron Maiden , Motley Crue , Metallica , King Diamond / Mercyful Fate but during 90’ I was reading about Bathory , Emperor , Mayhem , Darkthrone buying paper zines and ordering albums by mailorder (have original first press) . I think all these bands and many others inspired me for the rest of my musical life and part of style life . Listen metal music everyday finding new actually bands.

Posted by OccultBlackMetal at 11:52 PM No comments: 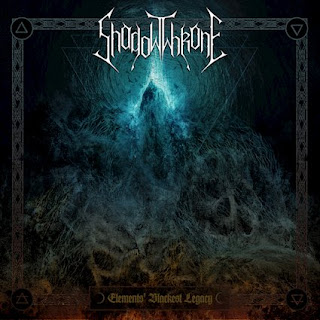 When  guitar  solos  and  leads  are  utilized  they  are  also  done  in  a  very  dark  and  melodic  style  along  with  the  faster  riffing  also  adding  in  a  decent  amount  of  tremolo  picking  as  well  as  some  of  the  riffing  also  showing  an  influence of  thrash  metal  and  as  the  album  progresses  choir  vocals  can  also  be  heard  briefly  and  at  times  the  music  also  has  its  avant garde  and  atmospheric  moments,  one  track  also  introduces  spoken  word  parts  onto  the  recording  and  the  album  closes  with  an  instrumental.  The  production  sounds  very  professional  while  the  lyrics  cover  Fantasy,  Nature  and  Black  Magick  themes.

http://www.facebook.com/shadowthrone
Posted by OccultBlackMetal at 5:08 PM No comments: