Nick: Tongue Eating Louse is the culmination of years of trying but always failing and I think you can really hear that pain and disappointment in the recordings. We’re a Sludgemetal four piece, from Ontario, Canada in the styles of Helpless, Buried Inside

And Lord Mantis. I’m the drummer, I came onto the project in 2015, a year before we recorded the ST/EP.


2.You have your first full length coming out in August, what are some of the things you have done differently on this recording that you where bot able to do with your previous releases?

Nick: I think the length of the songs on the album are an obvious distinction. We’ve been sitting on these songs for a while so to finally have them coming out is actually kind of freeing. I feel like Voidwalker was the album we we’re always trying to make but just didn’t have the power to materialize.


3.What are some of the lyrical topics and subjects the band explores with the newer music?


Nick: I have spoken with John about this many times and from what I can tell Voidwalker is about being dead? It’s a concept album about leaving your body after death and traveling to other side, or walking the void- if you will. I told him it sounded kinda boring but he believed in it, oh well!


4.What is the meaning and inspiration behind the name 'Tongue Eating Louse’?

Nick: I wasn’t in the band when they named it but I can give you my idea of what probably happened. Rob suggested the name Tongue Eating Louse and no one heard him, then, moments later either Beau or John said “I know, let’s name it Tongue Eating Louse!” And the rest is misery.

Nick: It was a design we had stumbled upon on Instagram by Curseofface, he’s done stuff for Power Trip and Mammoth Grinder. It goes with the theme of the album so well you’d almost SWEAR it was commissioned but I can promise you that it wasn’t because before that I was pushing HARD for the dudes to use an old Tom of Finland picture as the cover to literally no avail.

Nick: awkward and loud like a teens first time. Our best show was probably in Oshawa with Pink Cocoon, a sick blusey stoner doom band from Montreal. The crowd was awesome and the tunes were loud. 10/10 Would relive again with some minor changes to the bill.

Nick: none. I never want to be in a car with Beau for longer than three hours. I fear his lust for Alex Jones level conspiracy theories has driven him to a point of involuntary celibacy and I don’t know who to talk to about it. Aside from that Canada is the real void, getting around out here takes too long.


8.A year ago you where a part of a split with 'Hunter, Gatherer', what are your thoughts on the other band that had participated on the recording?

Nick: I love the dudes from HG. On some Lost Highway shit I've been in Garrets apartment like three times without him even knowing. I wish they would release more music, their blend of post-black metal is sensible, stylish and innovative like a car of Asian design. Garret and Kelsi both are in a sick cockrock band called Thunderkok now. Their IG is thunderkokrocks.


9.On a worldwide level how has the feedback been to your music by fans of black, sludge and doom metal?

Nick: The reception has been great, I’ll never forget that time we got bumped by the (now defunct) meme page Dab Moms. I’m excited to be working with Sludgelord records on the full length release, their releases so far have been so strong so to be included among them is the real shit for me. Finland is a big demographic for us, so I just want to shoutout all our Finnish readers and listeners, you guys ARE the band!

Nick: indigenous is a good gauge for the future. It's actually a cut off the next album. We want to do shorter songs for the next album, think 7-8 minutes instead of 11 -17 with more blasting, we talked to advertising about it and they say it’s just good optics.

Nick: When I was 16 there was like 3 bands, now Im 24 and there are at least 50 that I know of. Death, Pig Destroyer, Korn, The Locust, The Black Dahlia Murder were some of the first metal bands I discovered. I didn’t really discover sludge metal until around the time I was asked to play in Tongue Eating Louse, by that time I was digging on bands like Trenches, Black Sheep Wall, Disembowlement, Eyehategod, and Melvins and I had already been to a few TEL shows before that so when Beau asked me to join I was pretty stoked.


Nick: Comic books, obviously I smoke weed everyday- just to stay fresh. Those two bitches from ABBA are hard, I love how powerful they are. uhhh, beyblades are still hot here, so that’s nice. Serial killer docs are hard, if I had to make a band out of my favourite killers Id have to say Dc Snipers on the drums, for their precision, The Night Stalker on Guitar, zodiac killer on bass (could literally be anyone with a balaclava on) and of course the greatest killers of all Hilary and Big Bubba Bill Clinton on dual vocal duty, they got it in ‘em.


13.Before we wrap up this interview, do you have any final words or thoughts?.

Nick: Yeah, I just wanted to give a shoutout to Zac Murray of Gland. Hey! Where’s the ketchup?! Also S/O to Nina Simone for dedicating her life to making the music she had to make not the music she wanted to make. Voting is important, please vote and be involved.

Posted by OccultBlackMetal at 8:51 PM 2 comments: 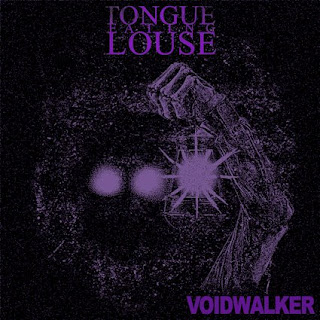 Tongue  Eating  Louse  plays  a  musical  style  that  takes  black  metal  and  sludge  and  mixes  them  together  to  create  a  sound  of  their  own,  the  production  sounds  very  professional  while  the  lyrics  cover  Occultism,  Shamanism  and  Alchemy  themes.

https://thesludgelord.bandcamp.com/album/voidwalker
Posted by OccultBlackMetal at 7:22 PM No comments: