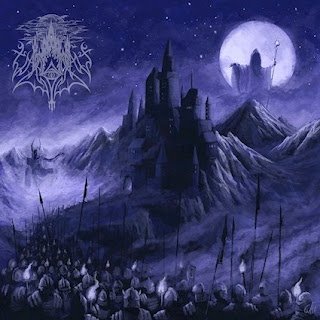 A  very  dark  and  ritualistic  sounding  intro  starts  off  the  album  while  also  introducing  symphonic  elements  onto  the  recording  which  also  mixes  in  with  the  heavier  sections  of  the  music.  During  the  faster  sections  of  the  songs  a  decent  amount  of  tremolo  picking  and  blast  beats  can  also  be  heard.

Posted by OccultBlackMetal at 4:00 PM No comments: 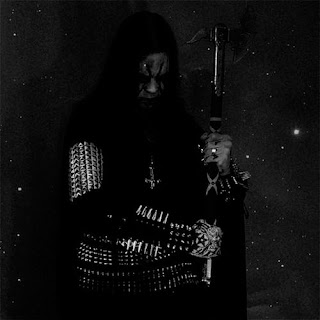 The band originated during starless nights in late 2015.
As the vision calmly evolved and the cloak of obscurity relinquished, Vargrav was chosen to be illuminating sign for this act of black arts.
During the formative years, the music also transmitted into a profound abyss, only to reincarnate as a sinister glow of the black flame.
A demo version of the album was then unleashed during the summer of 2016,
and  after numerous contacts from different labels, Werewolf Records was immediately chosen to be the most suitable collaborator with which to work.
The overture of a black-hearted storm has been sung and what has yet left uncovered shall be conquered...

2.You have an album coming out in January, how would you describe the musical sound that is presented on the recording?

After the two preview songs were published  I received a lot of feedback about the sound and overall atmosphere being very 90's.
I can't really say is it done intentionally or is it just subconsciousness. Nevertheless sounding 90's is purely logical as for me the golden age
of Blackmetal is in the early and mid '90's when everything around it was new to me. Naturally it's impossible to imitate first impressions
when I first time heard some of the classic albums but creating something as close to that as possible I can uphold the passion that ignited back then.

The topics alternate from unleashing the black storm of hellfire upon all living to glorifying the supremacy of an individual. In the middle a certain
multidimensional approach to reign the powers shackled by constricted knowledge of your capability.

4.What is the meaning and inspiration behind the name 'Vargrav'?

Varg (wolf) has been a feared beast among many cultures for centuries and  in the bible wolf is exclusively evil. Yet wolf has also been seen as a trailblazer
and a teacher. Grav (grave) is where you bury the dead (if someone didn't know) so as an coherence Vargrav is the rest where a bestial wisdom lurks only to rise again.
It's also a palindrome with 7 letters. A palindrome is endless and a continuum. After reaching the end the beginning is the new end.
7 is the number of complement. A number of time and space, representing wisdom, perfection, balance and immortality.

Compromises kill creativity and when working with others one cannot avoid them. So because of that simple fact I work solo on
all of my bands. Even if it demands a multiple amount of work I couldn't be satisfied with the result if it wouldn't be 100% based on my vision.
It would also be impossible to even think joining a band only as a player. I am a leader, not a follower.

6.On the album you had also done a cover of Emperor's "Ancient Queen", what was the decision behind doing your own version of one of their songs?

Since the first time i heard Emperor's "In The Nightside Eclipse" no other album has ever made such an impact. I could even call it an enlightenment as
in that same moment I knew exactly what I must do. It took me over 20 years to complete that task but time is irrelevant when creating timeless art.
When listening to "Ancient Queen" I've wondered so many times what it would sound like with more keyboards and some clean vocals as in "In the Nightside Eclipse" style.
So recording this cover was a perfect way to get my question answered.

7.The album is going to be released on 'Werewolf Records', can you tell us a little bit more about this label?

The name basically tells it all. An unchained beast seeding terror and fear among those incapable to assimilate it's purposes.
An uncompromising monument of black arts.

As the current trend is pretty far from symphonic Blackmetal it seems that for many people it works as a stimulant ascending from the vast grey mass of thousand similar bands.

9.Are you also involved with any other bands or musical projects?

The only active band beside Vargrav at the moment is Druadan Forest - My first solo band which I started back in 1998 only to be put to rest for 17 years. 2016 I was finally ready to release the debut album "The Loremasters Time" via GS productions. The three demos
from ´98-´99 were also released as a compilation by the same label. The second full-length "The Lost Dimension" was released by Wolfspell records 2017. Also a split with The True Werwolf will be released in near future so check it out.

10.Where do you see yourself heading into as a musician in the future?

I try to evolve all the time. The point where you feel satisfied is the point where you can't advance any further and basically can forget any improvement from your past works.
I started musical studies back in the 80's and unfortunately quit after few years so I have a lot to catch up. In the future - if my efforts should pay off and I'll be able to move even a bit closer to the goals I've set, I see
myself as a full-time professional musician and composer.

There are tons of bands that have influenced my but as said above Emperor has always been the most important and one of the few metal bands that have truly inspired me.
I've never actually seen myself as a metalhead, headbanger or such. Of course I've listened to metal for as long as I can remember but still never felt musically inspired by it.
I enjoy melodies, atmosphere, a sort of surreal soundscapes that I can feel being similar. Seceded from reality.
Nowadays I mostly listen to electronic music and soundtracks.

12.How would you describe your views on Occultism?

I am a Satanist.

Blackmetal is not for everyone.

Posted by OccultBlackMetal at 6:56 PM No comments: 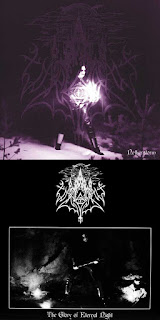