Sick To The Back Teeth Interview

1. Can you tell us a little bit about the project for those that have never heard of you before?

yes. sick to the back teeth is a solo music project where i record all kinds of different music. i put no restrictions on myself in terms of style or concept or rules. it's just whatever music i feel like doing. i started using the name in 2002, so this is the tenth year of doing this.


2. How would you describe your musical sound?

there's no one sound for me. i make rock, metal, noise, folk, electronic music, sometimes all in the same piece of music. there are no limitations. i will say that some of it takes an experimental approach but not all of it. and that most of my music is conceptual. especially if it doesn't sound like there's a concept. some of my music isn't about music at all.


3. What are some of the lyrical topics and subjects the project explores with the music?

so many. i have some albums which deal with very specific subjects and i think these are relatively obvious. i don't like to explain them, though. they are meant to be interpreted by the listener. but speaking very broadly, i tend to come back to some themes often: love, sadness, nature, fantasy.

sick to the back teeth is an expression that means to be completely fed up of something. i just liked it.


5. Are there any other members involved with the project or is this solo?

it's just me. there are some rare cases where i've had guest musicians or collaborated with people and they are given credit on those songs. but it's mostly me writing all the songs and performing all the music.


6. Currently you are signed to Drowning, how did you get in contact with this label and how would you describe the support they have given you so far?

well, i am not signed to any label. but Drowning is great. i liked the releases that i heard and i liked the aesthetic so i sent in an album. i was glad that they decided to include it. i think it's a good fit.


7. On a worldwide level how has your music been recieved by fans of underground music?

i don't think it has been received much at all. this is the first interview i've been asked to do in five or six years so i don't think anyone is aware of me. about once a year i get an email from someone who says they liked something i did and that's nice. that's about all.


8. Are there any other projects besides this band or is this full time?

i just played in a metal band for a couple of years called Pegasus Void. i played guitar, sang and wrote the songs. our album is coming out soon. it's mostly doom metal but there are are elements of space rock and black metal as well. now i play in a rock duo called the Starling Quintet. it's not metal at all. but i'm never going to stop doing music as sick to the back teeth.


9. What direction do you see your music heaning into on futre releases?

hopefully all different directions. currently i have been recording and releasing one song every week on this blog: http://sick-to-the-back-teeth.tumblr.com/ i also put old releases and previously unreleased material on there.

i will be releasing a new musical score for a film very soon. probably a rock album after that. then, who knows?


10. What are some bands or musical styles that have influenced your music and also what are you listening to nowadays?

all different kinds of stuff. although instead of musical influences, i would say that sick to the back teeth is most connected to the surrealist art movement and i would describe most of my music as surrealist music. i'm influenced by dreams.


11. Does Occultism play a role in the music?

no, but that is not to say that i haven't at some point been inspired by the idea of something related to occultism. i'm inspired by all sorts of different things.


12.Outside of music, what are some of your interests?

currently i have a weekly radio show on the greatest radio station in the world, WFMU. my show airs sundays at 3-6am EST and you can listen online at http://www.wfmu.org/

thank you for taking an interest and i wish you the best of luck with your zine!

Posted by OccultBlackMetal at 9:20 PM No comments: 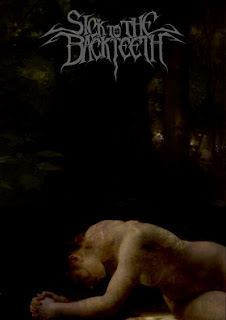 Sick To The Back Teeth are a project from New York that combines drone doom with black metal, improv and noise and this is a review of their 2010 album "Full Body Heartache" which was released by Drowning Productions.

Drums and bass guitar are all absent from the music with guitars being the only instrument on this recording.

Guitars are all slow riffs that combine drone/doom with black metal and noise with alot of heavy distortion and there are no guitar solos or leads present on this recording, in addition the whole album is a 30 minute long song.

Vocals and song writing are all absent from the recording with the music being all instrumental, as for the production it has a very dark, raw and primitive sound to it.

In my opinion Sick To The Back Teeth are a very great sounding black/drone/doom metal/improv/noise hybrid and if you are a fan of this style, you should  check out this band. RECOMMENDED BUY.

Posted by OccultBlackMetal at 4:24 AM No comments: