Can you give us an update on what is going on with the band these days?

-Since the EP was recorded with session musicians,that leaves me as the only         original member in the band. At the moment all is in the open and there are no definite plans for the future. Now we are just waiting to see what happens and what the future will bring.


How would you describe the musical sound  of the new ep and how it differs from previous releases?

-The new EP is in my opinion a lot darker, harder and definitely more symphonic than our debut album. The atmosphere and the all around production is very different from before,for example the guitars are more on the surface as well as the vocals and the drums have a little bit of a more natural sound.

The band uses all operatic vocals, instead of growls and screams, do you feel this gives the music alot more power?

The song lyrics are based on a concept, can you tell us a little bit more about it?

-I have a little bit of a problem with explaining my lyrics afterwards since I have a tendency to go in a bit of a daze while writing and I tend to forget what I was thinking of at the time.I guess the full story is really for everyone to interpret as they please but the main concept is kind of blind leading the blind,which in this case is more of a hypocrite leading a hypocrite to their own destruction.

5.What is the meaning and inspiration behind the bands name?

-After throwing some ideas around we came to the conclusion that In silentio noctis, which means in the silence of the night, would be a nice fit to describe our music.
There's really no deeper inspiration behind the name.

The band broke up for a short time, can you tell us the cause of the split and the decision to reform?

-The cause of the split was really due to lack of motivation and time from other members of the band and it seemed like the best decision just to call it quits.
I didn't really like the idea that some of our best songs would be left unrealeased, so when the time was right I started working on towards getting them recorded.
I managed to find some great musicians to do this with and I'm really pleased with the end result.


What are some of the best shows that the band has played so far and how would you describe your stage performance?

-We have only played one gig during our seven year existence which is mostly due to the lack of a drummer.

Do you have any touring or show plans for the future/

-There has been no discussions of any touring for the future.At the moment we are just going with the flow and see what happens.Everything is possible though.

On a worldwide level how has the feedback been to your music by fans of black and symphonic metal?

-Most of it has been great and some not that great.It's always good to hear that people appreciate what you do,it really gives you energy to keep going.Since the new EP isn't out yet there hasn't been a lot of feedback but I really hope that people will like it.

10.What direction do you see your music heading into on future releases?

-Well see,if we decide to release another full-length it will most likely be more in the line of the EP than our debut.

11.What are some bands or musical styles that have influenced your music and also what are you listening to nowadays?

-I can really only speak on my own behalf and since Elias is the main composer of our music I can't really say what his main influences are. The first metal band that I started listening to was Cradle of filth, so that has influenced a lot in what type of music I want to make and also had a lot to do with the birth of In silentio noctis.
Nowadays I mainly listen to bands such as Belphegor, Carach angren, Azarath,Dark funeral and so on.Most of the albums that I have are black metal in some form or the other.

-Thank you very much for the interview and stay black metal! 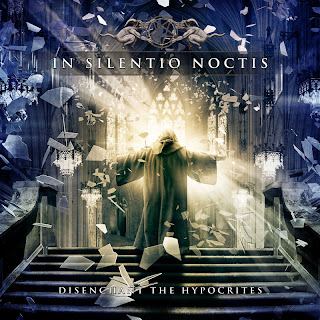