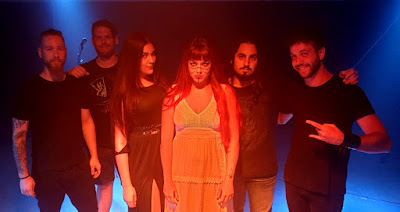 Velkhanos is a band established in 2018 and is set apart by a broad fusion of styles within metal. It is made of Miriam on vocals, Fernando and Pablo on the guitars, Ángel on bass guitar and Jose Antonio on the drums.

2.Recently you have released your first album, can you tell us a little bit more about the musical style you went for on the recording?

The style we chose was not to choose any style. We wanted to do whatever we felt like, taking bits and pieces from here and there and knock something different in to shape. We thought: “I like Death, Heavy, Black, Power… Why should I have a different band for each style? So we started working on each track while letting ourselves get carried away, experimenting, looking for a connection between styles… In the end we are very pleased with the album, with rythms from Melodic Death and Black, solos from Heavy and choruses from Power. This might have many dectractors, we are aware of that. The next album will be very different and we think that’s the beauty of it, being able to change (within certain limits) and set labels aside.


3.Some of your lyrics touch on mythological themes, can you tell us a little bit more about your interest in this subject?

This album in particular is centered on religion, that’s why there is some mythology in there, although we have tried to steer clear of clichés, avoiding names of gods or beings. The idea was to talk about the relationship between God and human beings. Who created who? Do we try to justify our actions in the name of a greater good? Are our successes or failures the favour or punishment of some deity? Fernando has always been really into literature, history and philosophy.

Our lyrics are based on these concepts, beginning with Bring Me The Fire which is about afterlife, the struggle amongst religions to add another soul to their list; about the Inquisition (The Eye Of God), the search of a god’s compassion through sacrifice (Moloch) or simply telling a tale such as Dagon, H. P. Lovecraft’s work, which also fits the album theme.


4.What are some of the other lyrical topics and subjects the band has explored so far with the music?

For our new álbum we are doing a lot of reading and researching material of historical character, even though we are going to embellish it with rituals and witchcraft. We have a good baseline story to write a great album. We cannot give up much more, but, in general, we have very diverse interests.


5.What is the meaning and inspiration behind the name 'Velkhanos'?

Velkhanos was the god of fire and nature according to Cretan mythology. We are really passionate about Mediterranean culture and all the blend of civilizations it entailed. Velkhanos, the god, has been present in the great Greek and Roman civilizations, which are precisely the maximum representative of Mediterranean cultural symbiosis. Velkhanos, the band, is a symbiosis of styles within the Metal. This made us relate and also lead us to center our first album on religion.

The Cover is the work of Fátima Ruiz, photographer and a great artist. Fernando and Fátima worked for a few days on the concept and the idea materialized. Our cover has the four horsemen of the apocalypse as its context, along with the central figure, the Wrath. This character ends up being a combination of the other four and it’s the liaison between the human being and the gods. The Wrath is both divine and mortal at the same time, ones feel it for the other, reciprocally. Some feel love and some feel hate, but the Wrath is inherent to both. To be honest, we are very happy with the job done.

The best shows are the ones yet to come. For “The Wrath”’s tour we are working on a good stage production, with an important visual impact. We want for the audience to dive into the songs and enjoy it as much as they can.

8.The new album was released on 'Art Gates Records', can you tell us a little bit more about this label?


Art Gates Records is a label with years of experience who works with some of the leading bands currently on our country, such as Noctem, In Mute, Irdorath, Leo Jiménez, Morphium, Injector… We are very happy to be able to work with them and they do make things easier for us.

We have come across all sorts of reactions, some very good and some not so much. There is people who love changes, blends, growing in the musical sphere and experimenting. On the other hand there is people who are more of a purist who feel this mixtures are almost sacrilege. You cannot please everybody and we would rather do what we enjoy, mix as many styles as we like or elements we like from each of them.

We are going to keep working on the path we are currently taking, polishing the mistakes we have made and that we now see from afar. We will do a new album more complex and contundent, with room for experimentation. We will no longer be driven by the wish to release material so it will be and advantage for doing a well rounded job. We already have some tracks and they sound impressive.

We like many bands of many different styles, and our favorites don’t even come sound close to what we do, so we would not say we have any models. Which is to say, we don’t plan for the band to sound like the bands we like, we aim to sound in a way we ourselves like in a given moment. It is something hard to explain, but we basically try to stay away from influences. Bands we listen can be as diverse as Iron Maiden, Metallica, Helloween, Gojira, Vhäldemar, Soulitude, Grimah, Amon Amarth, Nightwish, Mgla, Fleshgod, Death… The list is never-ending.

We love cinema, literature, food and drink. We often do barbeques to strengthen the bonds between band members. We also like sports such as mountain climbing, horse riding, cycling…

We would like for everyone to give the full album a chance, you might not enjoy one track but you will like some other, and for the listener to enjoy all of the work we have put into it. We are looking forward to going out on the road to present our album and giving the audience the best we have. 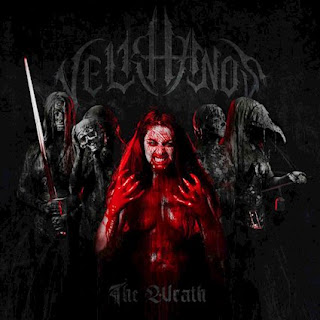