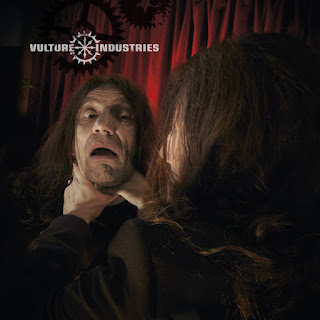 Vulture Industries are a band from Norway that plays avant garde Norweigan Black metal in the mid 90's vein and this is a review of their 2007 album "The Dystopia Journals".

Drums are mostly slow beats that go along perfect with the music which is very experimental with some fast pats mixed in for good measure, while the bass playing utilizes a dark and distorted tone.

Rhythm guitars cover a lot of ground with some slow heavy riffs that utilize some palm muting and there is some mid paced to fast parts at times, while the lead guitars contain a lot of melody mixed with some distortion and the solos sound very professional and you can hear a lot of classic metal influences.

Synths when they are utilized sound very dark and avant garde which gives the music a very mysterious edge and they mix in some psychedelic and trippy parts as well, while the violins seem to be classical influenced, as for the vocals they cover a lot of ground with some clean opera type singing mixed with some high pitched black metal screams.

Production on this album sounds very professional and you can hear all of the instruments and this recording has a sound you would hear from major labels, while the lyrics seem very poetic and seem to have been influenced by gothic literature.

In my opinion this is a good album and it is good to hear an album like this these days and it has been years since I haver heard an avant garde black metal album like this, and if you are a fan of such bands such as Arcturus, Ulver, Fluerty, Vintersorg and other bands in that style you will not be disapointed. the best tracks are " Pills OF Conformity" and "Soulcage". HIGHLY RECOMMENDED.

Posted by OccultBlackMetal at 3:38 PM No comments: