1. For those that have never heard of you before, can you tell us a little bit about the band?
The proyect starts in summer 2011, when Drakhai and Sergio (ex Pagan Fire) decided to play together again the songs composed by Drakhai. On autumn, they both entered in Sons of Midgaard, introduced their songs and changed the name of the band to Heid. With them enters Marta, Sechem's flautist.
After a show on May 2012, the band decides to divide. Marta, Sergio and Drakhai decide to sing in Spanish and tell about History and traditions of their homeland, Castile.
From that autumn, different musicians have passed by the band and with them it was recorded its first demo, called “Heid”, in January. This was released on March, with Drakhai on vocals as they didn’t had any singer on the line-up. On June, Marta leaves the band. The present formation is not closed until August, with that in autumn 2013 they recorded their last EP “Voces de la Tierra Dormida”. This new EP contains 5 tracks where Heid mixes the rage of the Norwegian black metal, the sound of modern metal and deep ambiences made by the
sound of traditional Spanish instruments that will guide you on a travel that you will want to walk over and over again.
2. So far the band has released a demo and ep, how would you describe the musical sound that is presented on both recordings and alos how do they differ from each other?
The first difference is the studio quality and the voice. You can find the second one on the lyrics: at the demo we still wrote about some Norse mythology issues, but with “Voces de la Tierra Dormida” we declared ourselves a full-Castilian folk metal band.
3. The song lyrics cover Castilian folklore and Paganism, how would you describe your interest in this topic?
From high to wow much interest so Castilian such Pagan wow (hahaha)
4. What is the meaning and inspiration behind the name 'Heid'?
Heid is a character of Nordic Mithology that caused discord between night and day, between the physical and the mystical worlds. There are references to her at the first verses of the Völuspá.
5. What are some of the best shows that the band has played over the years and also how would you describe your stage performance?
We highlight the gig we shared with Pimeä Metsä and Survael last November in Madrid. The venue was full, we really enjoyed playing with those friends and the crowd gave a great response to our music.
6. Do you have any touring or show plans for the future?
On May the 2nd we are dated with Celtibeerian and Ocelon here in Madrid, and on November we are gonna hit the stage of Pax Julia Metal Fest (PT).We are working on more dates in festivals and venues outside Madrid, our
booking is open!
7. Currently the band is unsigned, are you looking for a label or have received any interest?
We have talked with some Spanish extreme labels but we haven’t signed with anyone. By now we are happy as an independent band, as no one brings an interesting trait.
8. On a worldwide level how has the feedback been to your music by fans
of black, death and folk metal?
Recently we’ve received a review from the US giving us 5/5 stars. In Romania and Russia our EP has reported us very respectful words, and inour country the public is having a very good reaction. People abroad and Spaniards are understanding our proyect and the work made by the producer Erik Monsonís and Destroyer Management is making everything easier.
9. Where do you see the band heading into musically during the future?
We’d like to offer a deeper and richer vision of the Castilian folklore through our own style, without closing any door to genres and sounds.
10. What are some bands or musical styles that have had an influence on your music and also what are you listening to nowadays?
Moonsorrow, Numen, Ensiferum, Korpiklaani, Helheim, Aiumeen Basoa, Arkona in the folk metal scene; Lamb of God, Molotov Solution, Immortal, Marduk, Crimfall and some names and forms from the Renaissance period.As we are six people in Heid, we come from different styles but we all have in common the extreme music and the folk.
11. Outside of music what are some of your interests?
We love food and cooking, and we enjoy learning about History.

12.Any final words or thoughts before we wrap up this interview?
We’d like to thank you for making us this interview; it’s a great support for us! And we’d like to talk directly to our readers: listen to us, give us a chance and let us know what you think!

Posted by OccultBlackMetal at 3:41 PM No comments: 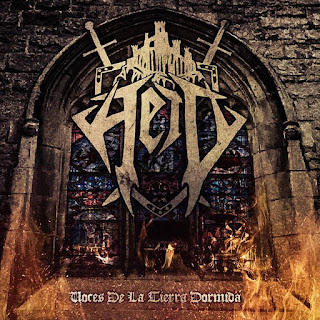 Heid  bring  a  great  amount  of  death  metal  into  their  melodic  pagan/folk  metal  sound  while  also  keeping  around  the  black  metal  elements  that  are  a  huge  part  of  their  sound  along  with  a  very  powerful  and  professional  sounding  production,  and  the  lyrics  are  written  in  Basque  and  cover  Paganism  themes.