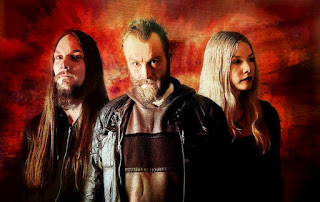 1.Can you give us an update on what has been going on with the band since the recording of the new album?
1.Since that we've gathered live members to relieve me from the guitar duties. Then prepping for gigs once a week. During this time we've also had a debut show at the REVOLVER scene in Oslo, which went quite well I'm glad to say. I was surprised to see that the venue actually became sold out. Secondly, we played at The Howling Infinity festival in Germany which was lots of fun. Some of the audience was really good and obviously happy to witness out contribution. Especially Marlon Crudo Crudo,Tim Simonis and Marco Saloni, which is three of the most hardcore supporters of this scene. (thank you guys for everything)


2.You have a new album coming out in June, how would you describe the musical sound that is presented on the recording and also how does it differ from your previous releases?
I guess I would describe it as unfiltered madness, echoing through a downward spiral and profused in a human being with invisible manacles attached to his feet. A blueprint of the automatic destructive entity that runs the machinery of the human mind.
A complete "out of balance" creature, neglected and cast into the shadows of himself BY himself.A rotting form of human flesh and psychè.Conveyed through music with an unpolished, raw, yet crystalized sound, executed by Cam Ill at HVN Recordings (glad to have you on board brother)


3.The band has been around since 2003 but waited until 2016 to release any music, can you tell us a little bit more about the earlier years?
Those years I was desperatly striving with keeping my head abow water,mentally speaking, and gathered a lot of inspiration from it. During that period I also recorded the vocals for The Deathtrip album "Deep drone master". A lot to say about that period if I would want to, but it's in the past, and the past doesn't exist any more than a thought in the NOW.

4.I have read the band originally started out more as a folk infuenced project, what was the decision behind going into more of a black metal direction?
m,yes, this is true on one level. I did want to convey stuff through an output much like a folkish thing, but that didn't really cover the whole "story", so because of the intensity and the agitated state of mind I was in I needed to express it with a more fierce sensation.
Whether it's black metal or not I don't care. I just needed to express it like that whatever you wanna call it.


5.What is the meaning and inspiration behind the name 'Urarv'?
Urarv means "Ancient Heritage", and is meant to portray something that lies hidden deep inside all of us. Which we have forgotten but which is the very source of existence.Our home, if you may.And the music is a portal to open the gates of memory in order to return home.

6.The symbols on the album cover look almost alchemical, can you tell us a little bit more about the artwork?
I'm a huge fan of occult symbols. Always was, still is. And one day, figuring out what to tattoo on my skin I realized that I could create my own symbols instead of using other peoples. So I entered some kind of an internal process where I began forming these lines due to different life experiences and events which magically gave them all a meaning as well.I made a map of nearly two houndred different symbols.


7.What are some of the best shows that the band has played over the years and also how would you describe your stage performance?
We've only played two shows so far so I have very little to comment on at this time.

8.Do you have any touring or show plans once the new album is released?
Yes, we have some upcoming shows in Norway,Belgium, Romania,and Ethiopia. Really looking forward to that.

9.On a worldwide level how has the feedback been to your music by fans of black metal?
It's been mixed, of course, all else would've been strange, but all in all it's been overwhelmingly positive and even inspirational I'd say.Seems like a lot of people makes use of something that stands out from the crowd a bit, something that offers a new way of thinking and a relief from the decadence of the decaying Black Metal scene, which basically has by far become just a parody on itself in many cases.

10.What is going on with some of the other bands or musical projects these days that some of the band members are a part of?
I don't know.I think Trish is involved in about 5000 other bands and Sturt is messing around with the next Troll album besides dealing with his other bands «Blindfisted «and «Whip».


11.Where do you see the band heading into musically during the future?
I have no idea, nor do I care. I just wanna compose my riddles of sound, execute them live and record them on a physical format for people to enjoy. I have no plans or intentions to « conquer the world « with it, and even if I did we don't play boring music enough to become big.


12.What are some of the bands or musical styles that have had an influence on your music and also what are you listening to nowadays?
I've drawn a lot of inspiration from 80's heavy metal and 70's punk, but also some themes from elderly jazz and gothic blues.
I listen mostly to Heavy Metal, Psychedelic Trance and Underground hip-hop

14.Before we wrap up this interview, do you have any final words or thoughts?
Thanks to all of you who support the band and what we do. Without you, this would not be possible, which means that your presence and contributions mean everything to us. May you all have a long and happy life :) 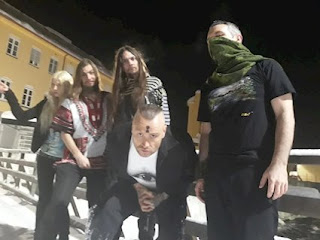 Posted by OccultBlackMetal at 4:51 PM No comments: 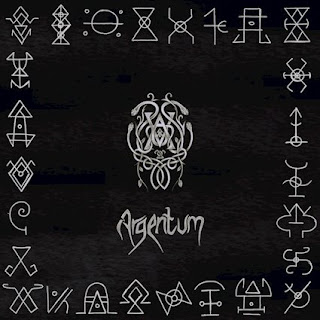 Ethnic  instruments  and  ritualistic  voices  start  off  the  album  before  going  into  a  heavier  musical  direction  while  the  faster  sections  of  the  songs  also  use  a  great  amount  of  blast  beats  and  tremolo  picking  along  with  the  vocals  being  mostly  grim  black  metal  screams  and  all  of  the  musical  instruments  have  a  very  powerful  sound  to  them.

Urarv  plays  a  style  of  Norwegian  avant  garde  black  metal  that  they  take  into  a  more  modern  direction,  the  production  sounds  very  professional  while  the  lyrics  are  written  in  Norwegian  and  cover  esoteric  and  emotional  themes.

Posted by OccultBlackMetal at 5:27 PM No comments: