JcReiss: After the departure of lots of members for various personal reason, rest Spleen on vocals and Dies, Principle composer , orchestration and guitar, the band is reformed with three new members, Raido on guitar ,Robin (basse) and me at the drums. We worked on our new album “République” since 4 years about. It was a hard work to compose, and especially very long, but we are rather happy with the result.

JcReiss: We like to call our music Extreme Metal Orchestral, because of the relatively permanent presence of orchestration. I can say that the old albums had a little less of orchestrations than “République”. We wanted something more symphonic, but keeping the spirit of the band. Also some will call our music “Black\Death metal” or simply “Black metal symphonic”.

3.The new recording is a concept album, can you tell us a little bit more about the lyrics?

JcReiss: “République” is a criticism of the french deep politics, from fondation of the republic to the actually. We talk about reasons, in our sense, which started like an idea of peace by the people, gradually switched to an oligarchy of banks and powerful, like in many states. Through the text, we trying to address, identify the actors, causes and consequences of these that we feel do not serve the people and the state, and destroying all democratic protocol. The songs of the albums are successive, starting with analyzes of ancient civilizations to the current chaos, this totalitarian and capitalist oligarchy, which destroy all the peoples.


4.The band has been around for 13 years but so far has only released 3 albums and a demo, can you tell us a little bit more about the gaps in between releases?

JcReiss: Malevolentia is a band exacting with himself and I think we like take the time . Lot of time is required for composition, lyrics and even more for orchestrations. The band changed several times of musicians too.


5.What is the meaning and inspiration behind the name 'Malevolentia'?

Dies: "Malevolentia" summed up perfectly the perspective of the group has its beginnings. It's meaning "malice, jealousy, hatred." There are several possible translations and i like to play with the polysemic side of our name.

Dies: Malevolentia has not done much concerts together. Already for reasons of unstable line up, but also because it is quite complicated to implement as much orchestrations on stage . Obviously these are sampled and not a real orchestra. But this requires a perfect synchronization with the sample and to have well-prepared musicians. the frequent change of line up were not allowed to play on stage as much as we would


7.Do you have any touring or show plans for the new album?

JcReiss: For now, we haven’t scheduled release tour. The album took longer than expected, and so we have not prepared performances. But probably within a year...

Dies: We'll start with a break of a few months since Spleen expecting a happy event for this fall. We will see that later in 2017.


8.The new album came out on Epictural production, can you tell us a little bit more about this label?

Dies: Originally Epictural was not a label but a grouping of musicians / composers of epic music (hence the name). I used this structure already to produce Ex Oblivion and negotiating distribution agreements. Over time this are added other groups like Einsicht, and soon Heimsgard Karne and an other band . In a few days we will also propose a distribution catalog that will be in by the time this interview is published online on www.epictural.fr


9.On a worldwide level how has the feedback been to your music by fans of symphonic black metal?

JcReiss: I have the impression that we are rather well welcomed by fans of the genre, even if the symphonic black is not a new style today. Fans of "true black" don't necessarily like our music but I think we can touch another public too.. Also, Symphonic Black band are not many in the world for me, and I hope we can touch people in other country.


10.What is going on with some of the other bands or musical projects these days that some of the band members are a part of?

JcReiss: We all have parallels bands and project in MALEVOLENTIA.Spleen and Dies have a side project called EINSICHT. It’s a “Dark Metal” band relatively insane. Dies play bass on this one.

Raido is also guitarist of the black metal band KARNE,and he have a side project called HEIMSGARD. He composed all his new album “Ordrag”, play guitar and sing on his album. It’s a kind of “Melodic Viking Metal” with Robin on bass too.

Robin have a parallel band called DOG’N’STYLE .who play “Heavy Rock’n’Roll”, and a “Death Metal Melodic” band called OBSIDIUM, in which he play bass.


11.Where do you see the band heading into musically during the future?

JcReiss: We want to quickly begin to compose a new album. I think the future album will keep this kind of sound, but with other thematics certainly less politic. We don't want to compose futures albums with the same theme , mybe less serious... or not. I can’t say more for the moment. For sure, orchestrations will remain.


12.What are some of the bands or musical styles that have had an influence on your music and also what are you listening to nowadays?

JcReiss: The first names that come to me are EMPEROR or ANOREXIA NERVOSA. I can say too original soundtrack from motion pictures . At home, I listen preferably Black Metal like Bathory , Aura Noir, Mayhem and many more or Death metal bands.

13.How would you describe your views on Occultism?

Dies: It's not really a topic adressed in Malevolentia. Each has its own spirituality but this is not an issue that we tackle in our songs. I am very critical about of the use of secularism. Really more than about christianism and religions generaly. But I'm not very religious. I find it hard to take seriously the question of occultism. Personaly I consider it more like a Newage fashion than a spirituality.

Posted by OccultBlackMetal at 3:43 AM No comments: 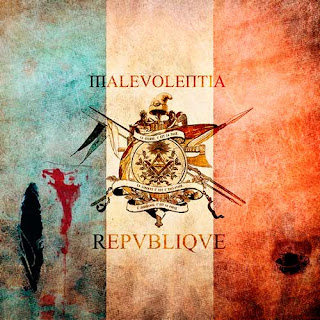 Malevolentia  plays  a  style  of  black  metal t at  is  very  aggressive  and  symphonic  while  also  mixing  in  a  touch  of  death  metal,  the  production  sounds  very  professional  while  the  lyrics  are  written  in French  and  is  a  concept  album  based  upon  an  Orwellian  type  of  society  with  deep  politics  and  some  occult  references.