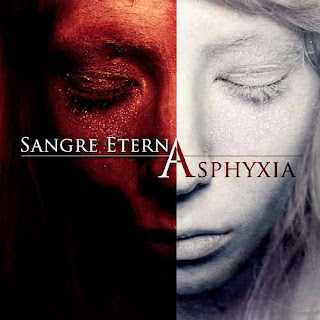 Sangre Eterna are a band from Serbia that started as a more symphonic gothic black metal band but evolved into a more melodic death/black metal band with this release and this is a review of their 2012 album "Asphyxia" which was released by Maple Metal Records.

Drums range from slow, mid paced to fast drumming with some blast beats, while the keyboards bring a very atmospheric and symphonic feeling to the music, as for the bass playing it has a very dark tone with riffs that follow the riffing that is coming out of the guitars and at times they have a very powerful sound to them.

Rhythm guitars range from slow, mid paced to fast melodic death metal riffs that have a black metal edge to them, while the lead guitars are very melodic sounding guitar solos and leads.

Vocals are a mixture of deep death metal growls and high pitched melodic death/black metal screams with some samples being thrown in at times as well as a brief use of clean singing male and female vocals, while the lyrics cover dark themes, as for the production it has a very strong, powerful and professional sound to it.

In my opinion Sangre Eterna are a very good sounding symphonic melodic death/black metal band and if you are a fan of this style, you shoulod check out this band. RECOMMENDED TRACKS INCLUDE "The Masquerade" "Seventh Angel" "Shattered Sun" and "Asphyxia"> RECOMMENDED BUY.

http://www.youtube.com/watch?v=ZCz8EJJHeEM
Posted by OccultBlackMetal at 6:45 PM No comments: