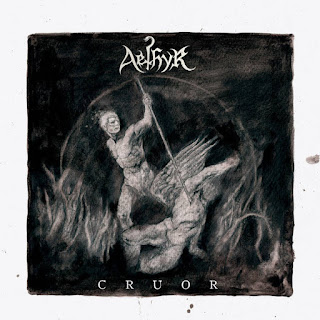 Distorted  sounding  drones  start  off  the  album  along  with  some  heavy riffing  and  melodic  guitar  leads  a  few  seconds  later  while  all  of  the  musical  instruments  on  the  recording  have  a  very  powerful  sound  to  them  and  when  the  music  speeds  up a   decent  amount  of  tremolo  picking  and  blast  beats  can  be  heard.

On  this  recording  Aethyr  goes  into  more  of  a  melodic  blackened  death  metal  direction  while  style  keeping  in  some  elements  of drone,  sludge  and  doom  metal,  the  production  sounds  very  professional  while  the  lyrics  cover  Occultism  and  Esoteric  Discipline  themes.

https://aethyr.bandcamp.com/
Posted by OccultBlackMetal at 7:39 PM No comments:

1.Can you give us an update on what has been going on with the band since the record- ing of the new album?

D - We've got the master of the album in our hands by the end of the summer 2014. Since then we've been doing some gigs & making new tracks, thinking about making a record for the future split or EP. New tracks are very different from the CORPUS! Also we were making video for CVLT single.

W - Also we were drawing a new artwork for the release.


2.You have a new album coming out this year, how would you describe the musical sound that is presented on the recording and also how does it differ from the stuff you have released in the past?

D - Aethyr has started as a duo, but now we are four-piece band. It was a long way from blackened-industrial-drone with only Aleister Crowley on the vocals, to the thing we've recorded for CORPUS.

W - I think that we are still trying to find out our own musical sound. We continue to try new things and mix styles in different proportions.


3.This is to be the first full length since 2010 and the first release since the split since 2012, can you tell us a little bit more about what has been going on during that time frame?

D - After the split came out in 2012 we became full four-piece band and started making all the music together, also making live shows. Music became more and more difficult and when we had enough material we went to the studio, but wasn't really ready. So we've re-recorded the album in 3 different studios during 2013 & 2014. During that time Aethyr came stronger as a band & have made some new tracks that we've decided also to record for the album and leave some old (more drone sounded) tracks behind.


4.Your lyrics cover Occultism and Esoteric Disciplines, can you tell us a little bit more about your interest in those topics?

W – As for me, it all has as metaphysical and as poetic sense. In order to understand the world we think of metaphors and signs. It's a way and attempt to look beyond reality. Staying alone with Abyss and comprehend himself and alone with the absolute.


5.I know that the bands name means the fifth element or spirit in occultism, how does this name fit in with the musical style that you play?

D – Our music – is the Aethyr for this world.

W - All our efforts in band it is a way to understand what is it Aethyr.

W - We have not a many gigs during this time. We play usually where coincides with the spirit and atmosphere of the place and other musicians in small clubs. There was also a memorable experience - a concert in the woods, it was the video material for the video of the single "CVLT" (www.youtube.com/watch?v=wnhaDGprw_I ).


7. Do you have any touring or show plans once the new album is released?

D – Supporting Primordial (IRL) is the nearest one. Tour – maybe.

W - We don’t thinking about that, but we open for any offers.


8.On a worldwide level how has the feedback been to your music by fans of black metal, doom and drone?

W - We are just beginning to assert itself, but nevertheless, thanks for the efforts of our label Cimmerian Shade Recordings - more people know about our music. And there are a few positive reviews already. This is very encouraging.

D - Our new tracks sounds more in melodic-black-death style. We speed up more and more)) Though we have one new classic doom-black track. But anyway - we don't want/don't like to make borders. If someone got a great drone/sludge riff - we'll make it, followed by great death riff, etc.


10.What are some of the bands or musical styles that have had an influence on your newer music and also what are you listening to nowadays?

W - There are too many. From bands playing dark ambient and drone to True Norwegian Black Metal. Old and relative new. And it's impossible to select one or two. I suppose it is a mixture of all of them )

D – Graphic design & photo, but music is the main interest all the time (with other projects & music styles).

W - We involved in art project http://rottenfantom.com/ together with my beautiful wife Elena. We making a dark and mysterious black and white illustrations. It is a second part of my life on a par with Aethyr.

W - Thanks a lot for the interesting questions. Music is an important part of human culture. It is a mixture that unites people across the globe. Listen to the good music and try not to do anything stupid! )

Posted by OccultBlackMetal at 9:23 PM No comments: 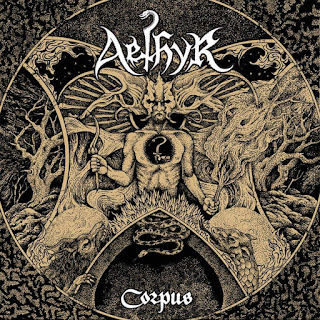 Aethyr  combine  a  variety  of  many  different  genres  together  from  black  metal,  funeral  doom,  sludge,  drone,  stoner  and  ambient  to  create  an  album  that  is  very  dark,  heavy,  and  ritualistic  sounding  while  also  being  very  original  at  the  same  time,  the  production  sounds  very  dark  and  heavy  while  the  lyrics  cover  Occultism  and  Esoteric  Disciplines.

.
Posted by OccultBlackMetal at 2:09 AM No comments: