After the recording, we did a Scottish tour then spent most of the winter writing; there’s a great residential studio in the hills we started going to which meant we could work towards mild insanity in isolation and jam 24hrs a day.  Since the release, we did a UK tour last month, with the last gig so far being Beermageddon next month;  we might do a couple more dates after that but then it’s back to writing for the next album.  We’ve hit a bit of a creative spell recently so we’re looking to build on that and get everything down while it’s still fresh.

The White Death EP is somewhat majestic and mournful as the sound goes; it’s still rooted in that death/black/thrash style but there’s a certain fatalistic melody going on which seemed to connect it to the whole “most kills” sniper concept.  Terrible but necessary death. Compared to the last album, the songs have a lot more “breathing space”; whereas before we would cut right in and bash the hell out of it, there’s more dynamic flavour in the new EP.  The musical ideas take time to progress and there are more variations as a result.

3.You label your music as 'blood metal' can you tell us a little bit about the tag?

That originally came about because we didn’t fit into either the death or black metal categories; it’s a reference to the iron in our blood and relates to metal in our hearts through that.

4.Your lyrics cover death, war and torture, can you tell us a little bit about your interest in those topics?

A lot of it is based on the idea of triumphant misery.  Gorification and revelment in the undesirable yet ultimately inevitable.  Our interest in the subject is entirely recreational.

5.One of your songs was about the Finnish, are the band members interested in Finnish Mythology?

We all fell in love with Finland when we first went there; it’s probably the most heavy metal country in the world, and it has a lot of parallels with Scotland in terms of the darkness and depression, the alcoholism and the rivalry with larger neighbours.  I became obsessed with Finland for a while, with its history and people;  I learnt the language and watched documentaries about their creation mythology and their wars, and really Suomen Susi was my tribute to Finland and their people.  The more you learn about them the more you find they are an incredible people, and so distinct from the rest of Europe.  The melody actually came to me in a dream, and in the lyrics I ran through some of my experiences there and the wisdom of some good friends I made there, as well as touching on the historical content of the winter war.

6.What is the meaning and inspiration behind the name 'Achren'?

“Achren” is the old Celtic otherworld; it’s a parallel world where the “others” live- the Sidhe.  It made sense for me to take something from Brythonic (Welsh) Celtic, because although Scotland is associated with the Goidelic (Irish) Celtic people, the lowlands were really Welsh blooded.  I read up on a lot of history and mythology and between that connection and the whole idea of being part of another world seems to fit where we as a band are.

For me Metalcamp in Slovenia was a special one, mainly because it was the biggest stage we’d played on up to that point, and the crowd was something we’d never really experienced before.  In general our shows involve a lot of sweat and fury.

Next up for us is Beermageddon in August in the English midlands.  After that we’re pretty much into hibernation til the next album out, although there might be the odd special show in the meantime but nothing confirmed as yet.

9.Your releases have came out on Ceol Dorchas Productions, can you tell us a little bit more about this label?

Ceol Dorchas is my vehicle to release our music;  there isn’t much in the way of music industry for metal in Scotland so this was the best option for us in terms of control and promotion. In a lot of ways, the industry has changed and it can be a good option to keep control of the release process and split off the other parts of band "management"; it's worked out well for us so far.

10. On a worldwide level how has the feedback been to your music by fans of black and death?

So far it’s been confined to Europe mainly, but it’s been really good.  We have some real hardcore supporters in Scotland here and down South, plus Germany and Finland- the countries made of heavy metal.

11.Are any of the band members involved with any other musical projects?

Creatively Scott has his own dark ambient project to give him an outlet for that side.  Myself and John don’t in a writing sense but we do a fair bit of session stuff for various bands; we both played in an Argentinian folk metal band called Skiltron last year; John works in a music shop here so he always ends up doing bass or guitar work for some local celebrity at some point and I’m just back from playing a show with Destroyer 666. I’ve also done some bagpiping for a few bands, metal and otherwise, over the years.  I love playing with other musicians because you’re never done learning and it’s the only way to do it but in a creative sense Achren is the king.

12.When can we expect a full length album and also where do you see the band heading into musically during the future?

Well, we should have the next album recorded by the end of the year.  How long it takes after that is anyone’s guess as usual but we’re definitely planning to get back out on tour as much as possible next year.

13.What are some of the bands or musical styles that have had an influence and also what are you listening to nowadays?

Right now I’m listening to Nachtmystium’s Assassins.  That’s probably about as recent as it gets;  to be honest I think a lot of new metal is way too overproduced- every album has the same drum sound, everything is note perfect.  I’m not interested in that- you need some kind of raw edge to express the personal style of the musicians across.  Too many bands right now sound like their record label or producer.

Stereotypical stuff really- motorbikes and engineering.  Nothing better than some kind of machine designed to  travel fast as hell.

Posted by OccultBlackMetal at 5:40 PM No comments: 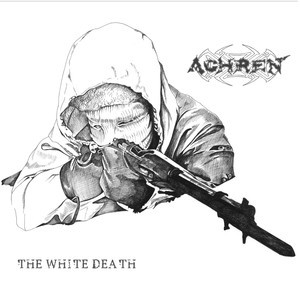 A  very  melodic  and  old  school  melodic  black/death  metal  sound  starts  off  the  ep  along  with  some  blast  beats,  powerful  bass  lines  and  a  good  amount  of  thrash  elements  before  adding  in  some  black  metal  screams  and  death  metal  growls  and  the  music  also  alternates  between  mid  paced  and  fast  parts.

Achren  creates  a  very  catchy  and  melodic  mixture  of  black,  death  and  thrash  metal  with  their  musical  which  is  very  heavily  influence  by  the  old  school  Swedish  style,  the  production  sounds  very  professional  while  the  lyrics  cover  death,  war  and  torture  along  with  one  the  songs  covering  Finnish  Mythology.

Posted by OccultBlackMetal at 3:27 PM No comments: