Aside from everything involved in putting the album out, we’ve been working hard to make sure we nail everything live, playing some shows, and working on new material.

2.In November you have a new album coming out, what are some of the things the band done different musically on this recording that you were not able to do on previous releases?

Clean singing. Something like half the vocals on this record are are sung (more or less) clean. Adding clean vocals wasn’t something we really set out to do, as much as it was something the songs we were writing were calling for.  We also spent time working out a conceptual soundscape through and between songs.

3.This is your first release in 4 years, can you tell us a little bit more about what has been going on during that time span?

Working, traveling and moving. Our hardest problem for a while was making time for the band through all the different changes from work scheduling and vacation planning. We try to play gigs fairly regularly and spent a lot of time writing and working on the music on this album.

4.In the beginning the band played more of a death metal style but over the years have evolved more in a black, sludge or post metal direction, what was the decision behind the musical change?

We never really set out to play a particular style, so we’ve moved with our musical interests and our development as songwriters. Our music has been getting more complex through the years and so that often prompts changes in tone and aesthetic. We’ve always followed a more linear, narrative approach rather than a cyclical structure. It’s also hard to only write dark-sounding music, it’s nice to be adding more melody and colors to our palate.

5.What is the meaning and inspiration behind the name 'Myopic'?

Derived from the word “Myopia” meaning nearsightedness, in a literal sense, or lack of foresight, long term plans. We (most likely) chose it because it sounded cool, but it’s since become sort of a representation of the band’s unwillingness to define itself. We write what we want to hear.

The front cover is inspired by the lyrics and concept for the song Pillars of Time. The album follows a man wandering through a deserted world, having visions and memories of the past. It’s not entirely clear what killed the population and left the world barren, only hinted at in places. In Pillars of Time he finds these great monuments to an ancient civilization, still standing because of their great size.  The back cover is based on the lyrics to Resting Place and the conclusion of this story. The art was done by Casey Drogin, who also used to be in the band before Myopic released anything.

Within the last year we played with Thantifaxath at Atlas Brew Works in DC, that was a great show and a great venue, especially since we work in the beer industry as well. After the release of Crawling Mountain Apogee we played a Grimoire Showcase at Metro Gallery in Baltimore. It’s always nice to play with all the talent on our label. In 2016 we played Shadow Woods Metal Festival with a ton of amazing bands. The whole weekend was incredibly fun. Our stage performance is all about playing as tight and perfect as we can while still putting as much energy and emotion in as possible. We’ve been working on making the set a cohesive whole as well, a lot of consideration goes into song order and how one song flows into the next.

We’re in the process of stringing together a small tour this winter with At the Graves.

9.On a worldwide level how has the reaction been to your music by fans of black, sludge and post metal?

Actually worldwide our biggest fan base might be in Russia. A few years ago we somehow found that a Russian torrenting website had stolen our EP ‘Vacuous’, uploading for download on their website, and even watermarking our album artwork. Shortly after, we had our biggest spike of listens ever on our bandcamp.

We’re a band that likes to change and go in new directions, it’s hard to predict, but I think we’ll see a continuation of our favorite aspects of this album as well as branching out and trying new things.

We tend to play with a lot of different genre blends based in blackened atmosphere and post-rock energy. Some influences over the past two years have been: Yob, Gojira, Meshuggah, ISIS, Emperor, High On Fire, The Chasm, Immortal...

We all have visual art hobbies as well, photography, design, painting. We homebrew beer, mead, and wine, and play Starcraft 2 as a team.

We hope our listeners enjoy the album and all the work put into it. We put a lot of thought into the track order and presentation, and hope people will listen to the whole album. It’s somewhat of a concept album, so it’s best experienced that way, as an album, and not just a collection of separate songs, which seems to be getting less common these days, and if you live around the Washington, DC area, come and see us live!

Posted by OccultBlackMetal at 5:39 PM No comments: 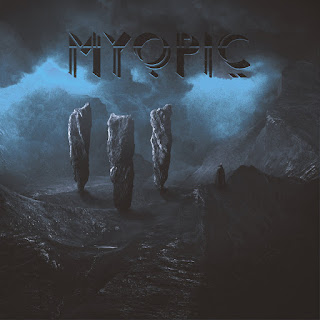 Myopic  plays  a  musical  style  that  takes  post  black,  progressive,  sludge  and  doom  metal   and  mixes  them  together  to  create  a  sound  of  their  own,  the  production  sounds  very  professional  while  the  lyrics  cover  dark  and  philosophical  themes.