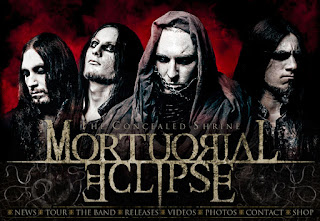 After finished recordings we did some tours in Chile and Brazil, being part great festivals and performing in small venues. Now we are working on some gigs of presentation for this new release and getting ready for upcoming tours.

Once released our first album we had the feeling that something bigger can be created with the same formula but getting deeper into the Orchestra as main element, we explored that universe and as a result we came up with a very eclectic result. URUSHDAUR is a combination of brutal music and dark atmospheres with some ethnic essence.

3.This is your first full length in 6 years, can you tell us a little bit more about what has been going on during that time frame?

The band was in a transition process when “The Aethyrs´ Call” was finished. It was my debut as singer, until that moment we had front man singer like part of the band. After the recording I had to develop my skills to take these songs to stage and we needed to make the band ready for a higher level exigence.

4.Your lyrics cover Occultism, Old Wisdom and Ancient Cultures, can you tell us a little bit more about your interest in these topics?

These topics are very closely related, we can say that you can not talk of any of them without enter in the others. We find a huge inspiration on these topics and an endless fount of knowledge to dig and develop our message using them as a bridge more than a goal or a point of adoration.

5.What is the meaning and inspiration behind the name 'Mortuorial Eclipse'?

We were ready to perform live back in 2007 and we didn’t have a name yet. Actually we had a lot of different ideas and combinations but none really convinced all of us and we changed from rehearsal to rehearsal. “Dying Eclipse” or “Thy Tempest” were some of the first choices but I can’t remember how we finished with “Mortuorial”( a not existing word but very graphic). The final choice evokes the death as an ecliptic restless cycle beyond human wisdom.

For sure “Southern Stigma Tour” around Russia and Europe was the most extreme experience the band had. We were part of some amazing festivals as Moscow Black Metal Convention(Russia) and Metal Crowd ( Bealrus ) . Another night to remember was back in 2014 when we supported the Polish Behemoth,band that is a big influence for me.

Take URUSHDAUR as far as we can is tha mayor goal now that the album is released. North America and Central Europe are on the eye for next year.

8.On a worldwide level how has the feedback been to your music by fans of black, death and symphonic metal?

As we make some king of Hybrid critics are very disparate. Purists are always against these proposals but it was never and obstacle to develop our style as mind of people is getting more open and the need of new options is constant. We have a Black essence, Death Sound and a strong Symphonic element; this is how band was born and we are getting deeper into this path  with this new material.

We still feel there is a lot to develop in the line we are, even we are very proud of our latest CD we are exploring and going further to take our proposal to a higher level and keeping all time breeding new music .

Our influences are brutally open and its very difficult to find where they start and finish, from OSTs to Old School BM. From Middle East Ethnic to Tampa´s DM and this is all time growing.

Wine? So far , everything we do is somehow connected with music and art. It gets very difficult now to think in our lives in a Non Musical Way. We really enjoy what we do and it give us strength to face all the shit of the world without backward steps.

URUSHDAUR is a deep trip that many metalheads will enjoy, we think this work will open a new chapter for the band and we are ready to do all in our hands to deliver this proposal to as far as our strength let us do it. A long journey has just begun. En el caos está la verdad!

Posted by OccultBlackMetal at 1:57 PM No comments: 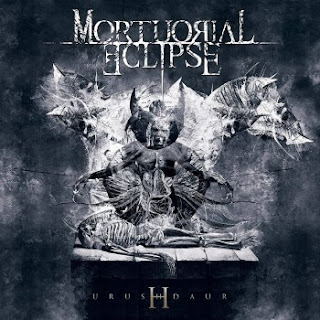 Mortuorial  Eclipse  plays  a  musical  style  that  takes  symphonic  black  and  brutal  death  metal  and  mixes  them  together  to  create  a  sound  of  their  own,  the  production  sounds  very  professional  while  the  lyrics  cover  Ancient  Cultures,  Heritage  and  Wisdom  themes.

https://www.youtube.com/watch?v=C3Nnb2Nheik
Posted by OccultBlackMetal at 7:53 PM No comments: