1. Can you give us an update on what is going with the band these days?
We have just had our Launceston album launch show which was great, now we’re gearing up for the Hobart album launch and also just about to start learning some of the new material for the next album.
2. How would you describe the musical sound of the new album and how it differs from previous releases?
I think it’s a lot more versatile than the demo we released back in 2011 and a lot more going on particularly with the vocals and keyboards. But it sticks to the same Swedish Melodic Black Metal sound.
3. What are some of the lyrical topics and subjects the band explores with the new release?
On the album the lyrics are mostly about nature and solitude, it feels like people are always caught up in their lives and never stop and enjoy the world around us and i feel that music can be sometimes be a way of escaping all that.
4. What is the meaning and inspiration behind the bands name?
The band’s name translates to Ancient Dark Winds, which in latin (Atra Vetosus) sounds awesome.
What are some of the best shows that the band has played so far and how would you describe your stage performance?
We have played some great shows and met heaps of awesome people and bands, it’s hard to mention just a couple but our NSW shows were fun. For me there was something really special about our first ever gig, was in March 2012 in Hobart, Hobart and Launceston shows are always great!
6. Do you have any touring plans for the future?
Yeah we hope to play all around Australia and eventually if we can afford it as a band to tour other parts of the world as well!
7. Currently you are signed to Immortal Frost Productions, how did you get in contact with this label and how would you describe the support they have given you so far?
Slikver founded IFP and was involved with it for a number of years, and eventually stepped down from his role there and its all run from Belgium now.
8. On a worldwide level how has the feedback been to your music by fans of melodic black metal?
The reception has been great so far, Melodic BM fans seem to pick up the influences from Naglfar, Vinterland and all those Melodic Swedish acts which is great.
9. What is going on with the other musical project these days?
haha well there’s a lot there. Slikver and myself (Thorodan) have a few active projects at the moment.
Lost in Desolation a Depressive Black Metal project with our first full length nearly complete.
Oblivaeon which is a Doom/Melodic Black Metal project with Dave Luck from Nosce Teipsum doing guitars and composition.
Slikver has his solo project Astral Winter which also has an album in the making and Hammerstorm which is folk metal.
Josef is getting involved with playing drums for some local musicians and I’m starting to work on some solo Ambient BM stuff.
10. What direction do you see your music heading into on future releases?
At the moment the next album is going to continue on with the theme of the last album but will have even more melodic aspects, more keyboards and maybe even some female vocals.
11. What are some bands or musical styles that have influenced your newer music and also what are you listening to nowadays?
Main influences on the music is pretty much everything from the mid 90’s Swedish Melodic Black Metal scene, although we all listen to different styles of music and that will come out a bit in the music.
12. Outside of music what are some of your interests?
We all have lots of different things that keep us busy outside of music, I really enjoy doing video, audio and graphic work so i keep myself busy doing all sorts of things there. Josh has recently been hiking up in the Cradle Mountain area and the photos he has shown look amazing. Joe is an artist and is always working on arts stuff. We all have many interests, Lopez works as a chef and Damon knows just about everything about music and movies.

Any final words or thoughts before we wrap up this interview?
Thanks for the interview and thanks to all those who took time to read all this,We hope you guys are all enjoying the new release and look forward to much much more from Atra Vetosus in the coming years!
-Answers by Josh ‘Thorodan’ gee

Posted by OccultBlackMetal at 11:49 PM No comments: 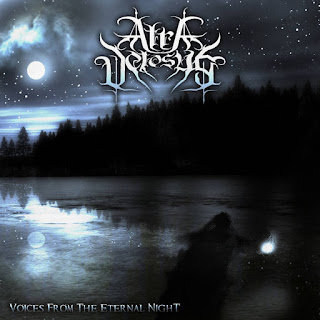 Rhythm  guitars  range  from  slow,  mid  paced  to  fast  melodic  black  metal  riffs  that  are  very  dark  and  melodic  sounding,  while  the  lead  guitars  are  very  dark  and  melodic  sounding  black  metal  guitar  solos  and  leads,  as  for  the  classical  guitars  when  they  are  utilized  they  use  finger  picking  and  full  chords  to  enhance  the  dark  atmosphere  of  the  recording.

Posted by OccultBlackMetal at 10:53 PM No comments: