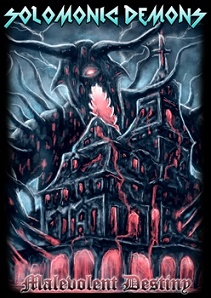 Solomonic  Demons  creates  another  recording  that  takes  the  melodic  and  old  school  style  of  black, death  and  thrash  metal  and  mixes  them  together  to  create  a  very  heavy recording,  the  production  sounds  very  professional  while the  lyrics cover  dark, violent, war  and  occult  themes.

Posted by OccultBlackMetal at 2:14 PM No comments: 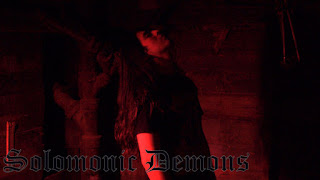 
2.How would you describe the musical sound that is presented on the recordings/


I focus in Keeping the sound  Raw and Clean; this may sound a contradiction but Metal genre has so many subgeners so is Possible even if Im not an Engineer. I know how I wanna sound it has to be Heavy Thrash and Death.


3.What are some of the lyrical topics and subjects you explore with the music?


The Main Idea of Solomonic Demons was Demonology I was so obsessed with the grimoire of  the Lesser key of Solomon in 2009 that I decided to create a Project only to focus on the Invocation and description of the Demons founded on the spell books. The album Firestorm is divided in 2 parts  the first part is the Invocation  that focus Lyrics on the topic mentioned already Demonology theres no Satanic themes so far on the lyrics do not get confused , The Second part is the Evil part  were Lyrical themes are more about Death, War and Real world issues also the music is more faster and

less melodic in this part of the album.


4.Your name is Beelzebul and the band name and some of the songs are based upon the Goetia, can you tell us a little bit more about your interest in the occult?


Beelzebul cause destruction through tyrants,  cause demons to be worshipped among men, to excite priests to lust, to cause jealousies in cities and murders, and to bring on war when you hear Solomonic  Demons thats what you expect and only the prince of Hell can sign that thats why I call myself Beelzebul, Like I Mentioned Before I was obsessed with Demonology on some point of my life and maybe Im still

thats the Flame that Solomonic Demons always going to need.


5.From 2008 to 2013 there was no music being released can you tell us a little bit more about what was going on during that time frame?


The Project had to many Music changes over the years I never was satisfied until 2013 maybe 10 demos were recorded before I cud present a solid Idea thats why so many years.


6.With this musical project you record everything by yourself but also have a full band on the side, how would you compare the two?

beats  is more nasty like a wild child running with no focus more than destruction.


7.On a worldwide level how has the feedback been to your music by fans of metal?


8.What is going on with your other band these days?


9.Where do you see yourself heading into as a musician in the future?


I love Metal and I have to many influences and I cant list them all but I can list Solomonic  Demons influences: Atomizer ( Aus ) Coven ( 60s Rock band ), Amorphis, Angel Witch, Destroyer 666, Crematory, Deathhammer, Decapitated, Megadeth, Dissection, Devil Lee Rot, Mercyful fate, Metalucifer and a few more that I don't remember right now. I collect Vinyls Records I love to buy music from New bands that I like and Oldies reiused

Posted by OccultBlackMetal at 10:10 PM No comments: 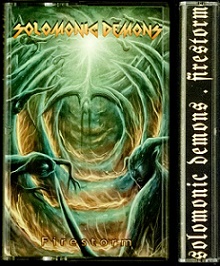 A  very  heavy  thrash  influenced  sound  starts  off  the  album  along   with  some  high  pitched  black  metal  screams  and  after awhile  melodies  are  added  onto  the  recording  and  the  solos  and  leads  use  a  great amount of  melody  while  also   adding  in  a  touch  of  traditional  metal  and  as  the  album  progresses  growls  make  their  presence  known.

Solomonic  Demons  plays  a  musical  style  that  takes  heavy,  thrash,  death  and  melodic  black  metal  and  mixes  them  together  to  create  a  musical  style  of  his  own,  the  production  sounds  professional  while  the  lyrics  cover  Goetia,  Evil,  Witchery,  Magick  and  Demons  themes.