1.Can you give us an update on what has been going on with the band these days?

The new album, "The Winter War Symphony" will be out in 25th of November via Wormholedeath. Therefore we have took care of some promotional stuff with the label and media. We are also planning a music video or two. Meanwhile some new material is also being written and naturally we rehearse our playing.

2.Earlier this year the band released a new recording, how would you describe the musical sound that is presented on the recording and also how does it differ from the stuff you have released in the past?

To put it short, it is epic death metal. Some people have compared it to early Wintersun. I think our work is more brutal, but I guess it is still a fair comparison. When we think about our older works, the new album is definitely more melodic than our previous ones. Everyone used to compare our music to Dissection earlier, but I haven't heard that once when it comes to the songs of the new album. So hopefully, we are also a bit more unique nowadays.

3.This was the first release to be put out in 4 years, can you tell us a little bit more about what was going on during that time frame?

Well, when "Infidel Angel" was published in 2010, the album release was followed by a lot of live shows. They kept coming till the spring of 2011, when we decided it is time to start work on new material. We had couple of line-up changes by then and the process of rehearsing and writing the new material took it's time. We finally recorded the new album, "The Winter War Symphony", in December 2012. Our previous label agreed to publish it, but after couple of delays of the release we ended up in the situation where the label was sold and the new owners were not interested in the album. By that time it was already late 2013 and we were naturally a bit pissed off. We lost a guitarist and a bass player around that time. The surviving members finally published the album as a promo in the spring of 2014, only to seek a label and send the work to medias. When Wormholedeath contacted us, we signed the deal they offered without a hesitation. So, long story short, it wasn't our easiest album to make.

The entire new album is loosely based on a novel called "Korpisotaa" by Finnish author Pentti Haanpää. The book tells about The Winter War, a war between Finland and Soviet Union during the beginning of World War II. The Winter War lasted from November 1939 till March of 1940 on one of the coldest winters of the century. We thought lyrical theme like that fitted perfectly to the music on our album, as the atmosphere is pretty cold.

5.What is the meaning and inspiration behind the name 'Frostbitten Kingdom'?

We just took it from the Immortal's song "Grim and Frostbitten Kingdoms". We were huge fans of Immortal's music by then, like we still are. And naturally, we thought the name sounded so fucking cold, exactly like we tried to sound back then.

You gotta come see yourself as soon as we are starting the live shows again. We have always tried to be energetic on stage, as we share the opinion that nowadays metal bands in general don't focus enough on performing. I think there is some decent live videos on Youtube, where you can get some kind of picture of the shows. It's hard to pick any favorite shows, as we have done this for pretty long. To pick one, it was awesome to open for Venom in Krakow, Poland a few years back. It is also always nice to play on our hometown, where we probably have our biggest support.

We have nothing scheduled by now. We will get back on that after we have completed our line-up, published the album and finished at least one music video.

8.WormHoleDeath Records are re-releasing the ep you had released earlier this year, do you feel this will help get your music out there more well known?

Actually we never released the album to anyone but medias and labels, so basically Wormholedeath are first to publish it to the listeners. Wormholedeath is highly professional label and we know they work hard to get us more attention. So sure, we hope that after they have published the album we will get some new listeners.

When it comes to reviews, basically each and everyone of them has been positive, when we talk about the new album. We naturally hope that metal fans will like it as much as the critics have. Those few metal fans - outside the labels and medias - who have already heard the album have liked it, as far as we are concerned.

10.Are any of the band members currently involved with any other musical projects or bands these days?

Our drummer Sami Vainio plays also for the Finnish death/sludge metal band called Concrete Icon. Their debut album "Perennial Anguish" was released last year. For the fans of the genre, we would strongly recommend checking that out.

Probably to more imaginative dimensions. More different kind of sounds, less repetition, more melodies and influences from other genres... maybe stuff like that. But you never know, we do not plan these things much. And the new material written after "The Winter War Symphony" is anyway pretty dark and heavy. So, we'll see when the next album comes out.

When we first started, we tried to create an evil mix of Scandinavian black metal and Florida style death metal, even thou we have never thought ourselves as a black metal band. The death metal stuff has always been more present in our music, if we don't count the vocals. Nowadays we think our music is basically just epic death metal with small nuances of black metal, classical music and rock. If we must name our biggest influences, they might be Death, Dissection and Suffocation.

We actually have really little of those.

Not really. Thanks for your interest and be sure to check out "The Winter War Symphony"! 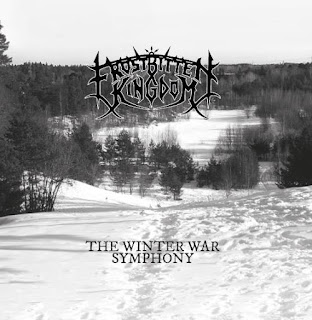 Acoustic  guitars  and  atmospheric sounds  start  off  the  ep  and  you  can  also  hear  elements  of  classical  music  being  added  onto  the  track  and  after  a  couple  of  minutes  heavier  guitars  and  folk  music  elements  are  added  into  the  music  along  with  a  symphonic  background  which  also  leads  up  to  grim  sounding  black  metal  screams  making  their  presence  known  on  the  recording.