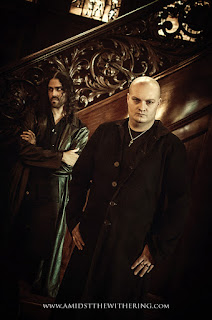 Serge Farinas: Well, John and I have retreated back to our usual hermetical sun and people-shunning ways, haha. We’ve been making a pretty concerted effort to quickly write a follow-up album. We have the basic structure for four songs and ideas in various stages of development for many others. The asshat (John) wants another hour long album, so I guess we’ll have our hands full! Other than that, we’ve been trying to get the word out about our recent album. We’ve been working with Melissa of FullBlast!PR who has been great.

2.Recently you have released a new album, how would you describe the musical sound that is represented on the recording and also how does it differ from the album you had released 10 years ago?

Serge Farinas: The original album was a pale reflection of our potential. We were too poor and plagued by other problems to release something better. “The Dying of the Light” represents the music much closer to how we had envisioned it. I would describe the music as influenced by symphonic black and doom metal, though I’d say we are not really wedded to those categories. At least I don’t think that we sound like we are trying to be contained by them. The lyrics deal with some pretty depressing topics, such as mortality and the smoldering of love that has faded but never completely dies (arguably more depressing than the death of love).

3.The band has been around since 2000 and so far there has only been two albums, can you tell us a little bit more about the gap between releases?

Serge Farinas: Well…long story short we’ve had a pretty rocky and unusual history. We were all really good friends (the core band also included Jason Cartee and Cliff Widener) but internal tensions finally ripped the band up some time in 2004. There was a load of problems we were dealing with such as poverty, relationship problems, jobs and especially my being a depressed asshole (still sorry!!). John and I went on to work on other projects but finally we became close friends again and decided to revive ATW in about 2011. We started to revamp the old stuff and set aside ideas for a follow-up. ATW is truly an undead abomination! We can’t kill it and it’s not for lack of trying, haha.

Serge Farinas: I’ll leave this to the lyrical asshat.

John Hembree: Ha! Well, on “The Dying of the Light” there was a wide range of topics. We threw in some anti war topics, insanity, sexually deviant behavior, betrayal, murder, lust, lost love, examples of organized religion being jackasses and as Serge said earlier a song about how although love never truly dies it weakens to the point that it is a smoldering “dying light” that can’t hold back the darkness of life but burns just strong enough to cause pain… Explaining that last song to my wife was interesting lol.

On the next album I’m not completely sure though. So far there is a little bit of attack on religion again as well as a song that has become my favorite named “Icarus”. The original myth of Icarus was written as a cautionary tale that pretty much served as warning to not to be too ambitious. I am planning to instead write this story (lyrically) where it gives honor to explorers, scientists and the like who have been willing to risk their careers, names and even their lives in the name of discovery. This next album is bound to be as eclectic in topics as the first though so there is little more I can tell you.

5.What is the meaning and inspiration behind the name 'Amidst The Withering'?

Serge Farinas: John came up with it. It reflected our pretty negative views of society and humanity at the time. John meant for it to be open ended enough to encompass all the ways in which society and nature is being destroyed around us. To me it conjures up the feelings of despondency and alienation of being an individual witnessing all this self-destruction.

6.Currently there are only 2 members in the band are you planning on expanding the line up in the future or do you chose to remain a duo?

Serge Farinas: That’s a good question. We are pretty happy as is and I’m sure no one else would want to put up with our shit, haha.

John Hembree: That’s Serge’s nice way of saying that we are too controlling to let someone else have a say in the writing of the music. We like having exclusive say in what the music sounds like because we are assholes like that lol…

John Hembree:The best gig I can remember  was at a place called "The Hangnail." The place was tiny and built more like a hallway than a venue but we and the other bands had a great turnout and though the people were packed in there like clowns it was a really receptive, energetic and friendly crowd. It was a very intimate show and I felt more like the crowd was with us making music than observing us. That was a great day. During that time I was the drummer and a pretty energetic one at that. All of us were really into the music and so I think we gave a pretty powerful performance back then.

Serge Farinas: If ATW ever became popular enough (and don’t ask me to define enough) we’d consider having a full band and touring but right now we feel our efforts are best spent writing the best music we can. It’s just incredibly uneconomical financially and time-wise to tour and we definitely need jobs to finance this musical addiction.

Serge Farinas: We are pretty self-contained and we like the independence. If we are approached I suppose I’d consider the offer based on what the terms are, but I’m pretty skeptical of what labels can offer most bands these days.

John Hembree: Same here. About the only thing that a record label could offer us now is a larger marketing budget but even then they would just take all the money from our CD sales so the trade off would probably be our independence for more publicity and yet no additional money. I’m not sure if that would be worth it.

10. On a worldwide level how has the feedback been to your music by fans of black and doom metal?

Serge Farinas: So far the feedback has been really encouraging. We’ve received a number of great reviews and the public has been very positive. Even the worst criticism we received (by some jaded blackmetal head) contained lots of compliments. We don’t do music for the adulation but I’ll admit it’s nice to hear!

John Hembree: Please send all your compliments to me and all complaints to Serge Farinas.

Serge Farinas: That’s a good question! And I don’t know. ATW has always been an experiment of sorts and we don’t feel completely committed to any one category. I’m pretty sure it will remain dark and “symphonic” in some way and that we’ll prioritize melody and good song writing over outright brutality. So far the new stuff we are working on is pushing a bit more on making the heavy parts heavier and gloomy parts doomier. As for what topics we’ll cover? We are still working on that.

Serge Farinas:  I have fairly broad tastes in music. Some of the bands we have been into since the beginning that have influenced us are My Dying Bride, Dimmu Borgir, Old Man’s Child and Type O Negative. I’ve recently been listening to a fair amount of Swallow the Sun, Ovid’s Withering (no relation!), Agalloch and Septic Flesh. I also listen to orchestral music for inspiration. There’s so much good music out there by very talented people!

Serge Farinas: I love reading and like to cover such topics as science (especially ecology), politics and history. I’m fairly fanatical about trying to understand the world. I also like to get outdoors when I can and recently got into archery.

John Hembree: I’m also a science nerd with a huge interest in future technologies. Other than that I read a lot, debate, cook, watch movies and play too many video games.

Serge Farinas: I’d like to say thank you to this zine for giving us this interview! I’d also like to thank anyone who has even given the least shit about us. Even with so many things competing for your attention you gave us a little bit of your time. Whether you loved or hated us, we feel honored for the chance you gave us.

John Hembree: All I can say is thank you to all of the people who have been so receptive and positive about our music. It really does help fuel an already intense passion for music. 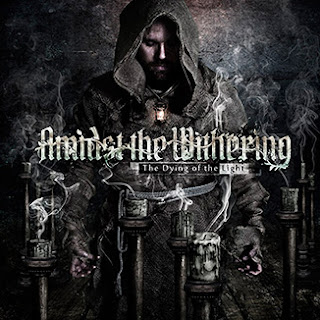 Posted by OccultBlackMetal at 11:59 PM No comments: