1.For those that have never heard of you before, can you tell us a little bit about the band?
1. The band is currently comprised of six members. Will Rohirrim and Justin Buller on Guitar, Adrian Steve on keyboards, Nikos Riekstins on drums, Ethan Wissman on bass/vocals and Jake Wayman on vocals. We started early 2016 and have been working diligently on shaping our own lane in the metal world. We are based out of Austin Texas.

2.You have an ep coming out in June, how would you describe the musical sound that is presented on the recording?
2. The music is our take on combining  some of our favorite metal genres.  Each song has it's own thing going on but the ep has a consistent stylistic thread running throughout  which makes it come together as something all our own.
Fans of melodic death metal, folk metal and even black metal should be able to take something away from what we are doing with the band.

3.You label your music as 'primal archiac extreme metal', can you tell us a little bit more about this term?
3. The atmosphere of the music has this real primal, archaic spirit to it. It makes you think of the times of old.

4.What are some of the lyrical topics and subjects the band explores with the music?
4. The ep title track  "Elemental Reclamation" is about nature reclaiming the planet back from the human race. The destruction and rebirth of earth. "Formless Aeons" is basically about the creation of the universe and "Vangrimst" is a battle song through and through.

5.What is the meaning and inspiration behind the name 'Wolvenguard'?
5. The Wolvenguard is one of our local native american tribes. We felt it fit the sound of our music and relates to future topics we are looking to write about.

6.What are some of the best shows that the band has played so far and also how would you describe your stage performance?
6. We are still working towards our first few round of shows.

7.Do you have any touring or show plans for the future?
7. No plans set in stone yet but we are definitely driven towards hitting the road in the future.

8.Currently you are unsigned, are you looking for a label or have received any interest?
8. We are currently on the search for the right fit for our brand of metal. Nothing set in stone there yet.

9.On a worldwide level how has the feedback been to your music by fans of black and melodic death metal?
9. We have received an overwhelming amount of amazing feedback from people all around the world. It's great seeing that people are connecting with what we are doing with the band.

10.What is going on with some of the other bands or musical projects these days that some of the band members are a part of?
10. Ethan's band Cerebral Desecration plays regionally quite often and has a solid fanbase. Justin's band khringe plays regularly and his other band In oblivion is till active as well. Niko's plays for bands Sitri and Death Motif. They both play regularly in the Austin area. Will's other band Vesperian Sorrow is writing a new record.

11.Where do you see the band heading into musically during the future?
11. We are recording a full length record sometime in the near future, which will expand on the sound established on the ep. We are motivated towards playing live, touring.

12.What are some of the bands or musical styles that have had an infleunce on your music and also what are you listening to nowadays?
12. Wolvenguard is mainly influenced by bands such as Amon Amarth, Borknagar, Bathory, Enslaved.
The newest Borknagar and Insomnium records have been on heavy rotation.

13.How would you describe your views on Paganism?
13. We do take up the pagan metal tag when describing the band so we do stand behind several different pagan viewpoints, philosophically and spiritually.

14.What are some of your non musical interests?
14. Spending time with friends and family, cooking out and catching a good metal show are all a few things we enjoy doing outside of the band. 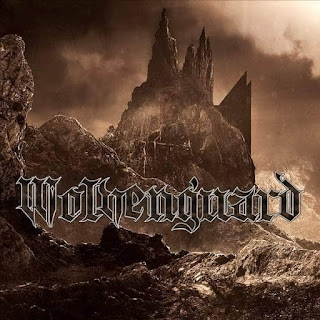 Wolvenguard  plays  a  musical  style  that  takes  the  melodic  styles  of  black  and  death  metal  and  mixes  them  together  to  create  their  own  style  of  primal  archaic  extreme  metal,  the  production  sounds very  professional  for  being  a  self  released  recording  while  the  lyrics  cover  dark  themes.

https://www.youtube.com/watch?v=Y5Y5f0V4Deo
Posted by OccultBlackMetal at 3:05 PM No comments: