As a fan of many different styles and subgenres of metal, when I created Sorrow Enthroned the intention was to mix sounds from all the different bands that I love. It leans mostly into melodic black and brutal death metal territory, however there are many other influences that can be heard here and there. I started it as a form of therapy and release, and the music keeps evolving as I do.

2.So far you have released a couple of full lengths, an ep and a few singles, musically how does each release differ from each other?

The ep I released in 2019 and the full length “The Embrace of Nocturnal Sorrow” both have a strong raw black metal sound, with melody and some deathcore influences. The lyrics are much more grim and the music more abrasive. The experience I gained in these two released pushed me forward into recording a handful of singles and experimenting with other sounds. The latest release still has these styles, yet more spread out, with the gaps being filled with other influences.

3.On the new album you covered some occult, left hand path and Thelema themes with your lyrics, can you tell us a little bit more about your interest in the dark arts?

Occultism saved my life, I was very depressed and recovering from drug addiction, and the left hand path offers a hidden light to those of us who were born of the devil.

4.What are some of the other lyrical topics and subjects you have explored so far with the music?

I have explored topics of death and depression previously, occultism currently, maybe ill do a concept album for the next one.

5.What is the meaning and inspiration behind the name 'Sorrow Enthroned'?

Sorrow Enthroned came to me as one of the ageless paradoxes of the human existence, the feelings of exaltation and misery we experience through the years, light and dark and good and evil. This world has much darkness in it, and it is not going anywhere, I think the only choice is to embrace it and exalt the self as it will always be a part of us. There is great and powerful magick there.

The artwork is a sigil I created for the idea of will in motion, representing a consciousness moving from one world to the next (which is why the planetary sigils differ from traditional hexagrams). This motion is reminiscent of the Ouroboros, being cyclic, or the Serpent of eden seeking knowledge, or the wandering spirit who lives yet still.

7.Withthis project you record everything by yourself, are you open to working with other musicians or do you prefer to work solo?

I would love to work with other musicians, I am open to anything.

Inbetween working and going to school for music, I constantly create simply for the love of it. I feel like there is unheard music around us in the air constantly, and it would be a waste to not create something from it.

Yes, I received some label interest on the last album, I am absolutely interested in looking into what is out there and what kind of services they can offer.

10.On a worldwide level how has the reaction been to your music by fans of black and death metal?

People seemed to enjoy “the embrace of nocturnal sorrow”, they seem to really enjoy “thelemic grimoires”, the feedback so far has been great.

11.Where do you see yourself heading into as a musician during the future?

I would love to work as a sound engineer or session guitarist. Sorrow Enthroned isn’t going anywhere and I will keep evolving the sound. I could see myself playing in a band at some point as well.

As a whole, I take a lot of inspiration from Dark Funeral, Incantation, The Black Dahlia Murder, Suffocation, Behemoth, Dying Fetus, Mournful Congregation, Carnifex. This year while working on the album I had the new Incantation record on repeat for a long time, it is incredible. Same with Ulcerate, Defeated Sanity and Inferi, all great releases this year 2020.

Thelemic Grimoires is on Bandcamp, Spotify, Itunes and Youtube, also the stoned ape theory is real.

Posted by OccultBlackMetal at 6:46 PM No comments: 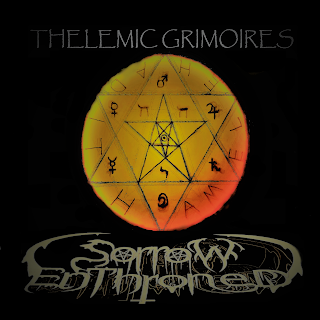 Posted by OccultBlackMetal at 4:24 PM No comments: