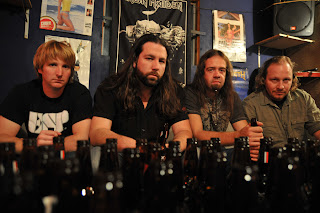 We're currently doing gigs in Canada and promoting our last album Chernobyl Survivor.  We're also in the writing process for our next album, untitled for the moment.  Everything is going great so far and we have a lot of songs almost done.


2.       How would you describe the musical sound of the new album and how it differs from previous releases?


Chernobyl survivor is definitely more agressive and brutal than our previous ones, Under an Occult Sun and Wapeons of Mass Distraction.  However, it's still as melodic.  We tried to expand our musical style and add more metal elements to the songs, as opposed to only melodic black metal.


3.      What are some of the lyrical topics and subjects the band explores with the new release?


The lyrics treat subjects that are more related to the day-to-day life and things that affected us in the past years or so. We tried to avoid conspicary theories and other grand subjects.


4.      What is the meaning and inspiration behind the bands name?


Blinded by Faith is about society's beliefs and how we are often slaves to those, sort of peak.  It's more general than just about religion.


5.      What are some of the best shows that the band has played so far and how would you describe your stage performance?


We played a really great show in our hometown Quebec city recently.  The energy was awesome and everybody had a blast.  We see our shows as a party with a lot of energy and alcohol!


We dont' have any big tour really, but we always play mainly in Canada all year long.  If one day we have the opportunity do a proper tour we'll definitely go for it.


7.      On a worldwide level how has the feedback been to your music by fans of extreme metal?


We had a good reception of our last album in Asia and in Russia too (you can guess why!).  We are still working to promote our last album and have better exposure around the world.


8.  What direction do you see your music heading into on future releases?


It's gonna be as metal and brutal as ever, but with a progressive touch mainly due to the arrival of our new guitarist Benoît Filion.


9.      What are some bands or musical styles that have influenced your music and also what are you listening to nowadays?


Iron Maiden, Children of Bodom, Cradle of Filth and Dimmu Borgir are some of the bands who had a lot of influence on our music especially in our early days.


Our singer Tommy listen to a lot of progressive music form the 70's.  We think the last album from Steven Wilson is incredible and we listen to Devin Townsend, Despised Icon and  God Forbid just to name a few.


10.  Outside of music what are some of your interests?


We like video games (Guild Wars 2, Skyrim), sports (boxe, tennis) and have a good time with friends of course.


11.  Any final words or thoughts before we wrap up this interview?


Thanks for the interview and come like us on our facebook page!  Also our last album is streaming in its entirety on our web site www.blindedbyfaith.com Fuck Yeah!

Posted by OccultBlackMetal at 1:46 PM No comments: 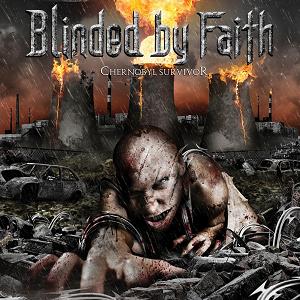 Rhythm  guitars  range  from  slow,  mid  paced  to  fast  riffs  that  combine  melodic  black  metal  and  death  metal  together  to  create  a  sound  of  their  own  along  with  some  modern  metal  elements  being  thrown  into  the  riffing  at  times,  while  the  lead  guitars  are  very  melodic  sounding  death  metal  guitar  solos  and  leads.