1. Can you tell us a little bit about the band for those that have never heard of you before?
We are a 4 piece hailing from Bielefeld/Germany founded in spring 2012. Jonas (Bass), André (Drums) and me (Mark/Vocals) already knew each other from a project we’ve had before. That project found its end after 2 or 3 months of sludgy rock’n’roll but some time later there was this new band called Mayak with Philipp playing guitars and Jonas having moved to bass – but they didn’t have a shouter, so they asked me to fill that spot. It’s my first shouting experience, I used to play bass and guitar in other bands before. After some time it worked pretty well so, yeah, here we are!

2. How would you describe your musical sound?
That’s a hard one. Everyone of us has many different preferences. Philipp is more that grunge/stoner guy, André and Jonas did more crust stuff in the past and I’m the metalhead somehow, haha. So I think our music is a mixture of mainly metal and hardcore but with many influences like stoner rock, sludge, punk and so on. We mix black metal blastbeats with offbeats and switch from stonerriffage to punkish singalong parts. Just listen to it, I’m not that good in analyzing music (is there a need for that anyway?). Our sound is very raw and loud.

3. What are some of the lyrical topics and subjects the band explores with the music?
Most of the lyrics are reflecting my view on different things like politics, lifestyles, the fucked up world we live in, life in general… but we even have lyrics about meth smoking swamp monsters trying to kill your family. We all think it’s very important to be not too serious. Sometimes. At least.

4. What is the meaning and inspiration behind the bands name?
Originally Mayak is a Russian nuclear facility complex that’s part of the Russian nuclear weapon program but it’s also the Russian word for light tower. As you might suggest, nothing of that has a meaning for us. We just like that name. It sounds cool, and its order of letters is pretty nice for a logo, haha.

5. What are some of the best shows that the band has played so far and how would you describe your stage performance?
Playing live is the reason we do this. All of us played in other bands before or still are members of other bands (Ruins, Hyena, Samara, Playbot, to mention a few) so it’s not a new thing to us. I think our liveshows are pretty energetic and headbangable. We try to carry that energy to the people that visit our concerts. Until now, we shared stages with more like locally known bands but this thursday we’re going to support Victor Griffins (Pentagram) new band In Graved. It’s an honour for us sharing stage with such a doom/stoner legend like him!

6. Do you have any touring plans for the future?
Touring for a longer time is not possible these days because most of us are hard working people. But we’re planning a larger tour this autumn and until then, the weekend trips are working pretty well for us. We’re playing anywhere for food, booze and a place to sleep. It’s all about the good times for us.

7. Currently you are unsigned, are you looking for a label and if so, what kind of label do you feel that would be a perfect fit for the music?
The first EP was a DIY-release, available on CD, tape and digital on our homepage. We hope to record our first full length release this winter. We haven’t done that many considerations about a label until now, but if you read this and you have one, just contact us! Personally a large part of bands I love are on Deathwish, Southern Lord and Relapse but I think this is wishful thinking. Yet.

8. On a worldwide level how has the feedback been to your recording by fans of extreme and underground music?
Feedback after seeing us live or listening to our EP has always been positive. People from places we’ve never been send us messages telling they really dig our music or buy our tapes and shirts. These might be the pros of social media nowadays. We’re deeply grateful for everyone checking out our stuff.

9. Are there any other musical projects besides this band or is this a full time line up?
Jonas is swinging the axe in a crustcore band called Ruins (check them out, pretty dark stuff) but like I said before, most of us have full time jobs or study, so it’s a little bit too early to speak of a full time project. Of course we would like to be something like that someday!

10. What direction do you see your music heading into on future releases?
The more recent songs are more thrashy than our first EP.  There’s more doublebass drumming, faster guitars and more blastbeats. But there still are some more positive vibes like in songs like “Another Day Will Rise” and “Cut The Ropes”.

11. What are some bands or musical styles that have influenced your music and also what are you listening to nowadays?
Like I said before, we all have slightly different musical preferences and backgrounds but we all like stuff like Kvelertak, Kyuss, Doomriders, Deadbird, Overthrow, Entombed and Thou just to mention a few more famous names.

12. Outside of music what are some of your interests?
Nothing worth mentioning (sports, etc) – most of our interests are music related. Making music, listening to music, going to shows… Jonas is also hosting shows in our hometown.
13. Any final words or thoughts before we wrap up this interview?

Yeah, thanks to the visitors for reading this and checking us out onfacebook.com/iheartmayak or mayakband.de. You can download our first EP for free! Thanks to you for the interview and for supporting us!!!

Posted by OccultBlackMetal at 3:45 AM No comments: 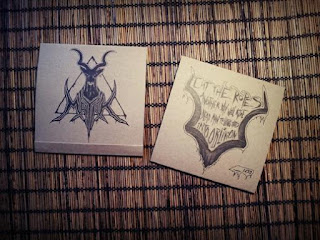